Gene editing is a very novel technology that has yet to generate much clinical data, and what Intellia has produced so far is certainly encouraging. The first look at the group’s second project, NTLA-2002, in the rare swelling condition hereditary angioedema, came in better than many were expecting.

Intellia shares sank 12% in early trade, however, with investors clearly remaining cautious about the future of this approach. The company also has yet to receive the FDA's approval to start recruiting US patients in its trials, with no progress reported on this today.

NTLA-2002 showed up to 92% knock down of plasma kallikrein, the target protein, at the highest dose tested, greater than rival hereditary angioedema (HAE) programmes have achieved, with a 91% reduction in attacks – albeit in only three patients.

The company also provided the first glimpse at NTLA-2001 in the cardiomyopathy subtype of hereditary transthyretin amyloidosis, which also showed near-total transthyretin knockdown.

Liver toxicity has long been a worry, and abnormal readings were reported for both projects. These were mild and transient and not new concerns, so cannot completely explain the share price fall. Other gene editing and gene therapy stocks were also heavy fallers this morning.

Perhaps investors are wary about Intellia pushing forward too quickly. These results justify “rapid expansion of our pipeline”, chief executive John Leonard told analysts on a call this afternoon. With almost $1bn in cash the company is not in desperate need of a raise – but perhaps a more cautious deployment of that would be preferred.

HAE was one of the first rare diseases to attract serious biopharma attention, and a range of enzyme replacement options and more targeted treatments are already available. There is also a sizeable pipeline of novel agents seeking to improve response rates and convenience – as a once-and-done offering, Intellia’s NLTA-2002 could render these efforts redundant.

That only becomes true if the project demonstrates competitive efficacy and safety, of course, and with data in only six patients available much remains to be proven. NTLA-2002 works by knocking out the KLKB1 gene in liver cells, which reduces the production of kallikrein. This protein plays a role in the sometimes fatal swelling attacks seen in patients with HAE.

What that means for attacks is more important, and here only data on the three 25mg patients is available. But this showed that attacks were virtually eliminated, and even more impressively two patients were taken off their prophylactic therapies, with no breakthrough attacks reported.

Intellia said it plans to test a 50mg dose before moving into phase 2, sometime next year. 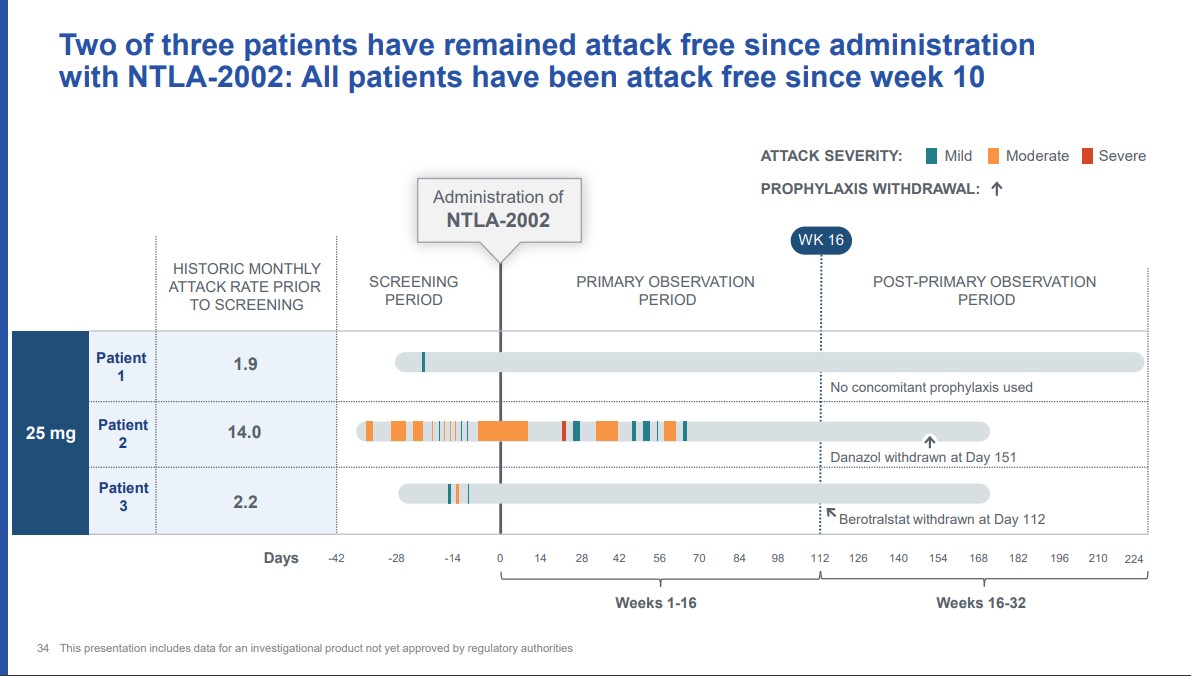 Perhaps there is a slight red flag in the lack of a dose-response; the higher dose did precisely as well as the lower in patients with a similar level of heart failure. In fairness this is a tiny study; a greater divergence in the figures might have been seen with more patients.

A more positive way of looking at that aspect of the data is that selecting a ’2001 dose for the next portion of the study is a no-brainer. When that has completed the asset will enter a worldwide pivotal trial, with Dr Julian Gilmore of UCL in London, the UK’s national coordinator for the phase 1 study, said this will be a phase 3 with hard endpoints including hospitalisations and mortality. But the precise timing and design, including patient numbers, “is still being worked on”.

Still, with data from the polyneuropathy patients in this same trial showing near-identical levels of knockdown, the conclusion that the Crispr approach seems to work in transthyretin amyloidosis is hard to avoid.

And it works fairly safely; one patient in the high-dose group had elevated liver enzymes; he was asymptomatic and the liver enzymes returned to normal levels without any medical treatment – this is of course not the dose that is being taken forward. Otherwise the only observed treatment-related adverse events were two transient infusion reactions, one of which was grade 3. Given that the project is given as a one-off infusion patients might well think this risk is acceptable.

The other groups pursuing transthyretin amyloidosis need not panic yet, however. Many are more advanced than Intellia, which is some way off reporting data on functional endpoints such as the six minute walk test, the measure on which Alnylam reported ambiguous data in cardiomyopathy patients last week.