The first clinical evidence for in vivo gene editing, and a surge in valuation, is to be celebrated. But there is much more to do.

Will it work in more patients, will it work in other diseases, and will the effect last? On Saturday Intellia Therapeutics posted the first real evidence showing that Crispr gene editing can be done inside the human body, and its stock opened 45% higher today as a result.  More cautious investors might want to remember that some questions remain.

Intellia’s results are indeed impressive: a single dose of NTLA-2001 cut the production of misfolded transthyretin sharply. But the data come from just six transthyretin amyloidosis patients, one month after treatment, and no information on the actual effect on patients’ disease has been released. The scientific proof of concept is compelling, but Intellia still has a long way to travel.

In the three patients who received the higher dose of NTLA-2001 malformed transthyretin production was knocked down by between 80 and 96%. The project consists of a lipid nanoparticle containing mRNA encoding the Cas9 enzyme and a separate RNA molecule targeting the human transthyretin gene. 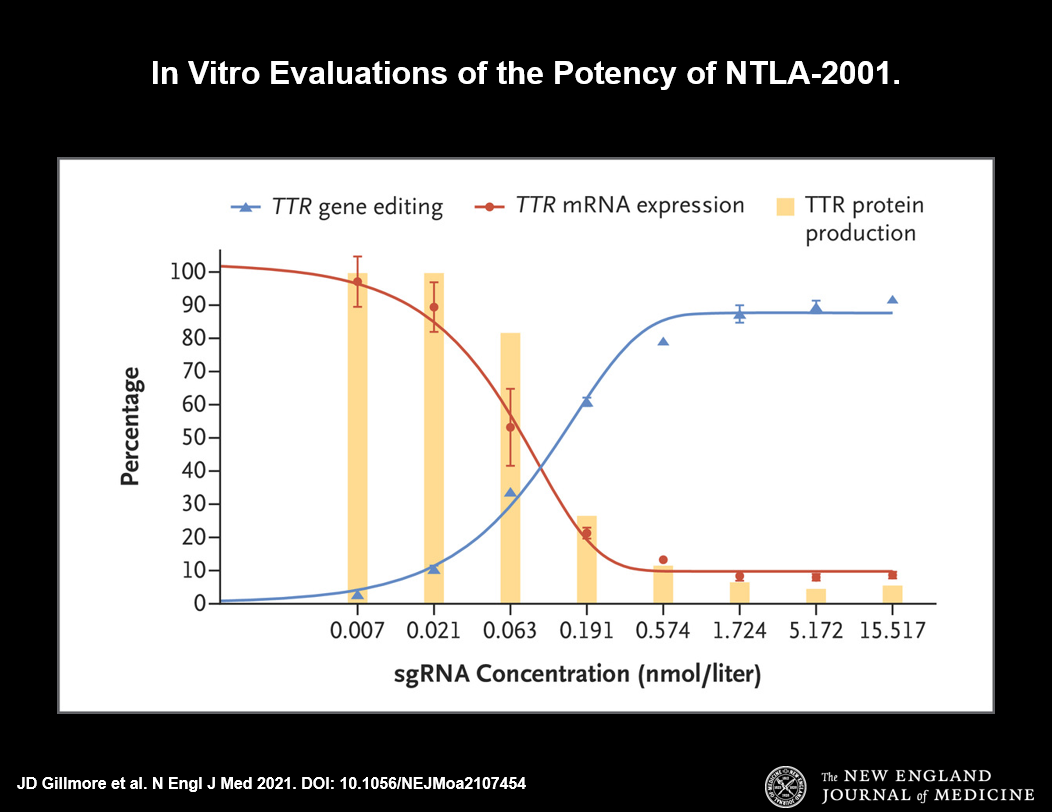 The phase 1 study is ongoing, with the next cohort to be dosed at 1mg/kg. The target here is to reduce misfolded transthyretin by at least 90%. The trial will follow patients for up to two years, which should give an idea of any off-target effects and durability – Crispr editing is designed to be permanent, but then so is gene therapy.

A packet of Crisprs

No information on patients’ disease progression or quality of life changes is yet available. But, for now, that does not really matter: it is the proof that Crispr can work that has electrified the market. Other Crispr players have seen marked share price rises as investors consider the technology at least partly derisked.

The challenge for these other players is not so much successfully editing genes so much as managing to get their agents to the right location. Transthyretin amyloidosis is relatively easy in this regard – the protein is made in the liver, so this is where NTLA-2001 was delivered and made its effects felt. Intellia’s next project is aimed at knocking down the gene for prekallikrein B1 as a therapy for hereditary angioedema; this protein is also produced in the liver.

More diffuse diseases or hard to reach organs, such as cystic fibrosis or heart disease, could be trickier prospects. There is also the fact that knocking down a gene, as Intellia has done, is thought to be easier than repairing a faulty one.

If Intellia’s success has implications for the other Crispr companies, it has different ramifications for non-Crispr groups. Companies developing RNA interference for oligonucleotide projects aimed at liver disease now have a new competitive threat.

Alnylam is one such example. It sells an IV RNAi therapeutic, Onpattro, for the polyneuropathy subtype of transthyretin amyloidosis, and has filed a similar subcutaneous product, vutrisiran. The company opened off 6% today.

There is much work ahead for Intellia, its partner Regeneron and its competitors before the commercial future of in vivo Crispr therapies becomes clear. For a start, regulators need to be persuaded to allow more projects to move into the clinic; Precision and Beam will be the next to ask the FDA permission to begin trials, and green lights would provide another boost to this field.

But with clear signs of efficacy and no safety concerns, Intellia's first-glimpse clinical data was probably the best start the field could have hoped for.