Lilly moves to stack the deck for donanemab

Attempts to improve the Alzheimer’s disease project’s chance of success are understandable, but the market has moved on for now.

Lilly’s Alzheimer’s disease boost proved short lived: full data from Trailblazer-Alz this weekend erased the same amount of market cap as the topline win had added back in January, a cool $18bn. A 1.5-hour call with investors yesterday made little difference to the market’s reaction to the data, which can be summed up as “wait and see”.

Results from Trailblazer-Alz2 are now keenly awaited, and Lilly has moved to improve donanemab’s chances in that pivotal trial by tinkering with its design. But the mixed phase II result means that a positive outcome is far from guaranteed, and Lilly’s use of a novel primary endpoint and focus on patients’ levels of Tau, a difficult biomarker to track, could further complicate the picture.

Complexity is one of the biggest criticisms levelled at Biogen’s rival Alzheimer’s project aducanumab, so Lilly’s efforts to make the donanemab dataset as straightforward as possible are understandable. This is one motivation for the primary endpoint switch for Trailblazer-Alz2; echoing Trailblazer-Alz, this becomes iARDS for the primary and CDR-SB for the key secondary.

CDR-SB, which was previously Trailblazer-Alz2's primary outcome, has not been a “reliable” endpoint in previous Alzheimer’s studies, Lilly execs claimed, pointing out that even identically designed sister trials had generated different results. For example, in the failed Expedition 1 and 2 studies of solanezumab, the company’s older beta-amyloid antibody, iARDS scores tracked similarly while CDR-SB generated different outcomes, Lilly said. 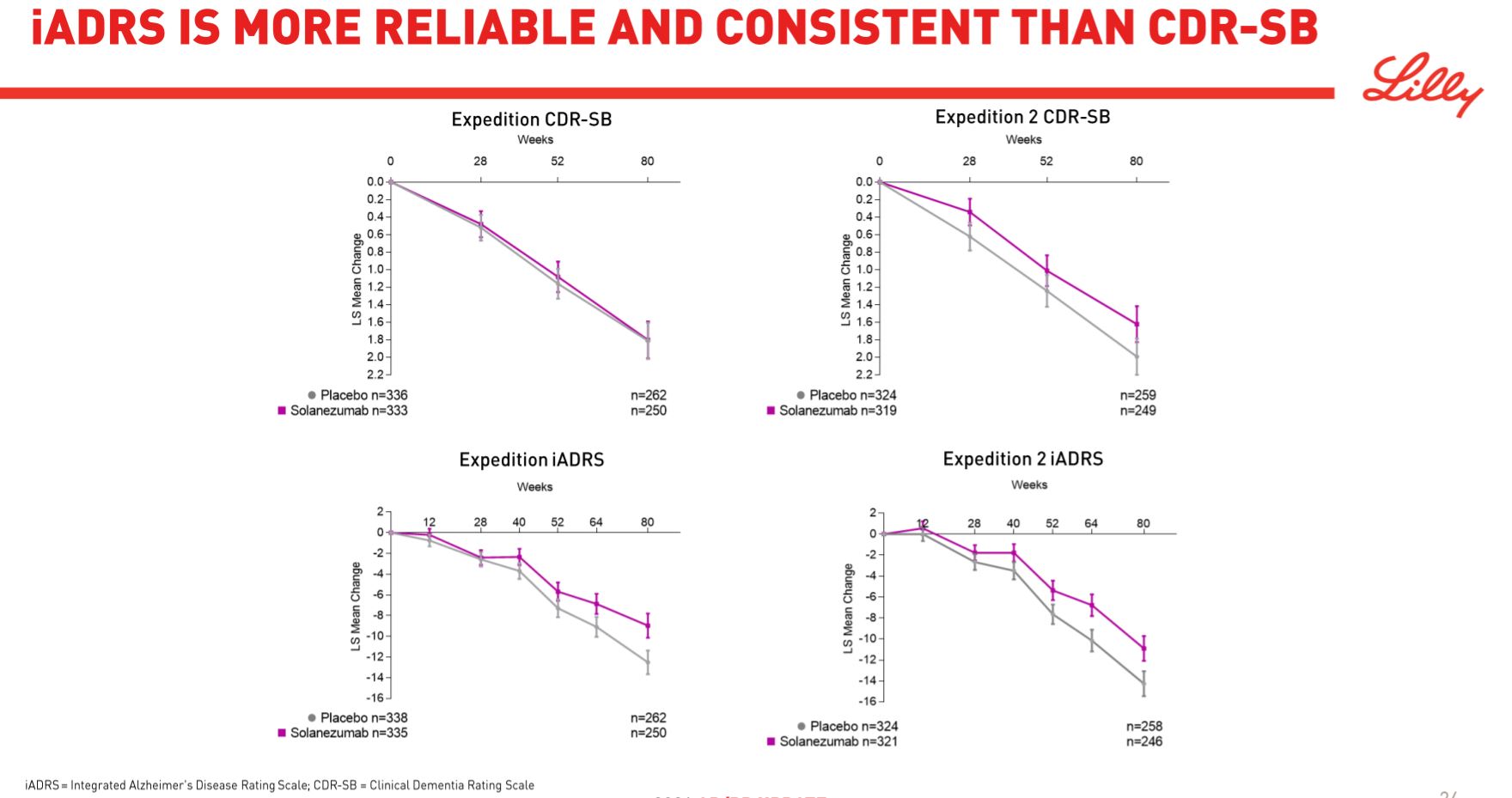 Of course the big issue here is what the FDA thinks of the Lilly-originated iARDS disease score, and on this executives were vague. They avoided a direct question about whether the agency had signed off on the use of this primary endpoint, although Dan Skovronsky, the company’s chief scientific officer, said regulatory discussions had been held before the trial design changes.

In reality, however, if Trailblazer-Alz2 also hits its primary endpoint, and all other readings remain equal, the agency will have a very hard time justifying any hesitancy to approve donanemab, even if it does have misgivings about iARDS. True, the totality of the data will also matter, but this is why enrolment into Trailblazer-Alz2 is also going up, from 500 to 1,500 subjects.

This should help Lilly extract stronger signals from secondary endpoints. In phase II these datapoints might have improved numerically, but the clinical relevance of donanemab’s effects remains in doubt (AD/PD 2021 – Donanemab has much still to prove, March 13, 2021).

Trailblazer-Alz was unique in that it used patients’ Tau levels to guide enrolment. High Tau is associated with rapid disease progression, so these patients were excluded, a design that Lilly believes helped the study succeed.

The primary endpoint in Alz2 will be conducted on a similar cohort of patients, although those with high levels are being enrolled into the trial but stratified for separate analyses. A slide presented yesterday seems to support this biomarker-driven strategy: of the phase II subjects, the hit on iARDS seems clearly driven by those in the lower Tau tercile.

Whether it is advisable to recruit into phase III patients who showed no apparent benefit in phase II is an important question. But focusing on Tau so precisely has longer-term implications.

Such selection criteria are fine for clinical trials, but measuring a patient’s precise Tau load is complex. The development of blood-based Tau assays would be “transformative”, but these are some way off, Mr Skovronsky admitted yesterday. Lilly’s line is that all patients will progress through what seems to be donanemab’s efficacy window at some point.

But it could also be argued that donanemab’s commercial success relies just as much on progress with Tau diagnostics. If a borderline benefit emerges, payers could to seek reasons to limit an expensive therapy only to those in whom it has been shown to work.

That is a question for the future, of course, and everything now depends on donanemab getting to regulators in the first place. For that to happen the efficacy signals in Trailblazer-Alz must be confirmed, with no worsening of safety readings.

In the meantime, the aducanumab decision in June and data later this year with Lilly’s anti-Tau antibody zagotenemab will give Alzheimer’s followers plenty to chew over. But, unless Lilly decides to take an interim look at the phase III data, donanemab’s date with destiny sits sometime in 2023.