A phase III win for the company’s uterine fibroids candidate fails to calm investor concerns about an expensive launch and a rival with deeper pockets.

Beware the perils of cross trial comparison, Myovant warned today, before immediately dismissing its own advice. On a conference call the company made much of a head-to-head comparison of relugolix, its uterine fibroids candidate, and Abbvie’s close rival, Orlissa – no prizes for guessing which asset came out on top.

The 26% plunge in Myovant’s share price suggests that investors do not buy the company’s characterisation of the data, though there is more at work here than statistical interpretation. Relugolix looks approvable which means the biotech will probably need to raise money to fund an expensive launch, a bald fact that no power point slide can hide. 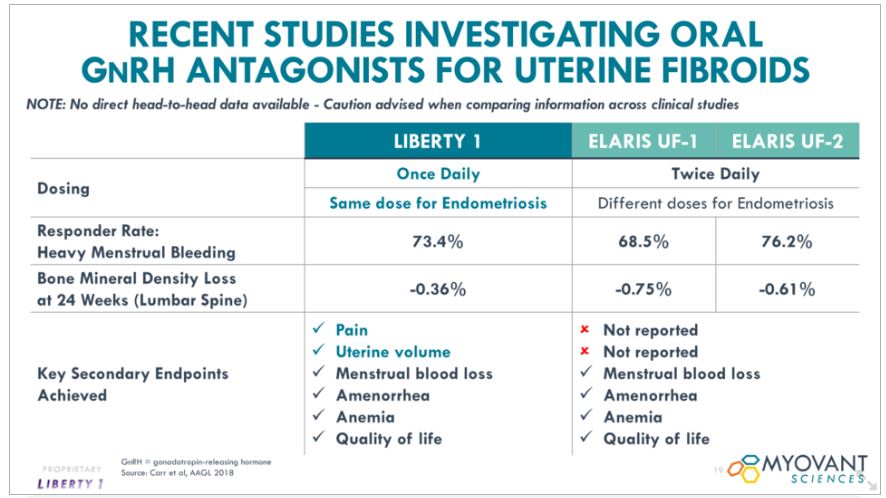 Numerically this looks bang in line with the results from Orilissa’s pivotal programme, which used a similar primary endpoint. The outcome starts to look weaker when the data are placebo adjusted, however, which gives a fairer comparison.

This partly explains the share price fall today – if and when Myovant goes up against deep-pocketed Abbvie in the market, it will need the strongest data possible. Results from Liberty 2 are due in the third quarter and all eyes will be on that placebo-adjusted primary response rate, to see if it substantially budges one way or another.

Both agents are GnRH antagonists, which work by blocking the gonadotrophin hormone that drives the growth of uterine fibroids. Benign tumours that grow in the lining of the uterus, fibroids can cause pain, excessive bleeding and anaemia, and the only really effective treatment currently is hysterectomy.

Myovant can at least point to important benefits with relugolix elsewhere. An 84.3% reduction in menstrual blood loss will be clinically relevant to patients, while the absence of a marked impact on bone loss is also important. Loss of bone density is a major safety concern with this class.

The company highlighted six successful secondary endpoint wins, though one, on the percentage change in uterine fibroid volume, failed to hit statistical significance. But without a full pivotal dataset from relugolix, it is too soon to be able to judge how the agent really stacks up against Orilissa. At this stage, it does not look like there is too much to separate them.

Outside of the data, the Myovant asset does have the advantage of being once daily versus twice a day for the Abbvie drug, but the convenience argument only stretches so far in a debilitating condition like fibroids. On the other hand, Abbvie is expected to file for elagolix for approval in this setting in the coming weeks, putting it several months ahead of Myovant.

At the end of the day, Abbvie’s substantially deeper pockets could well prove to be the most important differentiator here. Particularly in the eyes of Myovant investors, who will no doubt be asked to dip into their own wallets in the not too distant future.

Obseva shows why red flags are worth heeding

Myovant socks it to Orilissa

Relugolix gets a Hero’s welcome in prostate cancer