No knockout blow from Rubius

Rubius shows the first hints of clinical anticancer activity, and is suddenly worth $2.4bn.

Rubius has developed a reputation for having a skewed ratio of valuation to clinical validation, even by current market standards. That reputation has been reinforced by this morning’s presentation of the first clinical data for its anticancer project RTX-240.

The data had been trailed and so were hotly awaited, but in the event they amounted to a 13% remission rate, with one of the two partial responses unconfirmed, no dose-response effect, and an admittedly clean safety profile. This is clearly not a knockout blow, but in a volatile trading period the heavily shorted company opened up 80% today, and now sports a $2.4bn market cap.

Clearly much of the increase will have been down to a short squeeze as a premarket share price uptick triggered a buying frenzy to cover short positions. As far as Rubius’s fundamental technology goes, however, after nearly three years on Nasdaq the red blood cell company has yet to show definitively that its approach has legs.

RTX-240 comprises red blood cells engineered to express 4-1BBL and IL-15TP, a fusion of IL-15 and IL-15 receptor alpha; its aim is to activate 4-1BB, a T-cell co-stimulatory protein, and IL-15, a cytokine that induces NK cell proliferation.

This morning’s clinical data come from a dose-escalation study whose results are separately the subject of a poster at next month’s AACR meeting. At a February 28 cut-off they comprise 15 efficacy-evaluable subjects across a range of relapsed solid tumours.

However, this is hardly an extraordinary response rate, and though the company said it saw “aspects of dose response” in adverse events, there was none as regards efficacy. 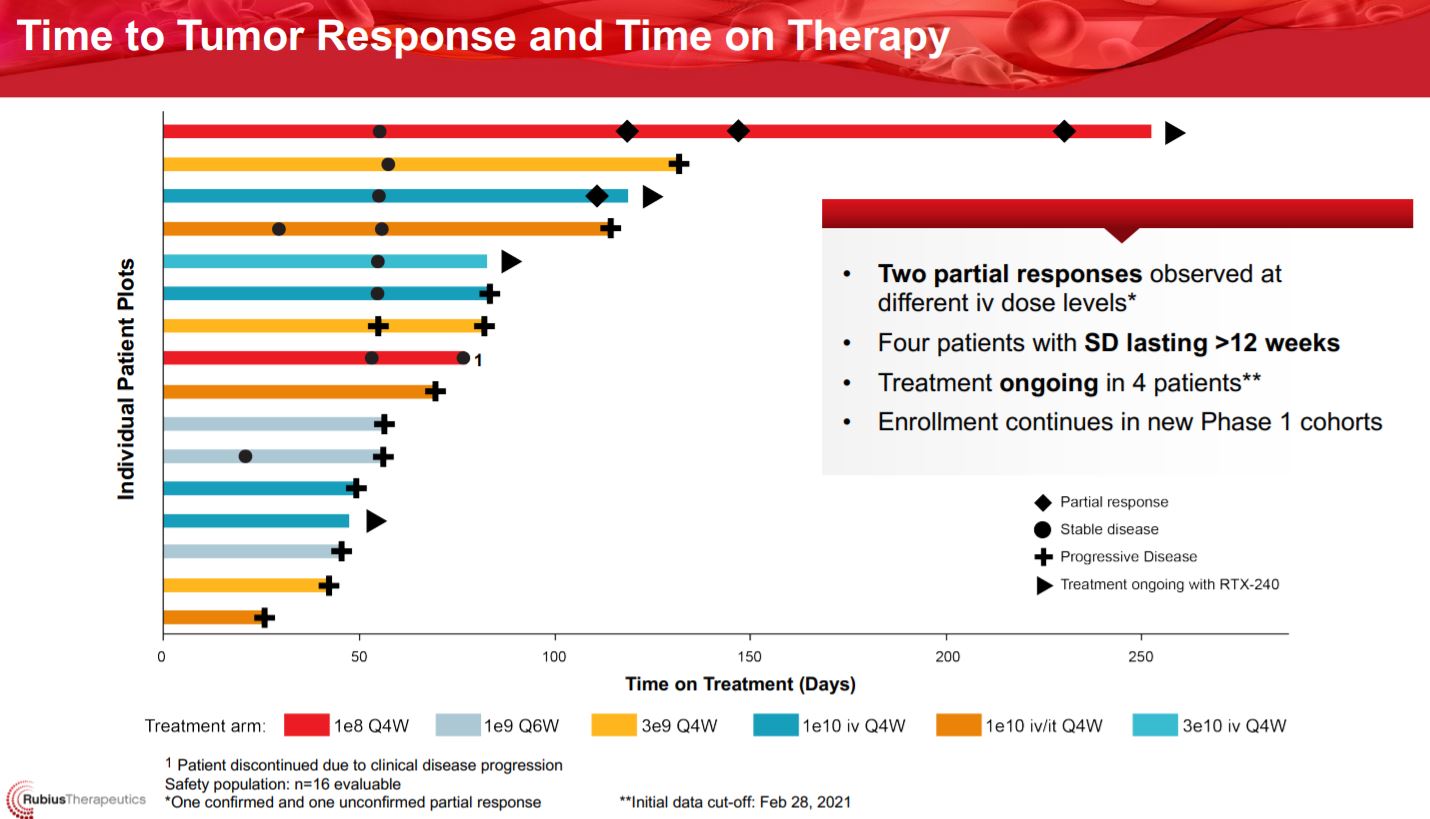 Rubius said T and NK cells were activated, but it could not say whether the responder(s) saw relevant cell trafficking. T and NK cells were trafficked into the tumour microenvironment in three of five subjects in whom these data were available, but none of these responded.

Where does this leave Rubius’s investment case? The group had famously floated in mid-2018 at a $1.8bn valuation, despite having not a single clinical asset. It then took 18 months to dose the first patient with its first project, RTX-134 for phenylketonuria, before that study blew up and the asset was discontinued (Rubius confirms the worst, March 13, 2020).

While that setback triggered a share price slump the stock has mounted a strong recovery, and was up over 30% in today’s premarket in anticipation of the RTX-240 data. Initial release of the data prompted a 10% fall, but the stock then ticked up to opened 80% stronger after Rubius held an analyst call to discuss the readout.

Rubius noted that separate attempts to agonise 4-1BB and IL-15, using MAbs or proteins, have suggested efficacy but been limited by severe toxicities, and at least its data suggest progress over this. Future clinical plans involve testing RTX-240 in patients bearing a specific NK cell signature suggestive of response.

But this is all investors have to go on for now: the AACR presentation will contain no new cuts of the clinical data, Rubius told analysts.