No land grab for Gemini in geographic atrophy

Pivotal development of GEM103 is set to proceed, but the phase 2 result is a cautionary tale – not only for Gemini.

Gemini Therapeutics’ inability to slow progression of geographic atrophy with its recombinant factor H, GEM103, is especially worrying given that biomarkers showed the project doing precisely what it was meant to. Little wonder that, despite the group trumpeting the study as successful, its stock opened off 30% this morning.

The data will be of relevance to numerous other companies also seeking to treat geographic atrophy (GA) by hitting the complement cascade. The most relevant read-across seems to be to Apellis and NGM Biopharmaceuticals, the former of which will soon report phase 3 data with intravitreal pegcetacoplan.

Both approaches, of which pegcetacoplan is the more advanced, act to inhibit complement C3, a key regulator of the complement cascade that leads to target cell lysis. This is important because factor H also acts on C3, specifically by binding to its cleavage product C3b, a positive feedback stimulator, and thus inhibiting the alternative complement pathway.

However, based on data toplined after market close yesterday from Gemini’s phase 2 Regatta study, this approach remains very much unproven.

Gemini said the uncontrolled trial had shown GEM103 injected into one eye of GA patients to elicit an indistinguishable effect on disease progression versus the other, non-injected eye at three and six months, though it claimed that visual acuity remained stable throughout the trial. 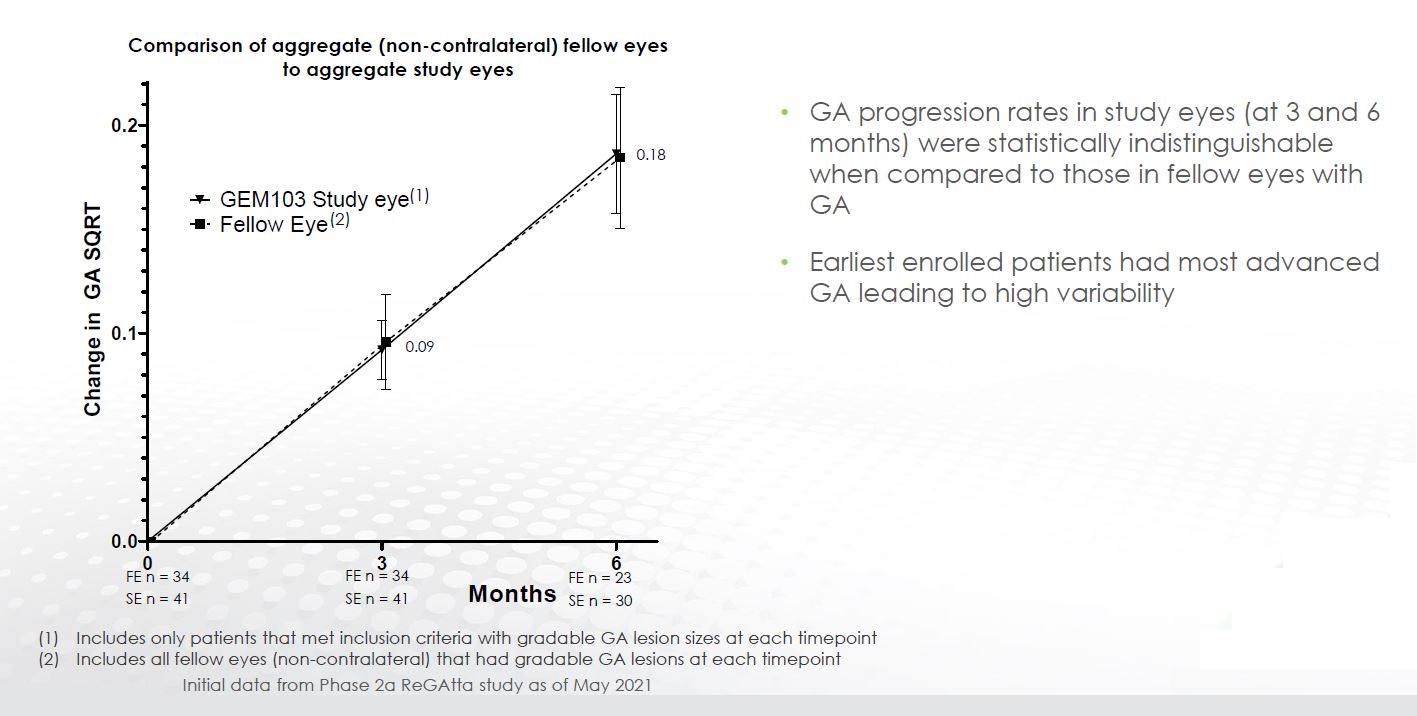 It can be argued that the time allowed was simply too short to see an effect, and one key aim of Regatta, safety, was demonstrated. There was no increased risk of choroidal neovascularisations, which are new, damaging blood vessels, something investors were looking out for.

But the trial did show GEM103 to be working pharmacologically: both doses, 250µg and 500µg, raised factor H levels, which continued to climb dose-dependently, Gemini said. Biomarkers also indicated GEM103’s ability to reduce levels of the factor C3 cleavage product.

This is not the first setback to hitting GA via the complement pathway, which is known to play an important though imprecisely defined role in this disease. Roche’s lampalizumab, an antibody fragment against factor D, another alternative pathway activator, was discontinued after failing in phase 3 in 2017.

Either way, Gemini, a biotech that only listed in February by reversing into a Spac, says it will now steam ahead into a potentially pivotal phase 2/3 study of GEM103.

Depending on regulatory discussions, this is to have a GA disease-specific primary endpoint, and to begin in the second half. While many investors now assume that this has a greater chance of failing than they did before yesterday’s mid-stage readout, the industry pipeline in GA is surprisingly full beyond Gemini.

The next big test will be Apellis’s pegcetacoplan, the systemic form of which last month secured US approval as Empaveli for paroxysmal nocturnal haemoglobinuria. Pivotal trials of intravitreal pegcetacoplan should read out in the next quarter, and given the lack of competition in GA these represent an important catalyst for Apellis.

However, the company must succeed where Gemini and Roche have so far failed.

Apellis finds that one of its twins is evil

Novartis eyes up another gene therapy