Rhythm hits its obesity endpoints after excluding some patients

Setmelanotide looks approvable, but patients were stratified for inclusion in some measures.

Initial pivotal data on Rhythm Pharmaceuticals' melanocortin 4 agonist setmelanotide in two rare genetic obesity indications look pretty positive, and the company plans approval applications by the end of next year's first quarter. Rhythm’s shares have popped 20% so far today as investors digest the likelihood of approvals here and of further success in ongoing trials in other similar disorders.

But questions remain about the analytical basis of these trials, and whether the proportion of responding patients is high enough to lead to decent commercial traction.

Setmelanotide activates the melanocortin 4 receptor, part of a pathway that regulates energy expenditure and appetite. Variants in genes in this pathway are associated with unrelenting hunger and severe, early-onset obesity.

Both phase III trials administered a therapeutic dose of setmelanotide open label for 12 weeks. This was followed by an eight-week blinded placebo phase in the same patients, intended to illustrate the effect of the drug – neither trial had a dedicated control arm. After the withdrawal phase subjects received 32 weeks of therapeutic dose, bringing them to the one-year time point.

In the first trial eight of 10 patients with pro-opiomelanocortin (POMC) deficiency obesity hit the primary endpoint, losing at least 10% of their weight over a year, after adjusting for historical controls.

Secondary endpoints were also hit. These included reduction in body weight, reduction from baseline in most hunger rating – this is based on a 0-10 answer to the question, “In the last 24 hours, how hungry did you feel when you were the most hungry?” – and the proportion of patients seeing an improvement in self-reported hunger scores of at least 25%. The data and statistical analyses are shown below. 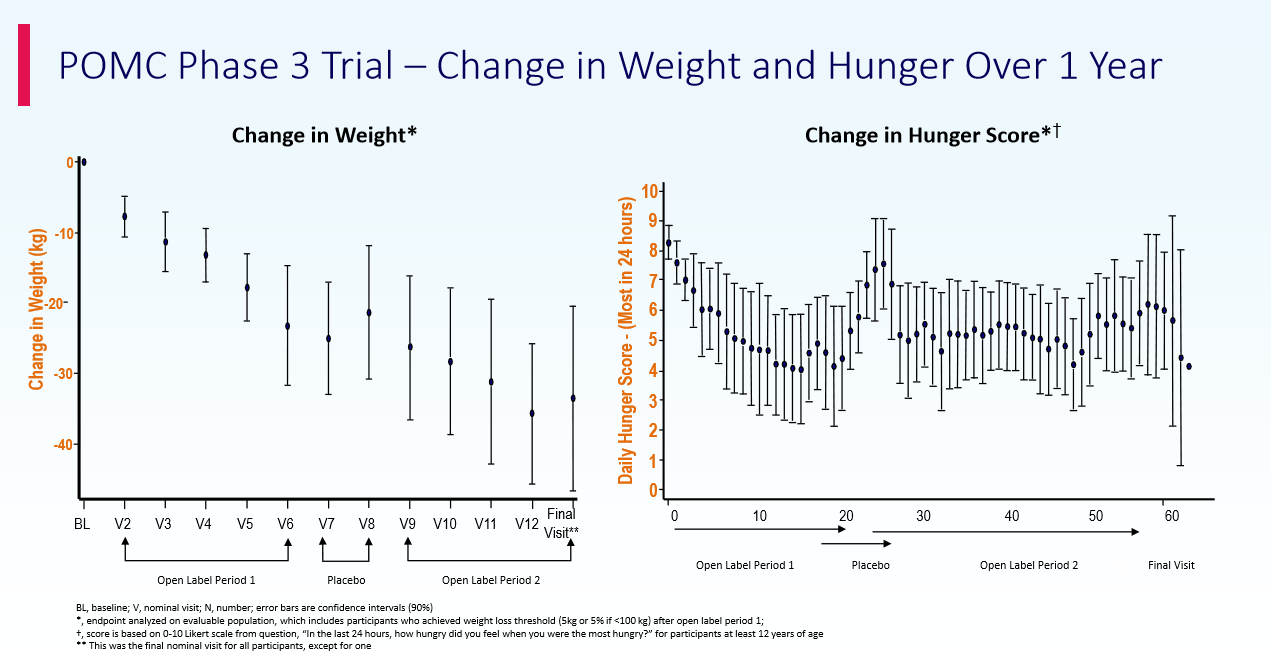 In the other study, in subjects with leptin receptor (LEPR) deficiency obesity, five of 11 patients met the primary endpoint, which was the same as in the POMC trial. Rhythm said that the same secondary endpoints were hit too, again with a high degree of statistical significance. 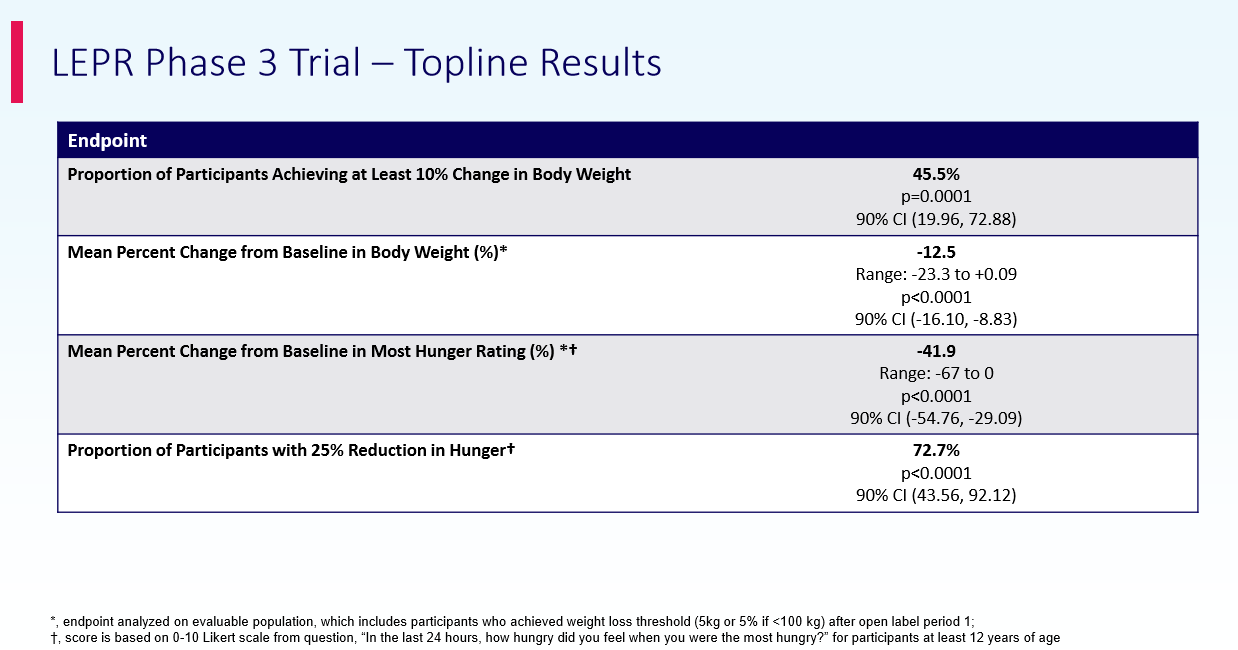 All very impressive, and probably good enough for approval – even though less than half the LEPR patients hit the primary. During the placebo washout period patients in both trials gained weight – around 5kg on average in both trials – and became hungrier.

FDA submissions for these rare disorders are to be made at the end of this year or the beginning of next, with a request for priority review. EMA filings will follow shortly afterwards.

Eyebrows have been raised, however, over the small print. As can be seen in the slides above, only the primary endpoint and the final secondary, the proportion of patients who had a 25% drop in hunger, were analysed on the whole trial population.

The other two secondaries, change from baseline in bodyweight and in most hunger rating, had a filter applied. They were analysed based on what Rhythm calls the evaluable population – those participants who achieved a weight loss threshold of 5kg, or 5% if their baseline weight was 100kg, after the first open-label period.

In other words, the final analysis was only conducted in patients in whom setmelanotide had already been shown to work. Nine POMC and seven LEPR patients made the cut.

These statistical gymnastics were only conducted on a couple of secondary measures, not the main endpoint, so maybe the regulators will not object.

In that case, a more pressing issue for Rhythm will be just how big the market might be. The group is attempting to broaden the drug’s reach, and is also conducting a phase III trial of setmelanotide in Alström and Bardet-Biedl syndromes, slated to report in a year or so, and earlier trials are under way in Smith-Magenis syndrome and other genetic defects in the leptin-melanocortin pathway.

But the sellside’s forecasts for the project are hovering at less than $450m in 2024, according to consensus compiled by EvaluatePharma. Perhaps these data will give them a boost, though doctors and payers might well raise the issue of how great the overall weight loss might be when all patients are considered.

Albireo sets the standard for Mirum to hit