Genkyotex has dredged the data to find a glimmer of hope with GKT831 in primary biliary cholangitis, but cash is running short.

Genkyotex wants to become a liver disease player, and it won’t let a detail like a trial failure put a brake on its ambitions. The company’s GKT831 has flunked a mid-stage study in its lead indication, primary biliary cholangitis, but Genkyotex claims to have seen enough to push on into phase III.

One big question – other than whether GKT831 actually works – is how the group will find the cash to do so. At the last count Genkyotex had €7.3m ($8m) in the bank, which should last around a year at current burn rates, but would not be enough to fund a pivotal trial.

During a conference call today the company’s chief executive, Elias Papatheodorou, said various options were on the table, including partnering GKT831 or carrying out an equity raise. However, the latter looks out of the question anytime soon – the company’s shares were down as much as 16% today despite its best efforts to claim a win in the phase II trial.

The 111-patient study tested two doses of GKT831, 400mg once daily and 400mg twice daily, versus placebo. It did not meet its primary endpoint, percentage change in serum gamma-glutamyl transferase (GGT) at 24 weeks.

Genkyotex had been hoping to see a 25-30% reduction in GGT, a biomarker of liver damage.

Theresults will be a blow after Genkyotex reported positive data from an interim analysis of 92 patients from the same trial last November. At six weeks subjects in the twice-daily group had a 23% decrease in GGT (Genkyotex gets boost, but questions remain, 5 November 2018).

On today’s call Genkyotex’s chief medical officer, Philippe Wiesel, maintained that the reduction in this high-dose group had remained stable, at around 20%. He blamed a better response in the placebo group at the 24-week timepoint for the fact that the trial had not hit the primary endpoint, saying that the group had merely been “a bit unlucky” here. 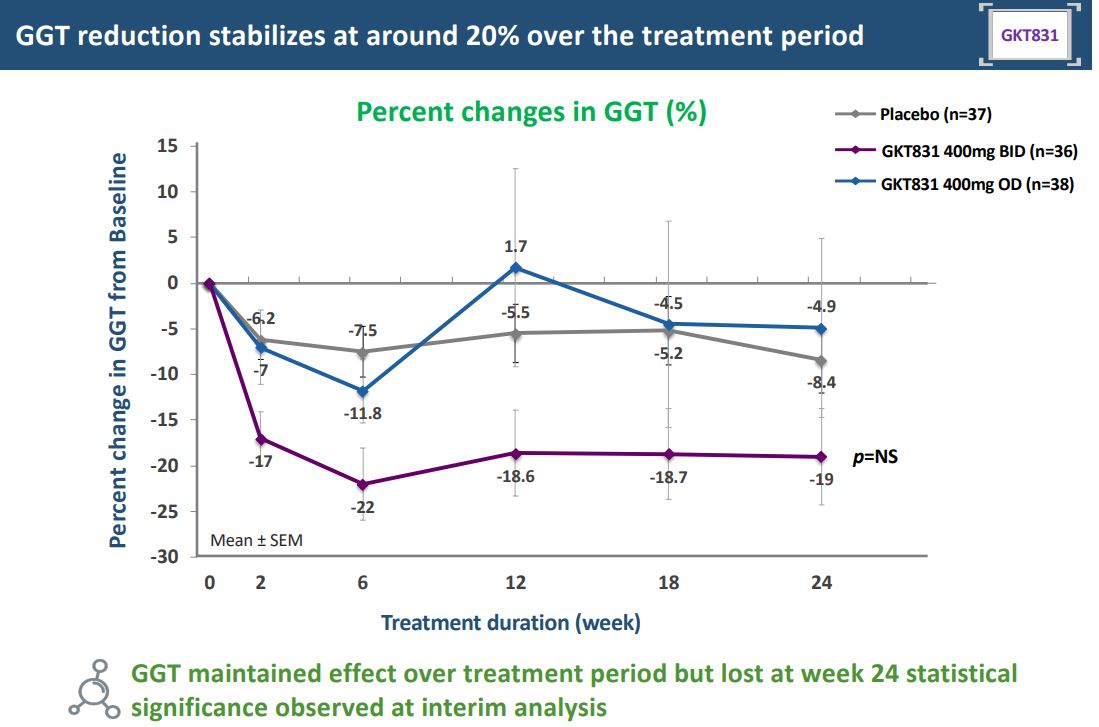 On the basis of the upbeat presentation investors would be forgiven for thinking that the trial had been an unqualified success. However, the “positive” findings highlighted by the company are tenuous at best.

The group chose to begin this morning’s press release with a 22% reduction in liver stiffness seen with the twice-daily dose of GKT831, versus a 4% increase with placebo. Liver stiffness, which was measured using noninvasive transient elastography, is an indicator of fibrosis. This was a prespecfied endpoint, but it featured low down in a list of 27 secondary outcomes.

In any case, the threshold for significance had been set at p=0.023, and as the primary endpoint was not hit any findings here can only be considered exploratory.

A bigger red flag is the fact that the data touted by Genkyotex came from a subgroup of 45 patients who had baseline liver stiffness levels of 9.6kPa or greater, indicating stage 3 fibrosis or higher. According to the company this was a predefined population.

Across the entire trial cohort, the liver stiffness data were much less impressive.

Mr Papatheodorou told Vantage that this marker of fibrosis had always been an important endpoint in the trial. When asked why the company had not made this the primary outcome, Mr Wiesel replied that finding a benefit here had been seen as riskier, and GGT as a safer bet.

Mr Papatheodorou added that the reason the company had not included liver stiffness data in its six-week announcement was because this had been measured for the first time at 24 weeks. 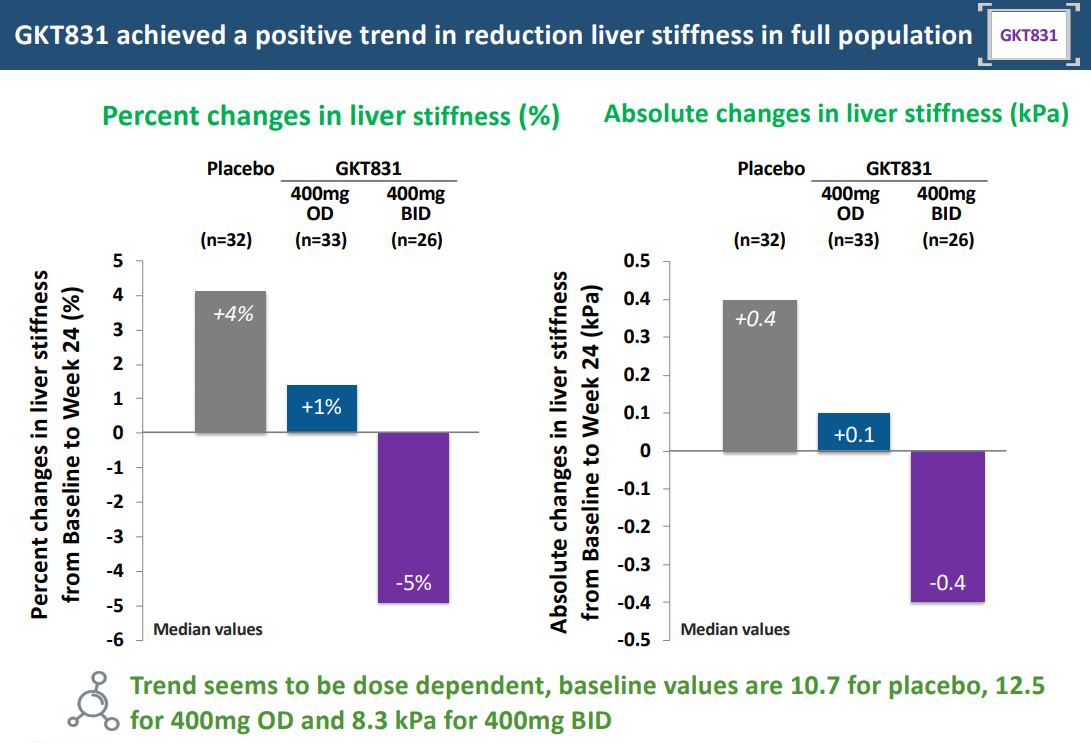 Another important secondary endpoint of the study was reduction in alkaline phosphatase (ALP), a marker of liver disease and the outcome used as the basis of approval for Intercept’s Ocaliva, the only drug marketed for PBC so far.

Genkyotex claimed to show an impressive reduction in ALP with GKT831, with a nominal p value of 0.002. However, this analysis took into account the entire treatment period, and in fact the results were distinctly weaker using only data from the 24-week timepoint. Mr Wiesel told Vantage that the company had again been unlucky with the “snapshot” at week 24.

Genkyotex now hopes to take GKT831 into late-stage trials in PBC, as well as other liver diseases including Nash and primary sclerosing cholangitis.

Mr Wiesel and Mr Papatheodorou would not give Vantage any details of the company’s phase III plans in PBC, for example whether it would switch to a fibrosis endpoint as the primary outcome measure, or whether it would focus on patients with more advanced fibrosis.

First, Genkyotex needs to raise money, and the phase II data will make this a tough task.