As a phase III blow-up brings Sage Therapeutics’ run of success to an end, the company’s post-hoc analyses fail to reassure investors that its depression project has a future.

Sage Therapeutics was well armed with reasons to explain the failure of SAGE-217 in the Mountain study, but investors were not buying them. Shares in the highly valued company plunged 55% at the open, erasing a cool $4bn in market cap.

The poor track record of psychiatric projects meant that this study, in major depressive disorder, was always high risk, but Sage’s previous successes had tempted investors to start believing in a secret sauce. In the end the company could not even blame a stronger-than-expected placebo response, which makes the findings even more concerning for the future of SAGE-217.

That Mountain is a failed trial is incontrovertible, despite claims to the contrary by Sage’s chief executive, Jeff Jonas, on a conference call this morning. The primary endpoint – reduction on a depression scale called HAM-D at day 15 compared to placebo – was missed at both doses tested. Patients treated with SAGE-217 responded remarkably similarly to those given a placebo pill.

The placebo response in Mountain was not dissimilar to that seen in an earlier phase II study. It was the SAGE-217 group that deviated from previous experience, prompting the company to indulge in some data digging to explain the apparent misfiring of its lead asset.

First non-compliant patients were blamed. In the SAGE-217 30mg group 14 patients, or 9% of subjects, had no measurable drug concentration, and excluding them from the primary analysis set resulted in a statistically significant readout at all time points, Sage said. The second explanation involved a greater proportion of more mildly depressed patients, in Mountain than in previous studies. Excluding these also helped the data set achieve statistical significance. 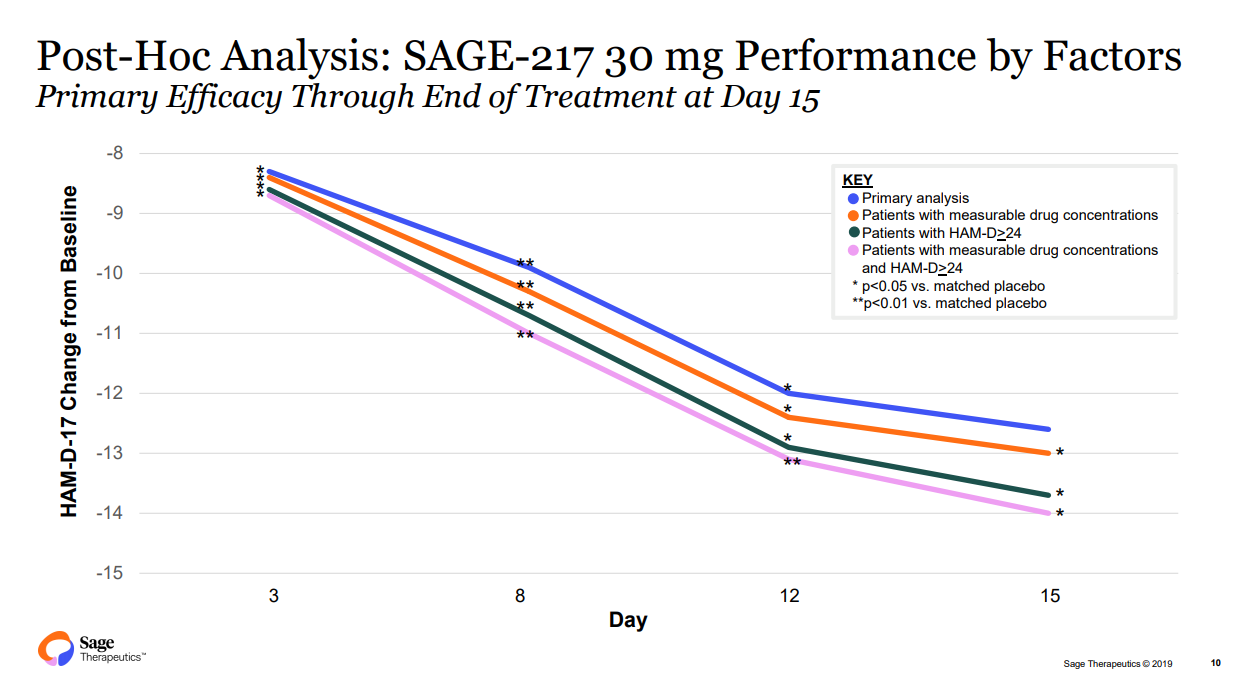 However the failure of the primary endpoint makes these post-hoc findings little more than exploratory. On a conference call executives would not commit to running a confirmatory study in a more severe population, though they admitted this could be done fairly quickly. This hardly builds confidence in the company's explanations for the derailing of this trial.

Sage's stance for now seems to be that this data, along with a positive read-out in post-partum depression, should be enough to support a filing. SAGE-217 has breakthrough status, so the company should be able to have those conversations with the FDA relatively quickly.

“This is not a failed study,” Mr Jonas insisted on a call. “It is pretty clear the data are in the right direction and clearly supportive.”

True, depression drugs have been approved with negative studies before. But with pivotal data from two further studies due next year, the FDA has good reason to wait and see if SAGE-217 can prove its activity without needing a post-hoc data scrub.

Before today’s news consensus among the sellside was for a launch in 2021, and sales surging to $1.8bn by 2024. Both of those estimates now looking a lot less secure.