Theravance had hoped that its gut-selective Jak inhibitor izencitinib would avoid the toxicity issues seen with systemic Jaks. Yesterday, the company reported a clean safety profile in the project’s phase 2b Rhea trial in ulcerative colitis – but unfortunately there were no signs of efficacy either.

Izencitinib is partnered with Johnson & Johnson, which can opt to remain in the collaboration based on data from Rhea and the Dione study in Crohn’s, due to read out in late 2021 or early 2022. This outcome now seems unlikely and, without a cash injection from J&J, Theravance’s future looks precarious.

The group might have a get-out-of jail card in the form of a separate project, ampreloxetine, which is due to yield data this quarter from the phase 3 Sequoia study in neurogenic orthostatic hypotension.

Still, Evercore analysts only give ampreloxetine a 30% chance of success, saying that phase 1/2 data are hard to interpret given a small sample size and high dropout rate.

Here, izencitinib might provide a cautionary tale. The project’s phase 1b study in ulcerative colitis enrolled just 40 patients and, although it included a placebo arm, was not powered for efficacy analyses.

This raises the question of why Theravance chose to go into late-stage trials on the back of such flimsy evidence. Now the group is being punished for this mistake, with its stock down 31% this morning on the news of the Rhea trial’s failure, released after hours.

The study tested 20mg, 80mg and 200mg doses of izencitinib, with none showing a benefit versus placebo on the primary endpoint, change in total Mayo score at week eight. 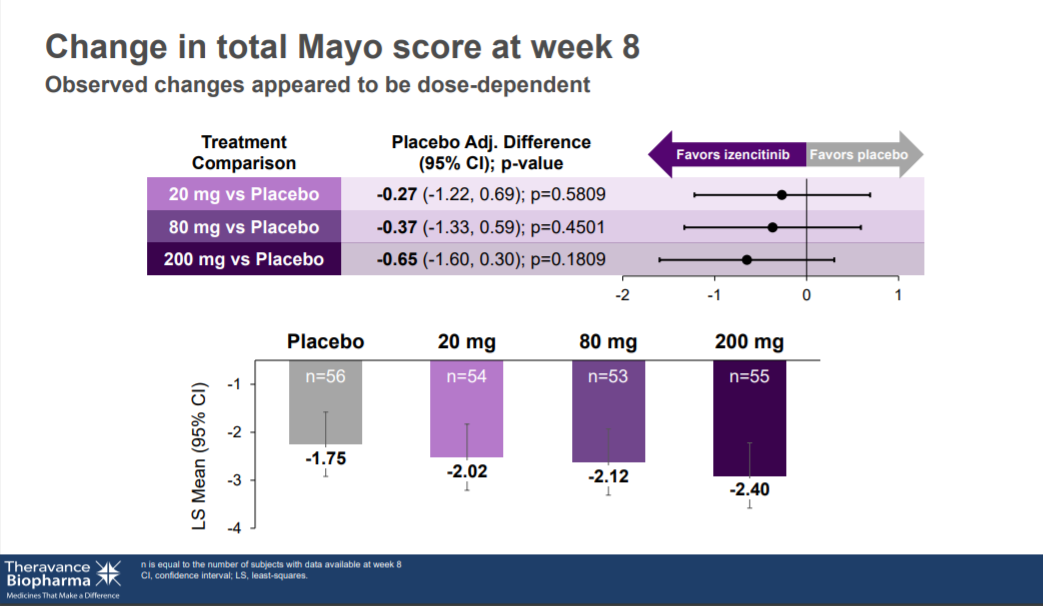 Results on secondary endpoints were also unimpressive, with higher doses of izencitinib doing numerically worse than placebo on the key secondary, clinical remission at week eight.

Theravance is now cutting costs associated with izencitinib, suggesting that it does not hold out much hope of J&J’s continuing involvement and meaning that the smaller group looks set to miss out on payments of up to $900m linked with the deal.

Theravance is unlikely to move forward with izencitinib alone, Leerink noted. The analysts added that the group had enough cash to last into 2023, with $265m in the bank at the last count.

Moreover, should ampreloxetine also fail Theravance could be forced by investors into a restructuring, Leerink also reckons, with a focus on its two tangible assets: the group receives royalties from sales of Glaxosmithkline’s Trelegy and a share of profits on Viatris’s Yupelri.

Broader questions for the company now are whether izencitinib just does not work, or whether systemic exposure to Jak inhibitors is needed for a therapeutic effect. If the latter turns out to be the case it would undermine much of Theravance’s pipeline.

The group is pressing on with its lung-selective Jak nezulcitinib, in acute lung injury due to Covid-19 and lung transplant rejection, despite a recent failure in Covid-19. And its inhaled Jak for asthma, TD-8236, also appears still to be in play despite a flop last year in a phase 2 lung allergen challenge study.

OncoMed digs itself out from under Alpine avalanche

Idorsia sets itself up for failure