Promising early data with Sangamo and Pfizer’s haemophilia A gene therapy could set up a battle with Roche and Biomarin.

Sangamo investors have had a rough ride of late, but the company gave its fans something to cheer about today with promising data from its Pfizer-partnered haemophilia A gene therapy candidate SB-525.

In just two subjects treated with the highest dose, factor VIII reached levels within the normal range. The data make SB-525 look competitive against haemophilia A gene therapy projects from Spark, which will soon become part of Roche, and Biomarin. Sangamo and Pfizer will have to treat more patients before this can be confirmed. Investors nevertheless threw caution to the wind, sending Sangamo’s stock up 30% this morning, largely erasing the stock's losses this year.

The company also put out data from one patient treated with ST-400, an autologous cell therapy being developed for beta-thalassaemia in collaboration with Sanofi, that could eventually go up against Bluebird Bio’s Lentiglobin.

But the haemophilia A gene therapy data were the main event. Like other gene therapy candidates for the blood disorder, SB-525 is designed to deliver a copy of the gene coding for factor VIII to a patient’s liver, with the aim of producing the factor that is missing in patients with the inherited disease.

The results in the highest-dose cohort are the most encouraging: these two patients achieved factor VIII levels in the normal range, defined as 50-150% of average. 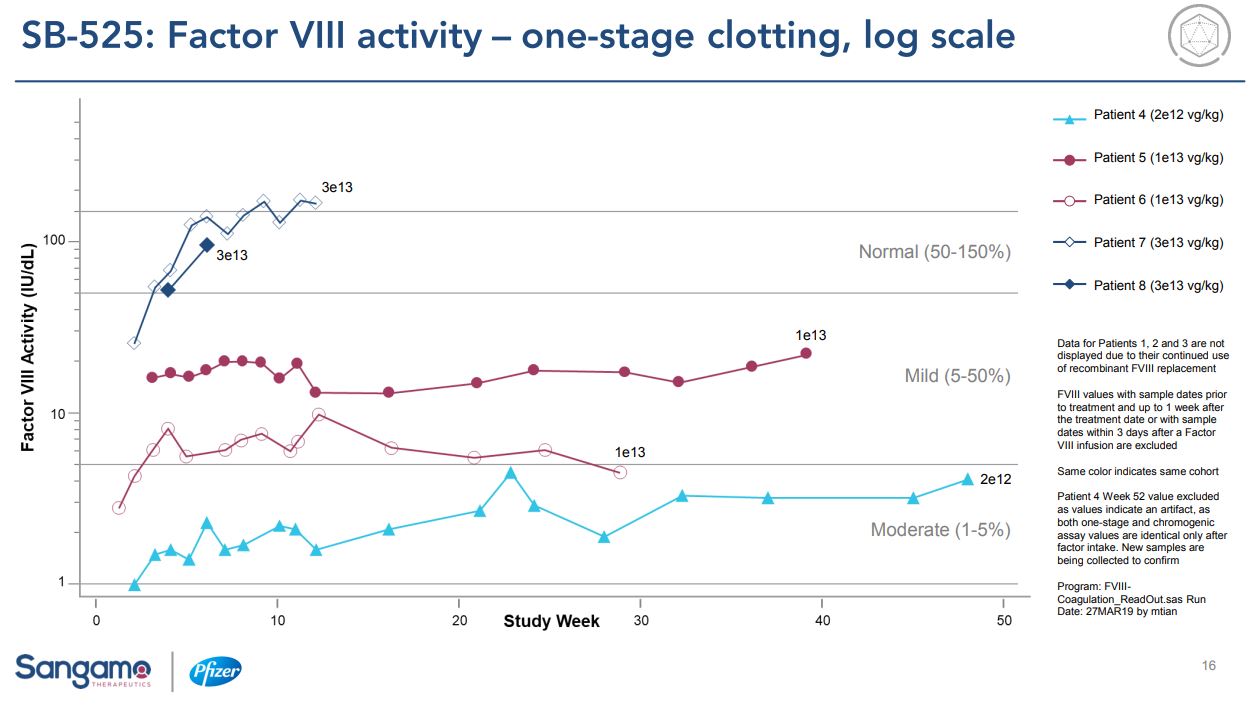 Patients in the highest-dose group have not needed to continue factor VIII replacement, and have had no spontaneous bleeds to date.

Still, it was not all positive. Sangamo’s analysis today did not include three patients, two of whom received the 9x1011vg/kg dose and one the 2x1012vg/kg dose, because they did not express factor above the detectable range.

And one subject in the highest-dose group had a treatment-related serious adverse event of hypotension and fever, which resolved with treatment. The same patient experienced liver enzyme elevations of more than 1.5 times the upper limit of normal, though these resolved with oral steroids. Liver enzyme increases are not unusual with gene therapies, and Sangamo will be encouraged by the fact that the patient did not show a loss of factor VIII activity.

And in better news for Sangamo, patients in the trial did not need prophylactic steroids. This could be an advantage over Spark’s – soon to be Roche’s – SPK-8011, which has had problems with immunogenicity. Investors are eagerly awaiting results from a new cohort in Spark’s phase I/II trial including prophylactic steroid treatment.

SPK-8011 has also not managed to return factor VIII levels to within the normal range – something that Biomarin’s valoctocogene roxaparvovec (valrox) has done, although there are still questions over the durability of the latter. Three-year data with valrox, due mid-2019, could make the picture clearer.

Sangamo investors no doubt hope that on the latest showing SB-525 could be better than SPK-8011 and valrox. However, Sangamo's project still has a long way to go: three to five more patients will be treated with the high dose in Alta, before phase III begins. And longer-term data will be needed to ascertain SB-525's durability, too.

Pfizer is responsible for late-stage development, and Sangamo executives noted during a conference call today that its partner would decide what dose of SB-525 to take into pivotal trials.

Under the deal Sangamo is eligible for $475m in milestones, $300m relating to SB-525, but executives declined to say today how much of this would come on Pfizer moving SB-525 into phase III.

Meanwhile, the data with ST-400 came in one patient in the phase I/II Thales study with transfusion-dependent beta-thalassaemia – specifically, the most severe β0/β0 form. Notably, the patient, who had been receiving packed red blood cell (PRBC) transfusions every other week, has been infusion free for around five weeks.

Bluebird’s Lentiglobin is being tested in β0/β0 beta-thalassaemia, but so far its most convincing results have been in the less severe non-β0/β0 population.

Analysts on today’s conference call were keen to hear how ST-400 might stack up against Lentiglobin. While cautioning that the data were very early, Sangamo’s executive vice-president of R&D, Adrian Woolfson, said the company’s candidate should avoid the random insertions that might turn out to be a problem with Lentiglobin.

ST-400 targets the BCL11a gene to switch the production of foetal haemoglobin back on, which could compensate for patients’ dysfunctional haemoglobin. In this way it looks similar to another project, BCL11a shRNAmiR, which Bluebird is developing in sickle cell disease.

Sangamo investors have no doubt taken heart from Roche’s $4.8bn buyout of Spark, seemingly for its haemophilia A project, and will now be wondering what price Sangamo could achieve. But longer-term data need to be shown, in more patients, before Sangamo can truly be called a gene therapy contender.