Sangamo is slowly building a case for SB-525 over Biomarin’s valrox.

Results from just two haemophilia A patients sent Sangamo’s stock soaring in April, and the company will hope to repeat the trick on Monday. The group’s latest data drop with its Pfizer-partnered gene therapy, SB-525, shows persistent longer-term responses and promising but early results in two further patients receiving the highest dose.

Still, only one of the recently dosed subjects has reached normal levels of factor VIII so far, and there was another case of the liver enzyme elevations previously seen. While Sangamo is confident of managing these adverse events, it still has some way to go to prove that its therapy is effective, durable and safe.

The latest data from the phase I/II Alta trial were presented on Saturday at the International Society on Thrombosis and Haemostasis (ISTH) meeting in Melbourne.

The trial has so far enrolled 10 patients. Four of these received the highest SB-525 dose of 3x1013 vector genomes (vg)/kg, and it is this group that has produced the most promising data.

Sangamo will recruit one more patient into this dose cohort, the company’s chief executive, Sandy Macrae, told Vantage. The company does not plan to evaluate higher doses in the study, he added.

A phase III trial should also begin soon, and will be run by Pfizer. Mr Macrae would not confirm whether this would also use 3x1013vg/kg, but did say that both Pfizer and Sangamo were “very happy” with the results being generated from this cohort.

This optimism looks justified based on the data available so far on levels of factor VIII, the clotting factor that is missing in haemophilia A. In the two patients treated with the highest dose who have been followed for the longest, FVIII levels, which had reached normal levels at the April data cut, stayed within the normal range as determined by chromogenic assay.

The two more recently dosed patients also showed a rapid rise in FVIII levels, although only one has reached the normal range so far; however, this patient has only been followed for four weeks. 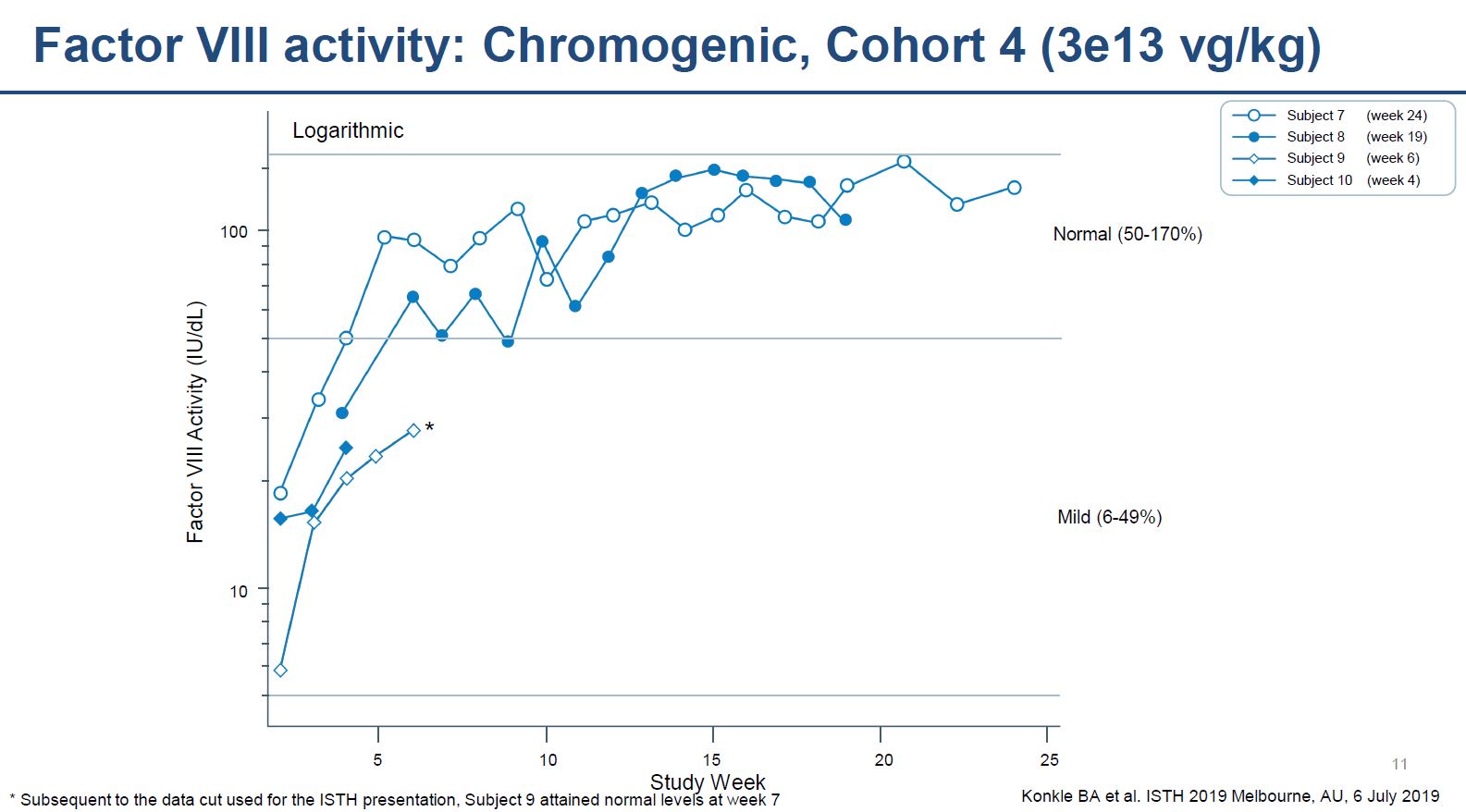 The Sangamo presentation also included data generated with a one-stage assay, but Vantage chose to focus on the data from the chromogenic assay because Mr Macrae described it as the most relevant measure of FVIII activity.

It is also the assay that Biomarin is now using in trials of its haemophilia A gene therapy contender, valoctocogene roxaparvovec (valrox), and is apparently the measure that the US FDA favours.

On the current data SB-525 looks at least as good as valrox, although the usual caveats about cross-trial comparisons apply, and the results should also be treated with caution given the small number of patients treated so far.

In Biomarin’s phase II trial the chromogenic assay found FVIII levels around 60% of normal at 25 weeks in patients treated with the high dose of valrox, 6x1013vg/kg.

There are also questions around the durability of Biomarin’s project. The company reported in May that FVIII levels in patients receiving high-dose valrox had dropped to a median of 20% of normal at three years (Biomarin suffers minimal bleeding on valrox readout, May 28, 2019).

Valrox still looks approvable, but perhaps not as the once-and-done gene therapy that some had hoped for based on earlier data.

Sangamo believes that SB-525 could have a more durable effect, but of course it will need to prove this with longer-term data. The Alta trial will follow patients for up to three years, but Mr Macrae told Vantage: “We believe gene therapies require long-term follow-up for many years and are evaluating how to do this.”

As for side effects, the Alta trial saw one treatment-related serious adverse event of hypotension and fever, which was previously reported. The April data cut also found that one patient had liver enzyme elevations of more than 1.5 times the upper limit of normal (Two haemophilia A subjects help Sangamo erase 2019's losses, April 2, 2019).

The company reported another case of liver enzyme elevations today. Mr Macrae described the events as “not unexpected or concerning”, noting that other gene therapies using AAV vectors had seen similar enzyme rises and that, in the case of SB-525, these were managed with steroids and did not result in a loss of FVIII levels.

Sangamo’s study does not use prophylactic steroids, which could give SB-525 an advantage over another contender, Spark Therapeutics’ SPK-8011. Concerns about immunogenicity with this project spurred Spark to add a cohort to its phase I/II trial including prophylactic steroids; data are imminent, and might also feature at ISTH.

In addition, SPK-8011 has not managed to return FVIII levels to within the normal range.

High-dose valrox is already in a phase III trial, Gener8-1, and looks on track to become the first approved haemophilia A gene therapy, but there is room for improvement. The latest results will have strengthened Sangamo’s case, but more data are still needed before a final winner can be crowned.