The group buys out its partner Genetx, but inconsistent data spook investors.

First the good news for Ultragenyx: the latest phase 1/2 data drop for GTX-102, its antisense project for Angelman syndrome, did not feature the lower extremity weakness that forced it to pause the study in 2020. And there appear to be some signs of efficacy.

However, the results were inconsistent, and it is too early to call a win here. Ultragenyx is dosing higher but, in the meantime, it reckons it has seen enough promise to purchase Genetx, its partner on GTX-102, for $75m up front. Investors were unimpressed, sending Ultragenyx’s stock down 12% this morning.

There are no approved therapies for Angelman syndrome, which affects the nervous system and causes severe physical and learning disabilities. The disorder, which affects around 60,000 people worldwide, normally becomes apparent between the ages of six and 12 months.

Previously the phase 1/2 trial showed promising efficacy, but the lower extremity weakness was seen after patients received GTX-102 at 20mg and 36mg, the two highest of four doses studied. The side effect was thought to be related to local inflammation caused by GTX-102, which is administered intrathecally.

Therefore, when the clinical hold was lifted last year, the protocol was amended to use lower doses. In the UK and Canada four to seven-year-old patients started at 3.3mg (cohort 4), and 8-17 year olds at 5mg (cohort 5), with the option to go up to 14mg every three months; in the US there was a flat dose of 2mg.

Yesterday, Ultragenyx released data on cohorts 4 and 5, and the US cohort.

The safety update included 14 patients; there were no serious drug-related adverse events, and the most common events were vomiting and Covid. Encouragingly, there were no signs of inflammation.

While GTX-102’s safety profile now looks reassuring, signs of a clinical benefit are harder to tease out – not helped by the small number of patients involved and the uncontrolled nature of the study. 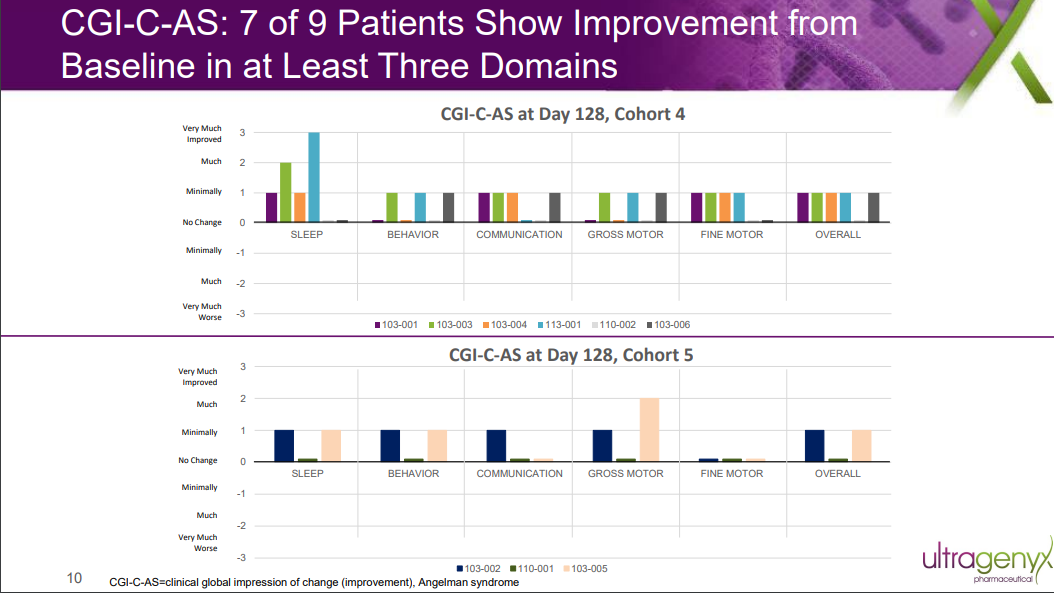 Here, seven of nine patients in cohorts 4 and 5 showed an improvement over baseline in at least three domains. These results were far from emphatic, however, and Evercore ISI analysts noted that they looked less impressive than those seen with the low US dose, “indicating observer biases that are hard to tease out”.

Furthermore, other scores produced even more inconsistent data, and “the most objective endpoint, EEG, didn’t show anything”.

Ultragenyx – which has said it is “all in” on Angelman – will want to show better efficacy in its next update, in late 2022 or early 2023. The group has already started dosing higher in the UK and Canada: in cohort 6 patients under eight will start with 7.5mg, while in cohort 7 those aged eight or over will begin with 10mg.

The latest results probably justify pushing on, especially given the unmet need in Angelman. A couple of other companies are also developing UBE3A-AS antisense assets, but the pipeline is fairly sparse.

In addition to the assets below, Radius Health has a synthetic cannabidiol, RAD011, which it previously said it would take into Angelman this year; however, it is unclear whether this will be a priority under its new owners.