The green light comes two months early, revealing data that were being held back for Asco, but what does Yervoy bring to the table?

Yesterday’s early US approval for Bristol-Myers Squibb’s Opdivo/Yervoy/chemo triplet in front-line lung cancer brought a second surprise: the trial on which it is based, Checkmate-9LA, was to have been kept under wraps until this weekend’s Asco conference, but now the drugs’ updated prescribing information has revealed all.

The label discloses obvious points of interest like survival curves and detailed adverse event data. But it also lays bare Checkmate-9LA’s design flaw: the triplet was compared against chemo alone, so prescribers have no way of telling how Opdivo plus chemo but without Yervoy might have stacked up. What precisely Yervoy brings to the table should be a big part of this study’s discussion at Asco.

Unfortunately there is no way of answering this question accurately. The only first-line NSCLC trial that had tested Opdivo plus chemo was part 2 of the controversially overhauled Checkmate-227 study, whose part 1a had separately backed this month’s US approval for Opdivo plus Yervoy in ≥1% PD-L1 expressers (Bristol’s persistence pays off, but for now the relevance is limited, May 18, 2020).

A final analysis of Checkmate-227 part 2 was presented at last year’s Esmo Immuno-oncology congress. This revealed 18.3 months of median overall survival for Opdivo plus chemo, versus 14.7 for chemo alone, an effect that of course lacked statistical significance.

Importantly, because of varying baseline patient characteristics and subtle differences in the chemo regiments, a direct comparison between ’9LA and part 2 of ’227 make for a particularly difficult cross-trial analysis. Indeed, the chemo-only control cohorts seem to have performed very differently in the two studies.

However, right now this looks like the only way of splitting out Yervoy’s added benefit. And the bald and unsophisticated upshot is that in overall survival terms the triplet beats chemo by 4.7 months, whereas an Opdivo/chemo doublet beats it by 3.6 months.

To continue this unsatisfactory cross-trial analysis, are the net 1.1 months gained by adding Yervoy worth it? In ’227 part 2 45% of Opdivo/chemo recipients suffered treatment-related Grade 3/4 adverse events, 10 points higher than control, while the corresponding number for the Opdivo/Yervoy/chemo triplet of ’9LA is 47%.

Of course all such considerations are now purely theoretical; a doctor cannot prescribe a first-line NSCLC patient Opdivo plus chemo. Opdivo plus Yervoy is available as long as the patient’s tumour shows at least 1% PD-L1 expression and, as of yesterday, the Opdivo/Yervoy/chemo triplet can be given to all-comers.

Still, a spanner in the works could still come from the EMA, which is carrying out its own review of Checkmate-9LA. It was the EMA that had earlier dismissed Bristol’s attempt to secure approval based on Checkmate-227, causing this filing to be withdrawn, as well as slating an earlier combo trial that did not discern the individual constituents’ contributions; its verdict on ’9LA should be interesting.

For now the relevant decision in the US will again be whether to prescribe the Bristol combos in preference to Merck & Co’s Keytruda, available as monotherapy in ≥1% PD-L1 expressers and as a chemo combo in all-comers.

This should not detract from the design and shortcomings of Checkmate-9LA. 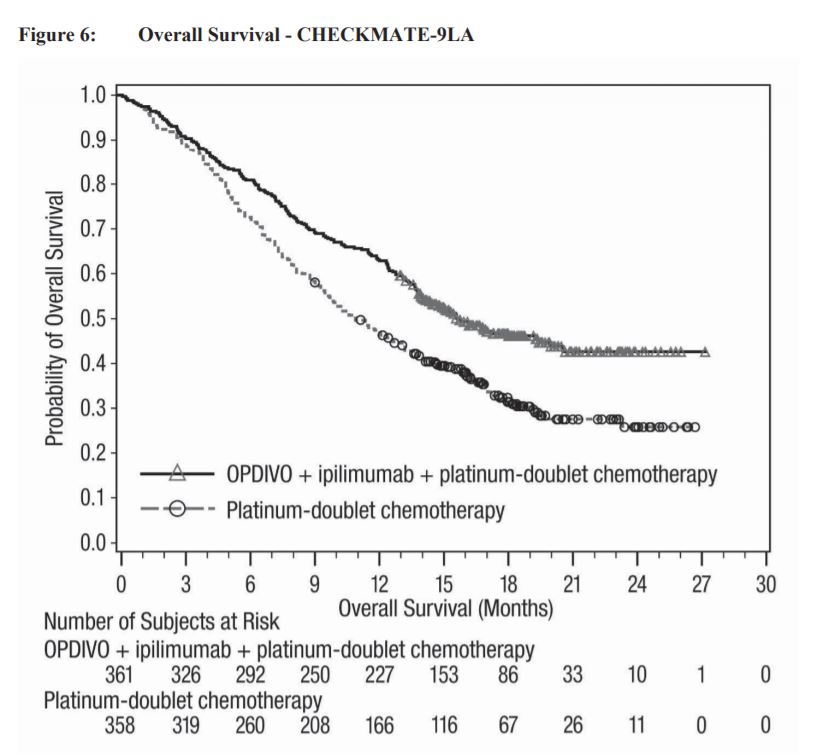 Testing times for Opdivo – and for the US regulator

Astrazeneca drops out of one lung cancer immunotherapy race