Vertex clears the way for Arrowhead

As Arrowhead prepares to unveil key data in alpha-1 antitrypsin deficiency, its life is made easier by Vertex’s second failure in the disease.

Vertex’s admission that its second try in the rare respiratory disease alpha-1 antitrypsin deficiency has failed will embolden Arrowhead, whose RNAi therapeutic will now have a clear shot at becoming the first therapy to treat the underlying cause of this condition.

It will come as cold comfort that the phase 2 study of the Vertex project, VX-864, toplined yesterday, actually hit its primary endpoint, showing a statistically significant increase in functional alpha-1 antitrypsin (AAT) levels versus placebo. But, to Vertex’s credit, the group admitted that the result fell short of clinical relevance, and VX-864 will now be shelved.

Investors' eyes now turn to Arrowhead’s Takeda-partnered ARO-AAT, a project using RNAi to knock down the liver’s production of mutant AAT and prevent build-up of this protein in the liver, the cause of liver and lung disease.

Arrowhead reported positive 24-week liver biopsy results last September, and now a key catalyst awaits: the full dataset of 12-month biopsies is due to be unveiled at a late-breaking presentation at Easl on June 26.

One thing seems certain, however, and this is that Vertex’s latest approach using small-molecule correctors to fix the misfolding of AAT is a dud. VX-864 is now headed for the scrapheap, where it will join VX-814, a structurally distinct project that failed last year. Though, after VX-814, few had expected VX-864 to work, Vertex still opened down 9% this morning.

Vertex said in its phase 2 study VX-864 yielded mean plasma levels of functional AAT of 6.2μM at 28 days. This amounted to a roughly 2.2μM increase from baseline, which compared against the 0.1μM decline seen in placebo recipients was statistically significant for each of three 100-500mg doses (p<0.0001).

However, the absolute 6.2μM number fell well short of the threshold for clinical relevance, which Vertex had set at 11.0μM. Moreover, there was no dose response, with all three doses yielding roughly the same pattern of functional AAT production across the 28 days. 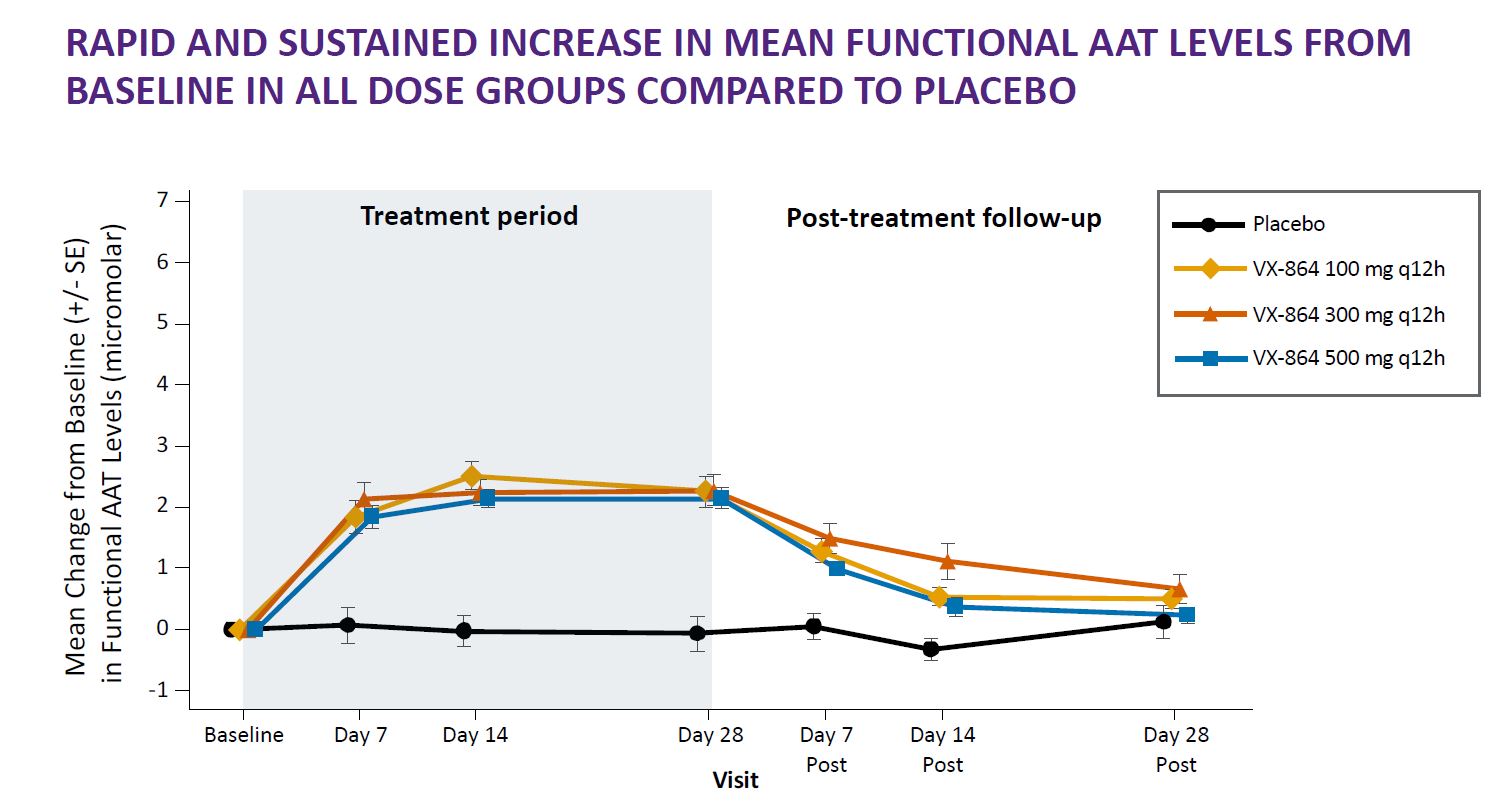 The study had recruited patients with the PiZZ genotype, meaning that they were genetically homozygous and thus had severe disease, being unable to transport AAT from the liver to the lungs.

While the VX-864 data are overall negative, they are by no means a disaster for Vertex’s plan to become an AAT deficiency player; the company is showing that its small-molecule correctors are mechanistically doing what they are supposed to, albeit not strongly enough.

An important point is that VX-864 yielded no discontinuations due to side effects, and no serious toxicities. With VX-814 the company could not even find a therapeutic window, and the project was brought down partly by liver toxicity; yesterday Vertex stressed that liver function tests were similar between placebo and VX-864 cohorts.

And the company is not giving up. Its next iteration of AAT correctors is set to enter clinical testing next year.

Kinnate is the latest Raf player to trip up

Takeda gets the pipeline blues