Threats to Spinraza are mounting, but Biogen still has cards to play

Competition is looming from Novartis and Roche but the latest results from Spinraza show that Biogen still has a strong case to make for the SMA therapy.

The latest results from Spinraza’s Nurture study confirm that Biogen’s spinal muscular atrophy product has set a very high efficacy bar for rivals to beat. The promise of more convenient therapies mean that these data are far from the end of the story, of course, but any expectation of a quick demise for Spinraza in the coming years is likely to prove wide of the mark.

US approval for Novartis’s gene therapy, Zolgensma, and very encouraging readouts on Roche’s oral contender, risdiplam, have prompted analysts to rein in expectations for Spinraza sales, the table below shows. But the Nurture results, in pre-symptomatic infants, paint a very clear picture of the full potential of this therapy, something that rivals are years away from being able to do.

Nurture recruited 25 babies of up to six weeks in age who would go on to develop SMA type 1 or 2, the most severe forms. At the European Academy of Neurology (EAN) meeting in Oslo today Biogen unveiled a three-year data cut showing that after treatment 88% of patients can walk independently, and 92% with some assistance; all are alive and none require permanent ventilation. This vastly surpasses what would be typically expected from babies with these forms of SMA, the majority of whom would probably not have lived for more than two years.

These results represent an improvement on data presented at AAN almost two months ago. At a press conference earlier today one of the investigators from Nurture, Professor Valeria Sansone of the Nemo Clinical Center in Italy, said that there is evidence to suggest that further improvements should be seen; the trial is due to run for five years.

At AAN in May Novartis presented data from a similar trial of Zolgensma in very young pre-symptomatic patients, called Spr1nt. While the caveats of cross-trial comparison still apply here, studies of very young subjects will probably offer the best way to compare these therapies in the absence of head-to-heads. And given that treating as early as possible is thought to produce the best results, these trials should also show what these interventions are fully capable of.

Much less information is available from Spr1nt, which has yet to complete enrolling its 27 targeted subjects, according to clinicaltrials.gov. The Novartis trial only got underway in April 2018, while Nurture has been running since early 2015.

Novartis said that of the 18 patients enrolled, all were alive and breathing without assistance, though the longest follow-up was only nine months. Four patients could sit without support at that stage, and improvements on the Chop Intend Scale, which measures motor skills, indicated that all the babies were achieving milestones not typically seen in those with SMA.

Zolgensma has the advantage of being a “one and done” therapy, of course, though its real durability has yet to be confirmed; long-term safety is also something of an unknown. Spinraza is much more of a known quantity, but it has to be administered via a spinal tap every four months.

Roche only recently started a study called Rainbowfish in pre-symptomatic babies, so data on risdiplam are some way away in this setting.

Prof Sansone said that more follow up is still needed with the gene therapy; Novartis is widely expected to demonstrate similar levels of efficacy over the longer term.

“A physician is very happy when there are more options,” Prof Sansone told journalists. “My position is that we also have to be cautious. We have safety data and follow-up data from 7,500 patients [with Spinraza], this to me is very reassuring. But you have to also offer the possibility of having a gene therapy – though the pros and cons need to be presented.”

The strength of the Nuture data show that for parents facing an SMA diagnosis at the birth of a child, the decision between Zolgensma and Spinraza will not be an easy one. 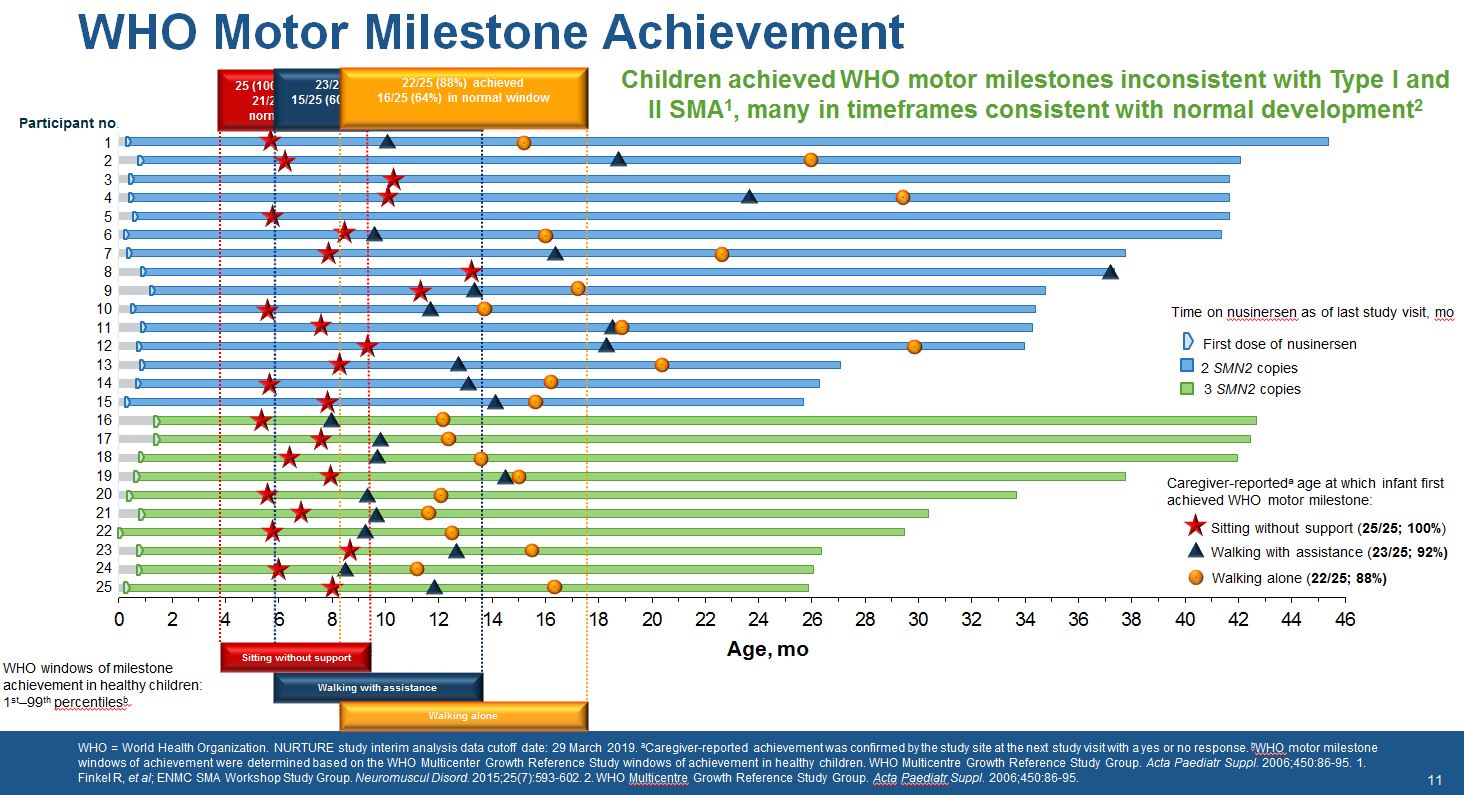