Full data from Alnylam's pivotal givosiran programme show a big impact for severe patients, though a case still needs to be made for a broader population.

The Envision study of Alnylam’s acute hepatic porphyria therapy givosiran was already known to have shown a significant reduction in the life-threatening attacks associated with this disease. Today at EASL the company revealed to experts the magnitude of that benefit.

The mean annualised rate of composite attacks fell 74% relative to placebo, a number that should impress physicians and make regulators comfortable with granting approval. However, three serious safety events mean that this is not a dead cert.

Still, all bar one of the 94 subjects recruited opted to move into a long-term extension study, suggesting that patients with severe forms of AHP consider givosiran a therapy worth trying.

Another important point to remember is that only 50% of patients were attack free, compared with 16% for placebo. Dr Manisha Balwani, Envision's lead investigator who presented the data to journalists at the conference yesterday, declined to comment on the responses seen in the other 50% of patients, saying that the data had yet to be fully analysed on a patient-by-patient basis.

This is certainly a question that regulators will want answered, while safety will be scrutinised. The three serious safety events – high fever, kidney disease and raised liver enzymes – were previously announced last month, with the hit on the top line (Alnylam touts givosiran win despite toxicity fears, March 6, 2019).

Theresa Heggie, Alnylam’s senior vice-president of Europe and Canada, pointed out that kidney and liver problems could be a burden of this disease, but acknowledged that she could not rule out an effect of givosiran.

“Transient changes in [signals of kidney disease] resolved, and we were encouraged by that. And in those patients we continued to measure liver enzymes, and they normalised. We believe the risk-benefit ratio is very much in favour of givosiran,” she told Vantage at EASL.

Many harbour concerns about underlying toxicity issues with the company’s RNAi technology platform, and will be waiting with interest to see what regulators will make of these signals. 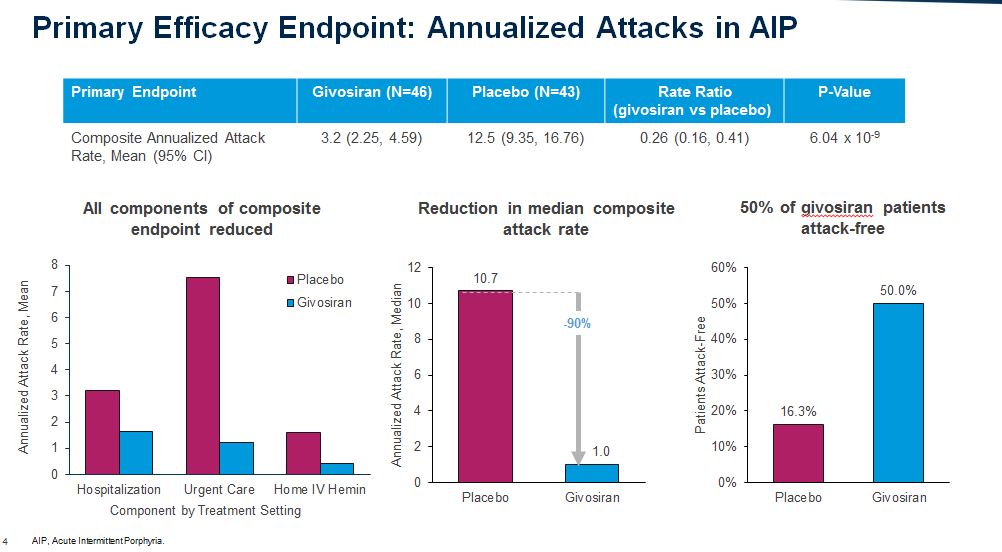 Other data provided for the first time included the median annualised rate of composite attacks, which was lowered by 90% relative to placebo, and details on a number of secondary endpoints regarding disease biomarkers, all of which were lowered dramatically, by 73-93%, pointing to givosiran’s big impact on the underlying disease.

Secondary endpoints regarding pain and fatigue, which can blight the lives of sufferers of AHP in between the extreme attacks, were not hit. Dr Balwani said that responses on these measures had been seen in earlier trials, and that she hopes to see a benefit as treatment progresses. The primary and secondary endpoints were measured at six months, a relatively short time for a therapy that will presumably be taken chronically.

Evaluate’s sellside consensus has givosiran sales reaching $397m by 2024, and analysts currently assume that the therapy will be restricted to more severe patients, those who suffer several attacks a year. For Alnylam to persuade patients and payers that less severe patients could benefit, those more subjective secondary endpoints need to start looking more encouraging over time.

Ms Heggie confirmed that the company intends to pursue value-based pricing agreements with payers in the US, a strategy that no doubt speaks to the company’s intention to build a case for the therapy in a wider set of patients.

Alnylam plans to complete regulatory filings for givosiran in the coming months in both the US and Europe; Ms Heggie said the group will be ready to launch in the US by the end of the year.

If all goes smoothly that would be two approvals in as many years for the rare disease company, which should go some way to removing lingering  scepticism about its technology.

EASL 2019 – Having filed to float, all Cirius needs now is the data

ESC 2018 – Pfizer impresses with tafamidis, but amyloidosis battle goes on