Full data from the trial position the Pharmamar/Jazz small-cell lung cancer drug to remain safely on the US market.

After the failure of the potentially confirmatory Atlantis study Pharmamar/Jazz’s Zepzelca risked being pulled from the US market. This scenario now looks unlikely, given the full Atlantis data just presented at the IASLC World Conference on Lung Cancer and the supportive comments from a discussant.

Though Atlantis failed its primary overall survival endpoint it did show a numerical benefit favouring Zepzelca. It seems that dosing the drug lower than in its earlier trial proved deleterious, and a clearly defined patient group – those with platinum-sensitive disease – does appear to benefit. While Atlantis remains a clear failure it appears unlikely to give the FDA ammunition for a market withdrawal.

Zepzelca monotherapy’s accelerated US approval in second-line SCLC was backed by an uncontrolled basket trial that yielded a 35% ORR and median OS of 9.3 months. Atlantis, meanwhile, compared second-line Zepzelca combined with doxorubicin against active control of topotecan or the CAV chemo regimen.

The controlled study was toplined as a failure last December. Today Dr Luis Paz-Ares, of Hospital Universitario 12 de Octubre, told World Lung that its primary endpoint yielded a 3% reduction in risk of death, with a highly non-significant p value of 0.7. 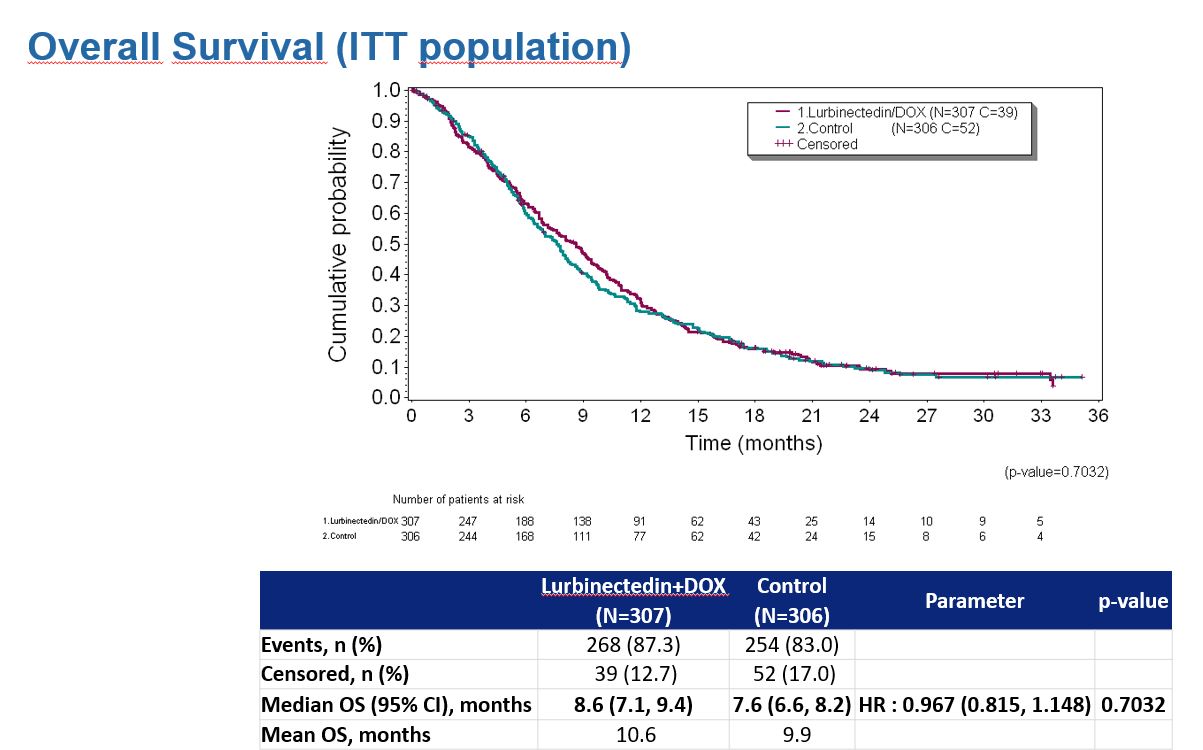 However, this was perhaps where the bad news ended. There was a numerical OS benefit at median, of 8.6 versus 7.6 months, for instance. PFS, meanwhile, was equal for the two cohorts at a median 4.0 months, but thanks to a survival tail that developed late in the study this measure overall yielded a 0.831 hazard ratio, with a nominal p value of 0.04.

If these hints of activity suggest that some patient subgroups do derive a benefit then Atlantis’s forest plot provided further comfort. Those with CNS involvement at baseline did much better on control, but those without appeared to favour Zepzelca, for instance.

The chemotherapy-free interval (CTFI) from completion of first-line therapy, a stratification factor, was also illuminating. Patients with a CFTI at 180 days or more experienced a 15% reduction in risk of death on the Zepzelca combo versus chemo alone, but there was no benefit for those at 90-179 days, while a CFTI under 90 days favoured control.

The CFTI metric is important, as it suggests whether a patient’s SCLC is platinum sensitive or not. A CFTI above 90 days is considered to indicate platinum-sensitive disease, and it is in clearly platinum-sensitive patients that Zepzelca seems to be working.

This finding from Atlantis backs up Zelzelca’s uncontrolled basket trial, which showed that ORR in subjects with a CTFI ≥90 days rose to 45%, while median OS was 11.9 months.

Another crucial point is that Atlantis employed a lower Zepzelca dose, 2.0mg/m2, versus the 3.2mg/m2 used in the basket study. In hindsight it appears that adding doxorubicin to Zepzelca did not compensate for the latter’s lower dose, and, according to Dr Charles Rudin of Memorial Sloan Kettering Cancer Canter, doxorubicin might have added toxicity.

Indeed, Dr Rubin, the World Lung discussant today, called Atlantis a win on toxicity, highlighting much reduced rates of anaemia, neutropenia and thrombocytopenia with the Zepzelca combo versus control. He opined that Atlantis supported Zepzelca in recurrent SCLC, and said doctors should stick to using the drug as monotherapy.

Pharmamar/Jazz’s bear case might now shift to Zepzelca’s label being narrowed. Based on the World Lung discussion market withdrawal looks to be off the table.

AACR 2019 – Xospata meets the conditions of its US approval