The Gottlieb legacy: a surge in unproven treatments?

Many in the biopharma sector will rue the departure of Scott Gottlieb, an FDA commissioner who pursed a permissive path for novel drugs at the US regulator. Will his successor be similarly inclined?

Biopharma's opinion of Scott Gottlieb as US FDA commissioner was made plain on news of his surprise resignation yesterday: both the Nasdaq biotechnology and S&P pharma indices dropped in response. Mr Gottlieb was considered a friendly face by drug developers and investors, a safe pair of hands in an administration rife with unpredictability.

His open-minded approach to innovative therapies was of particular benefit to drug developers and investors; the long-term benefit to patients has yet to be defined. And while it is hard to pin a regulatory trend on one person, a look at the surge in surrogate endpoint-based drug approvals over the past two years illustrates the regulatory climate over which Mr Gottlieb presided. 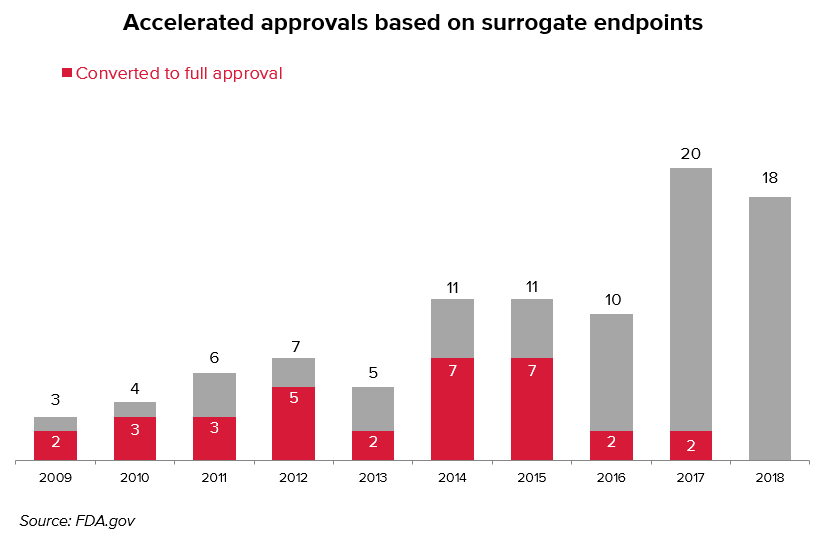 The table above, derived from data provided by the FDA, shows how approvals based on surrogate endpoints have rocketed. In most cases these products were given a green light based on data from small, single-arm trials, and their real effectiveness remains far from proven.

In part this trend reflects the huge amount of money thrown at cancer, which lends itself to quick approvals in end-of-life settings where options have run out; all but one of the surrogate endpoint-based approvals last year were in oncology. It is also true that this trend was developing long before Mr Gottlieb arrived; an uptick can be seen from 2012, when the breakthrough therapy designation was introduced.

As such, the regulatory pendulum was already swinging in biopharma’s favour, and the highly controversial approval of Sarepta’s Exondys 51 occurred on Mr Gottlieb's predecessor’s watch, for example. But it is hard to argue that he did not run with the idea of regulatory permissiveness when it came to novel medicines.

It is not clear what this period of relative leniency will mean for patients in the longer term; concern about lack of oversight in turning these supplementary approvals into full approvals is warranted, as the table above shows. Perhaps Mr Gottlieb would have pursued confirmatory trials with equal gusto.

But many believe that the notion of a super-flexible FDA – which Mr Gottlieb did nothing to contradict in his short time in the post – helped drive the biotech bull market, emboldening companies and investors to take risks.

Of course, Mr Gottlieb’s legacy extends to much more than innovative therapies. He also addressed the plight of generics, overseeing a big push to speed new lower-cost medicines to market, helping the Trump administration to claim that it was working to address price competition.

From enthusiastically introducing novel regulatory guidelines to publicly attacking vaping companies for targeting teenagers, Mr Gottlieb has rightfully been applauded for many of his initiatives. The big question now is who will succeed him, and whether they will plough a similar furrow.

As far as a successor goes, the attention turns to Amy Abernethy, the principal deputy commissioner who took office at the beginning of 2019. An oncologist, Ms Abernethy had been chief medical officer at Flatiron Health, which was acquired by Roche last year, and before that had been a medical professor at Duke University.

Among her recent academic publications have been several articles on the use of real-world evidence in clinical trials as well as patient reported outcomes, a focus of the FDA in recent years thanks to the biopharma sector’s lobbying efforts (Vantage point – Patient-reported data gain traction in FDA decisions, June 8, 2016).

For Ms Abernethy to go from principal deputy commissioner to interim head and later being confirmed would follow the path set by Mr Gottlieb’s predecessor, Robert Califf. Her industry background should give some comfort to a biopharma sector that has been startled by Mr Gottlieb’s sudden resignation.

The sector should also take comfort from the fact that Alex Azar is now HHS Secretary. A Cowen analyst, Rick Weissenstein, wrote yesterday that as the final decision would rest with the former big pharma executive the choice was unlikely to revert to some of the previously floated candidates, several of whom were seen as potentially disruptive.

Another question surrounding Mr Gottlieb's departure is whether longtime FDA leaders like the drug review chief, Janet Woodcock, or oncology director Richard Pazdur, will follow. Mr Weissenstein noted that Mr Gottlieb had served as an effective "buffer" against political pressure for the career civil service staff thanks to his previous experience at the agency, and his successor might not be as skilled. Mr Pazdur, in particular, has been seen as an ally of oncology-focused biopharma, and his departure would be lamented.

Whoever ends up replacing Mr Gottlieb, his resignation is not likely to affect normal operations like drug approvals or regulatory drafting in the short term, but investors have been left fretting about what this means for the long term. Any deterioration in the US regulatory climate could easily take the wind out of biopharma’s sails.

Pharma bends on US pricing debate

Political gridlock could be good for biopharma