The micro-cap biotech Trovagene did not feature in most investors’ expectations for the AACR meeting, but today opened up 30% on what it claimed was a major success. On the face of it an 88% clinical response in eight evaluable subjects with Kras-mutated colorectal cancer treated with its PLK1 inhibitor onvansertib seems impressive. However, the group’s definition of clinical response is unorthodox, as it includes stable disease; counting only actual remissions the response rate is a far less impressive 38%. Moreover the treatment included chemo and Avastin. Trovagene’s AACR abstract was a placeholder with no clinical data, so the remissions were only disclosed at yesterday’s presentation by USC Norris Comprehensive Cancer Center’s Dr Afsaneh Barzi. The patient numbers are small, but the onvansertib result is not a million miles away from the 25% response rate (50% at the target dose) Mirati reported at last year’s Triple meeting with its Kras G12C inhibitor MRTX849. Still, onvansertib looks like joining Verastem’s pan-Raf/FAK combo as having some viability in Kras-driven tumours even though it does not target the Kras protein itself. And the market response in part reflects the fact that Trovagene is still worth less than $20m. 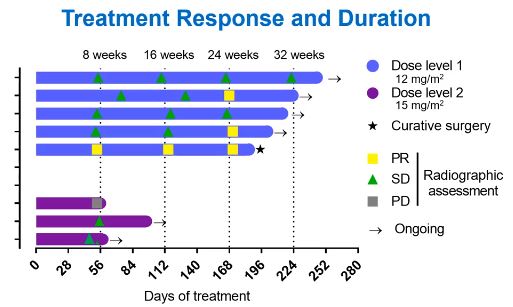 Amgen strikes while its rival is down

Novartis moves to climb up the Kras rankings