Almost in stealth mode, Cytokinetics has pressed on with the heart failure project, which now awaits a key regulatory catalyst.

Remember omecamtiv mecarbil? It might be back. The Cytokinetics heart failure project, whose technically successful Galactic-HF study was nevertheless bad enough for Amgen to pull the plug on a licensing deal, could soon be reviewed by the FDA.

Remarkably, however, Cytokinetics will not say whether omecamtiv has been filed, though its strategy is clear: to position the cardiac myosin stimulant at the severe end of heart failure, where it claims the effect in Galactic-HF was strongest. Within the next two weeks investors will be reminded of this project again when a second phase 3 trial, Meteoric-HF, yields topline data.

That said, Meteoric-HF is not central to omecamtiv’s filing, Cytokinetics stressed at its recent presentation at the JP Morgan healthcare conference. Rather, the trial, testing omecamtiv’s effect on exercise tolerance, could be supplemental, and Mizuho analysts reckon it could ultimately expand the drug’s commercial opportunity by 10-20%.

That opportunity now hinges on Galactic-HF, a heart failure trial in which, back in October 2020, omecamtiv failed to improve cardiovascular death, a key secondary endpoint in which Astrazeneca’s Farxiga has shown a benefit.

Galactic-HF did technically hit its primary endpoint, a composite of death or heart failure events, but the 8% risk reduction (p=0.0252) seriously underperformed Farxiga’s 26%. Cytokinetics’ share price plunged, and the result was sufficiently underwhelming for Amgen to hand back rights the following month.

But at subsequent medical meetings Cytokinetics has banged the table regarding a subgroup of patients with severe heart failure, in whom it says Galactic-HF demonstrated a more convincing 20% reduction in death or heart failure events. This subgroup comprises patients with NYHA level III-IV and ejection fraction at or below 30%.

This subgroup is said to have driven the benefit in Galactic-HF overall, and the post hoc analysis is backed by the fact that in patients who did not meet these criteria omecamtiv had virtually no effect. 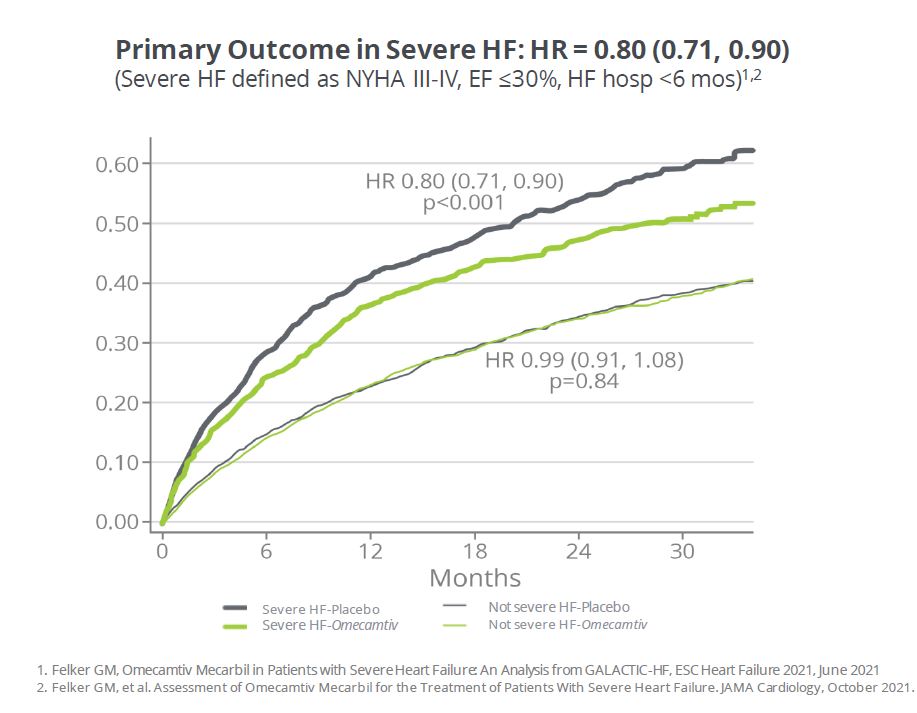 This might have been a post hoc data dredge, but investors seem to have bought into the story. Since October 2020 Cytokinetics shares have more than doubled, though this will also have been down to success with aficamten (CK-274), a separate project.

Cytokinetics has sold a small royalty on both assets to Royalty Pharma in two separate transactions, of which the one on aficamten, signed two weeks ago, was done specifically to fund omecamtiv's potential commercialisation.

The proof of the enthusiasm lies in regulatory interactions, though Cytokinetics remains guarded over whether omecamtiv has even been filed. The group had targeted filing by 2021 year end, but decided not to reveal anything until the submission was accepted or rejected. “As the FDA has up to 60 days to communicate back to us we'll be communicating the status of that NDA hopefully soon,” Robert Blum, its chief executive, told JP Morgan.

Meanwhile, the Meteoric-HF trial assesses how omecamtiv might improve exercise capacity in heart failure patients, specifically looking at change in peak VO2 on cardiopulmonary exercise testing from baseline to week 20, versus placebo.

Peak VO2 measures the amount of oxygen that can be delivered to tissues, and Meteoric-HF enrolled patients described as quite severely depressed in terms of oxygen delivery, specifically with peak VO2 of less than 75% of normal. Cytokinetics says the study is powered to show relatively small increases, but investors should focus on clinical relevance rather than mere statistical significance.

Cytokinetics says omecamtiv probably needs to show at least a 1ml/kg/min increase from baseline in peak VO2 – adjusted for placebo – to be clinically meaningful. Much will therefore hinge on how the placebo recipients perform.

The best case has omecamtiv approved this year, with a positive Meteoric-HF readout leading to a supplemental NDA filing to expand its label. Should such an admittedly low-probability scenario come about Amgen will rue the day it gave up on omecamtiv.

AHA 2020 – look out for the omecamtiv fault lines

Primary omecamtiv win is not enough