Encouraging immune responses and a competitive safety profile in a small trial seem to make Novavax’s vaccine a contender.

As a small drug developer that has failed to bring a product to market, despite more than two decades of trying, Novavax can be considered something of a wildcard among the many pandemic vaccine efforts. But data released last night on NVX-CoV2373 seem to suggest the company has a chance of crossing the finishing line.

The absence of a big pharma partner marks Novavax out among those already in the clinic – though in reality there are no Western vaccine majors that remain without a Covid-19 project. Novavax clearly believes this does not matter, and yesterday laid out plans to move into phase III by September, insisting that it would have 100 million doses ready to go by early 2021, and a couple of billion by the end of that year.

Helping the company towards that goal was the disclosure yesterday that the lower dose of '2372 tested, 5µg, worked just as well as a 25µg dose. This means that manufactured batches will go a lot further. Executives also raised the possibility of testing even lower doses in future trials.

NVX-CoV2373 needs an adjuvant and the study tested two doses, but these produced strong neutralising antibody and T cell responses. Novavax has released its data in a pre-print, and peer review of the results remains an important step. Still, what has been released so far seems competitive with data seen from Moderna, Biontech/Pfizer, and Astrazeneca, notwithstanding that it is almost impossible to compare the data released by the various players so far with any scientific rigour.

As well as the usual caveats of cross-trial comparisons, in this case researchers are using different ways to measure antibody responses – and it also remains unclear what levels might be required to confer immunity. Still, Novavax insisted that there is a strong relationship between the severity of the disease and neutralising titres, as shown on the slide below, which executives said compared favourably to the immune response elicited by its vaccine. 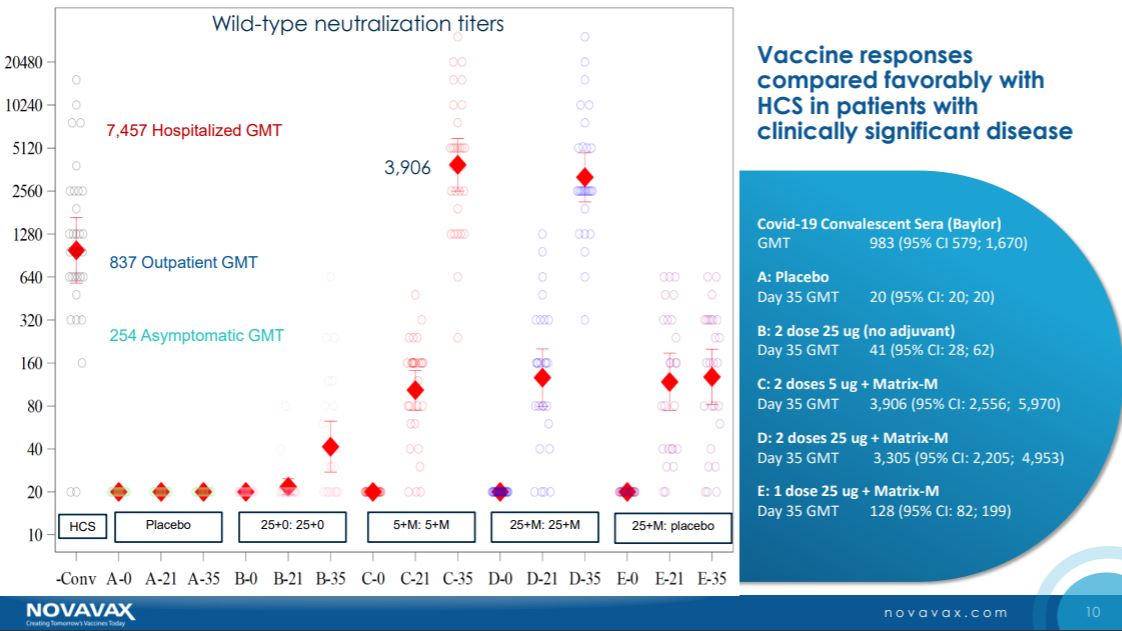 On safety, ’2373 also performed well, and arguably the project looks more benign than the Moderna candidate, which prompted worrying levels of fever and chills (Moderna's Covid-19 vaccine shows promise, July 15, 2020). Pfizer and Biontech have only published data on a project that in the end was not taken forward, saying the chosen candidate was more tolerable.

The main drawback with all the clinical data released so far is that it has been generated in healthy individuals, most of whom were young. Proving safety and efficacy in older patients and those with weakened immune systems, who are less able to tolerate side effects, remains the real hurdle for all of the Covid-19 vaccine projects.

To its credit Novavax said it will shortly be starting a 1,500-patient study that will extend the age range tested – these new data were generated in 131 patients aged 18-59. Its large phase III trial should begin in September, joining pivotal studies from Astrazeneca, Moderna and Biontech/Pfizer, which are already underway (Covid-19 vaccines move into pivotal development, July 28 ,2020).

With $1.6bn of Warp Speed funding and several manufacturing partners already in place, Novavax seems happy to go it alone for now. Lack of track record probably put off big pharma partners initially, but should ’2373 prove successful the company will surely need help with distribution. Big vaccine players that are further back in this race will be watching progress here with interest.

Investors meanwhile have been all over the Novavax story since February, helping the company become the best-performing biotech stock this year. After starting the year at $4, the stock is now trading at $179 per share with a market cap of $10.6bn, boosted by another 13% gain today. It should soon become clear whether this time Novavax has hit the jackpot.