A dissection of five years' biopharma buyout spending reveals that most deals are struck over preclinical and mid-stage assets, while buyers remain most interested in cancer and neurological disorders.

If deal-making fails to pick up this year sellers will need to be doubly sure that they have what buyers want. To help find these sweet spots Vantage has dug into biopharma’s M&A activity over the past five years, and found some clear trends.

For example, the majority of deals were struck over companies with preclinical or mid-stage assets, a statistic that remained true even as takeover activity dimmed over the past 18 months. In terms of in-demand therapy areas cancer-focused companies dominate, though therapies addressing the central nervous system were also a consistently big draw.

This analysis, derived from EvaluatePharma data, encompasses global acquisitions of research-stage companies between 2014 and 2018. It includes only those developing human therapeutics, and excludes medtech or genomics, for example. 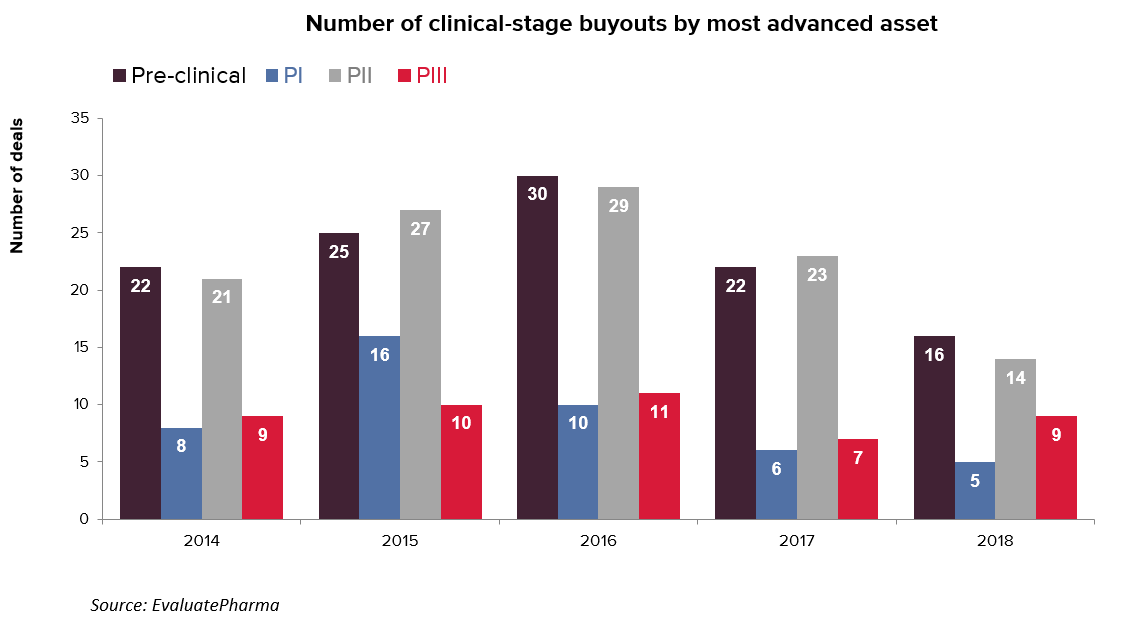 Kicking off with a look at deals by developmental stage, the trends are not hard to spot. Here, companies were classified by the stage of their most advanced asset.

There will always be more preclinical projects around than those in phase III, of course, so this pattern is not entirely surprising. The analysis also confirms that in most cases acquirers still want to see phase II data before pulling the trigger.

A second look at where the deals are happening in terms of therapy areas shows a predominance of oncology buyouts, with companies looking at neurological conditions also popular. These are both very broad areas of research, partly explaining the level activity relative to other fields.

Other notable hot areas include infectious diseases. Stand-out takeovers here include Johnson & Johnson’s acquisition of the RSV player Alios in 2014 for $1.8bn and Otsuka’s $430m swoop on Visterra last year. 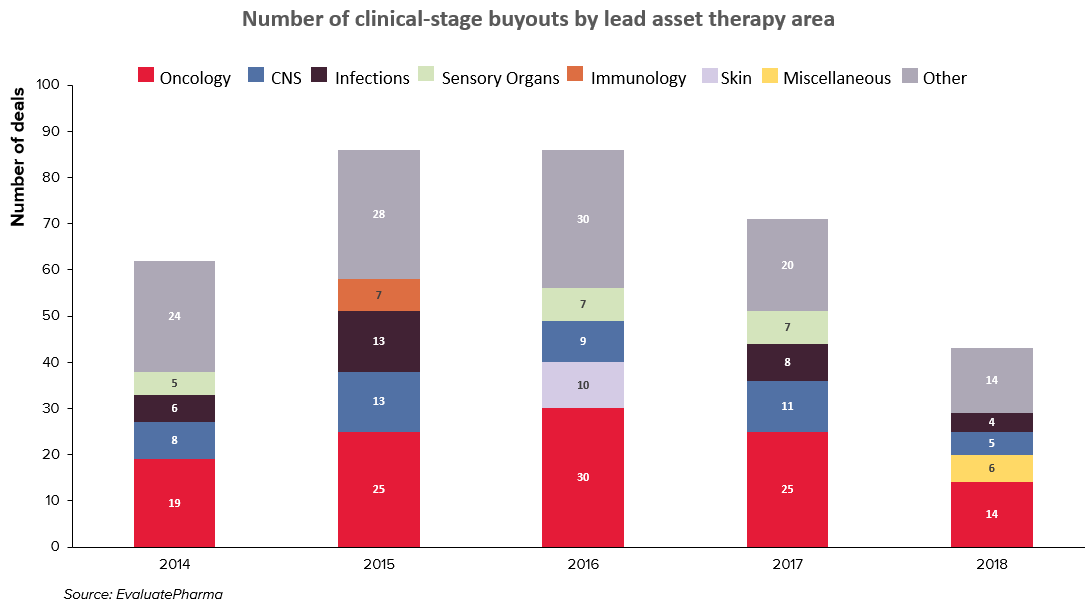 Looking at how much buyers are paying for these companies on average is more complicated. Cutting all deals by development stage comes with the huge caveat that the analysis encompasses a very broad range of companies, some single asset and others valued for a technology platform, all looking at markets of various sizes.

Slicing by therapy area provides a more comparable cohort of M&A targets, but a certain level of deal volume is needed for any analysis to be insightful. As such, oncology is really the only space where this is advisable.

The chart below suggests that preclinical cancer companies grew in attractiveness over the past five years, last year’s general dip notwithstanding, while phase I projects seem to have become less popular. The fluidity between phase I and II in oncology trials probably makes the distinction slightly irrelevant, however. 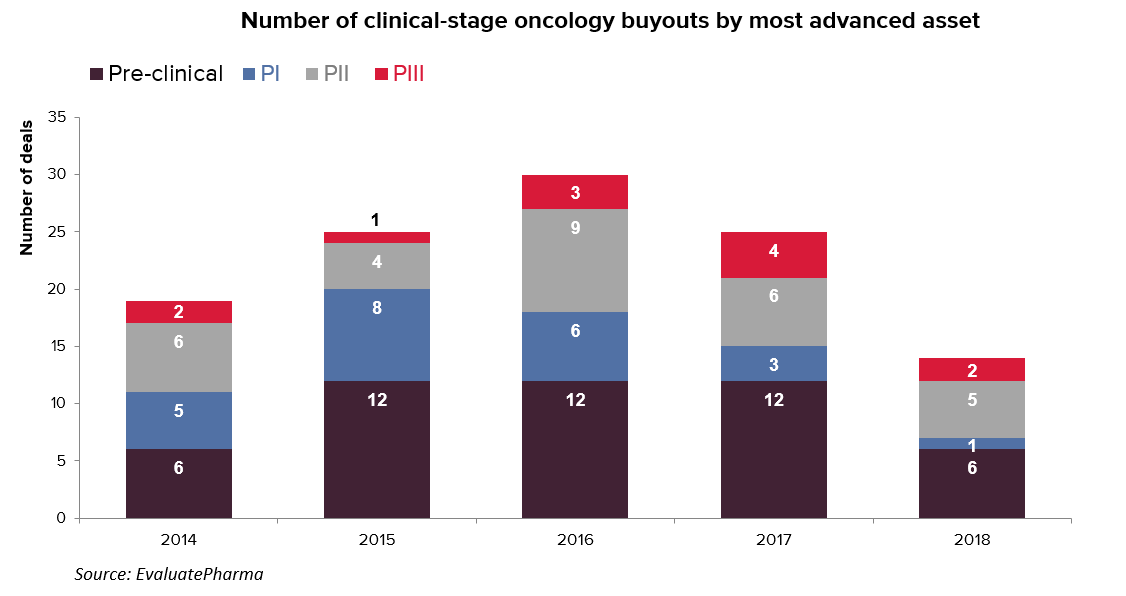 A look at average takeout prices is caveated by the small number of deals being struck each year, particularly in phase III. However, it certainly seems that companies with phase II assets attract the highest price tags, and that this price has been rising.

This reflects the narrative of 2018, when punishing valuations were frequently cited as a reason for keeping a lid of deal-making.

Intense rivalry over oncology projects means that very few small companies with promising assets make it into phase III before being taken out, hence the low deal volume here; this is probably true to a certain extent in most therapy areas.

It also means that large deals can easily skew the numbers, as was seen in 2018: Novartis’s takeout of Endocyte for $2.1bn, to add to its radiopharmaceutical franchise, and the immuno-oncology play Armo, which had its cytokine asset pegilodecakin in a pivotal pancreatic study at the time of Lilly’s $1.6bn buyout.

Of the 12 takeouts of phase III cancer companies over the five years of this analysis, only the two above involved sums over $100m. By comparison, 14 of the 30 phase II company buyouts involved prices above $100m. 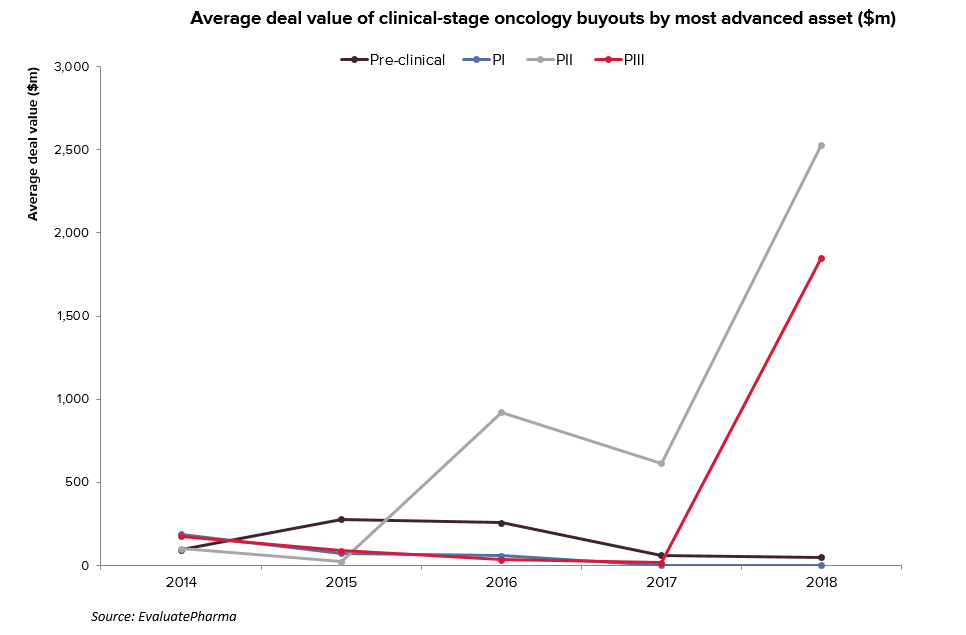 A handful of very large phase II company acquisitions also affects these numbers, and the bumps that can be seen in 2016 and 2018 were respectively caused by Abbvie’s move on Stemcentryx, for $5.8bn up front, and Celgene’s $9bn takeout of Juno in early 2018. The former has turned out to be an expensive mistake, and the jury is still out on the latter, proving that big bets do not always pay off.

A final observation here is a look at the total spending on oncology company buyouts over the five-year period. This suggests that this therapy area has largely bucked wider M&A market trends, which saw a big spike in deal values and volumes in 2014 and 2015, and declines since (As takeover hopes build, 2018 provides a low bar to beat, January 9, 2019).

Last year’s takeouts of Juno, Endocyte and Armo show that buyers of cancer assets are willing to pay up to get deals done. No wonder development dollars keep flowing into oncology. 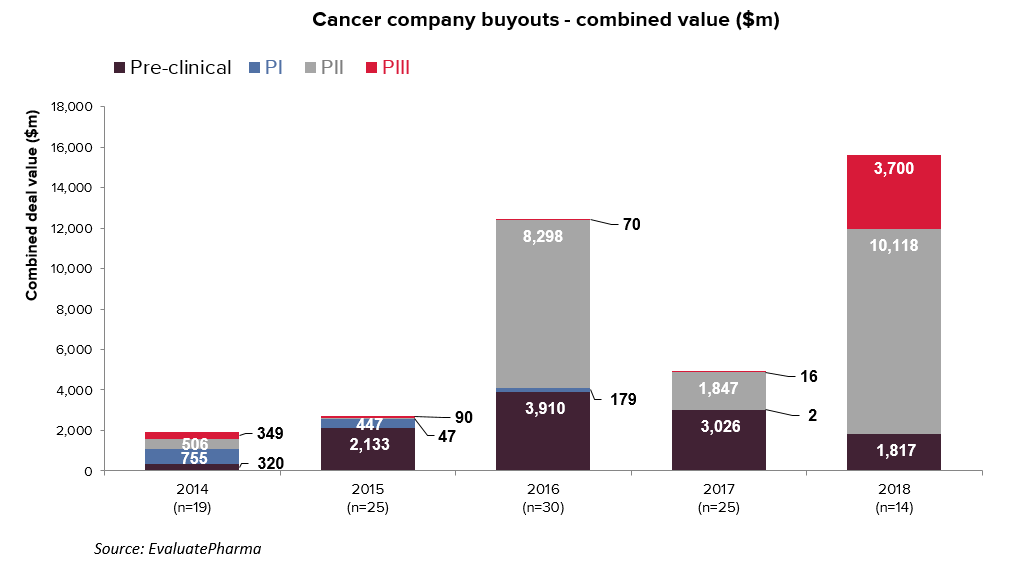 It’s official – oncology is king in the venture-backed world