The venture capital world is far from quiet, but the sums involved are certainly getting smaller. Young drug developers raised $3bn over 91 rounds in the second quarter of 2019, according to EvaluatePharma – the smallest haul in two years.

Looking behind the figures, it seems as if a dip in the number of $100m-plus rounds has largely driven the top line decline. Biontech’s huge $325m series B this week shows that mega financings are far from a thing of the past, but it looks like they might be seen less frequently this year.

Over the first half of 2019 there were 13 rounds that tipped $100m, and 53 that tipped $50m. A similar second half would mean an annual drop in both of these categories, although 2018 was a record-breaker never likely to be matched.

Looking at the number of financings taking place, it appears that 2019 could register a big decline, not only on last year but in comparison with the past five years.

On the other hand, perhaps 2019 will see a return to a more typical shape: the graph below shows that the second quarter tends to be the quietest, with the exception of last year.

The slew of financing news in July suggests that activity could pick up again. As well as Biontech, Revolution raised a $100m series C and Lepu Biotechnology got $131m from Chinese investors.

This analysis includes only developers of human therapeutics, excluding sectors such as medtech or diagnostics. 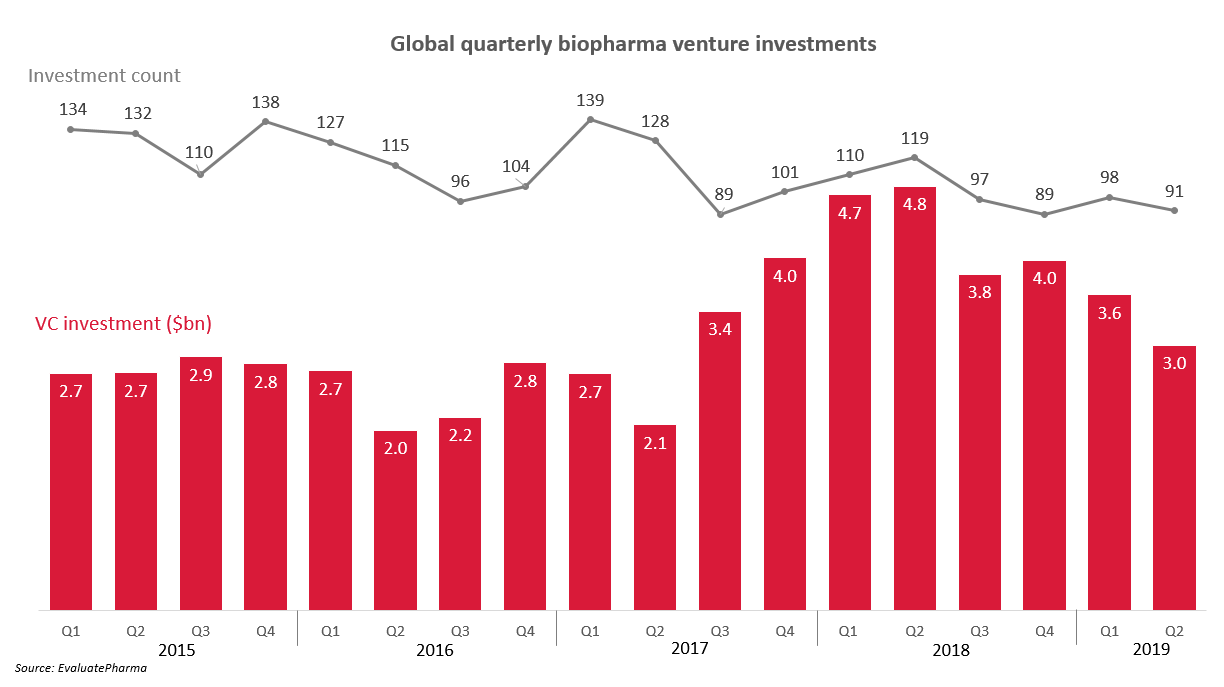 It seems certain that the peak of early 2018 has passed, so the next question is the depth of any retrenchment. Few considered the recent excesses sustainable but, equally, no one wants to see the money wells dry up.

The steady stream of financing news from the venture world makes a serious downturn look unlikely, in the immediate future at least. And the IPO market remains welcoming to fledgling drug stocks, which should help retain the interest of private investors in this space.

Equally, there are few signs that public or private investors are backing off from the highest risk propositions. For example gene therapy researcher Asklepios BioPharmaceutical – Askbio for short – is barely in the clinic, but managed to attract the biggest venture pot in the second quarter.

Still, one implication of the trend for ever bigger rounds is that fewer start-ups have been funded each year. It is still hard to know whether a winning investment strategy will emerge: much more cash to fewer companies, or smaller sums for more. Either way, the sun is still shining in the venture world, and the message to start-ups seems to be: let’s make hay.

Biopharma venture financing retreats, but not by much