Celgene CVR holders have been desperate to find out whether JCAR017 is approvable. Yesterday at Ash they got their answer... kind of.

Since Bristol-Myers Squibb completed its $74bn Celgene takeover the latter’s investors have been left holding an unusual financial instrument: the contingent value right. For this to pay out the Car-T therapy JCAR017 must secure US approval, which is why yesterday’s unveiling of data from the Transcend-NHL study at Ash was pivotal.

The best news came in the shape of a safety profile that appears meaningfully better than that of Gilead’s Yescarta and Novartis’s Kymriah. But with JCAR017’s me-too efficacy – and a worryingly low manufacturing success rate – there is little pressure on the US FDA to bust a gut to get this third Car-T therapy over the line.

And speed will be needed. The contingent value right (CVR) will only be triggered if three conditions are met, one being that JCAR017 (liso-cel) must secure US approval for lymphoma by December 31, 2020. Yesterday Bristol said that based on Transcend-NHL a US BLA filing would be completed by the end of 2019.

True, a 12-month turnaround for the filing is not impossible. But CVR holders will continue to fret over whether the FDA will actually deem the Transcend-NHL data sufficiently robust given that this is still, when all is said and done, a single-arm trial whose analysis paints JCAR017 in the best possible light. 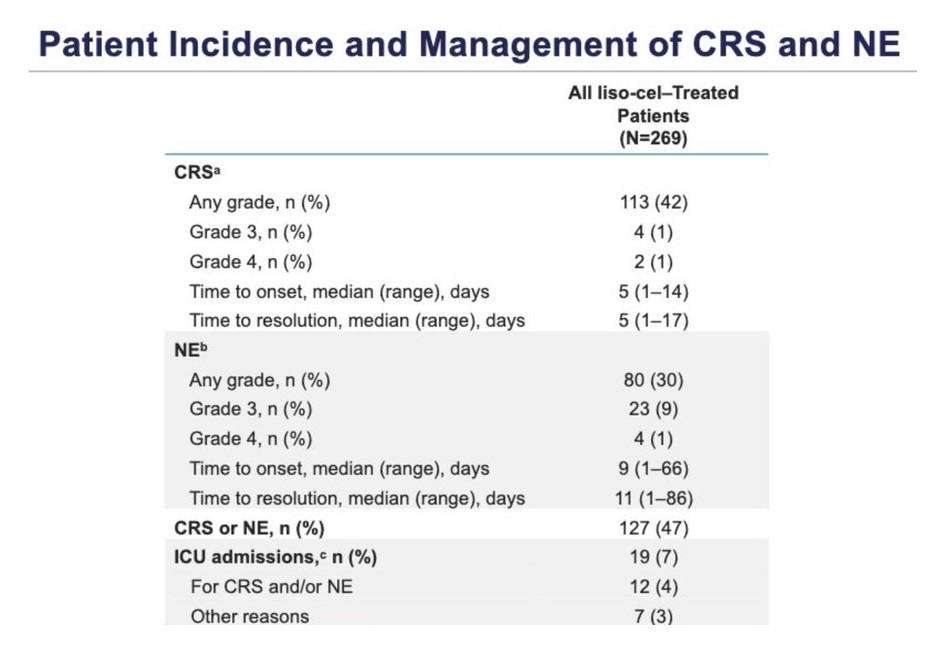 Yesterday’s analysis was the first meaningful data cut from Transcend-NHL for over a year. The lymphoma study was started by Juno, was then taken over by Celgene and deemed pivotal, and is now in the hands of Bristol.

At Ash Professor Jeremy Abramson, of Massachusetts General Hospital, said only 2% and 10% of Transcend-NHL subjects suffered serious cytokine release syndrome and neurotoxicity respectively. Given that rates of 10-30% are more typical of Car-T therapy, this represents a major argument in favour of JCAR017.

The finding could also justify JCAR017's extra manufacturing step to yield a product with a 50/50 ratio of CD4+ and CD8+ T cells. This is meant to result in a Car-T therapy that is more controllable and therefore safer.

However, this does make manufacturing more complex and more expensive. And, at a time when cytokine release and neurotoxicity are becoming controllable thanks to protocols suggesting use of Actemra and steroids, whether JCAR017 offers a real advantage is not clear.

And the news gets worse on the efficacy side of the equation, where the Bristol project looks no better than Yescarta across a variety of metrics including remission rates and survival. Of course the real devil will be in the detail of underlying patient characteristics.

Then there is the question of manufacturing success. Transcend-NHL actually enrolled 344 subjects, but for one reason or other only 256 actually ended up getting JCAR017 that conformed to manufacturing standards; 256 rather than 344 is being used as the denominator for efficacy analyses, flattering the data presented at Ash.

The issue will soon be in the hands of the FDA. No doubt the agency will perform its own analysis and, as it did with Kymriah, decide for itself what number of subjects enrolled is the appropriate one to use to calculate efficacy.

In the meantime the debate over manufacturing failure will rumble on. JCAR017 could not be manufactured to specification in 8% of the 344 Transcend-NHL subjects, while 33 died before it could be infused; 12 exclusions from the final dataset are classified simply as “other”.

No doubt some Celgene CVR holders will hail yesterday’s data a great success. All should ask themselves one key question: in the absence of overwhelmingly better efficacy, and with two similar products already approved, why should the FDA allow a third onto the market on the basis of another uncontrolled, single-arm study?

Cellectis interview – if at first you don't succeed...