An intriguing diabetes prevention signal was reported in a cut of Farxiga’s heart failure study, Dapa-HF, at the Annual Diabetes Association annual meeting this month. Investigators found that over the course of the study Astrazeneca’s SGLT2 inhibitor cut the risk of participants developing type 2 diabetes by almost a third.

Farxiga is effectively already available in this setting – its recently-granted heart failure indication is not limited to diabetics. But cardiologists represent a nascent market for SGLT2 inhibitors, and comments made at ADA suggest that this finding will help drive sales in Farxiga's new use; the data might also spur endocrinologists to consider using these agents earlier in diabetes management.

“Prevention of diabetes resonates with all of us, whether you are an endocrinologist, a cardiologist, or a general physician," said Dr Subodh Verma, a cardiologist at Michael’s Hospital in Toronto, at a session to discuss the Dapa-HF study. “These are really exciting new data.”

The diabetes prevention analysis was pre-specified in the study protocol, but the finding can only be considered exploratory. Dapa-HF was primarily a heart failure trial, which recruited 4,774 patients with reduced ejection fraction (HFrEF); around half the subjects did not have diabetes when they entered the study, and these were split evenly between active and control cohorts.

There are limitations to this analysis, Dr Silvio Inzucchi, lead investigator of Dapa-HF and professor of medicine at the Yale University School of Medicine, pointed out in his presentation at ADA. These include a relatively short follow-up, and the fact the study was not designed as a pure diabetes reduction trial.

However, he said that in the cohort of patients without diabetes at baseline Farxiga had a minimal effect on HbA1c or body weight. This suggests that SGLT2 inhibition is not merely masking the development of diabetes, Dr Inzucchi said, a concern that has been raised in the wake of other diabetes prevention studies with other glucose lowering agents. 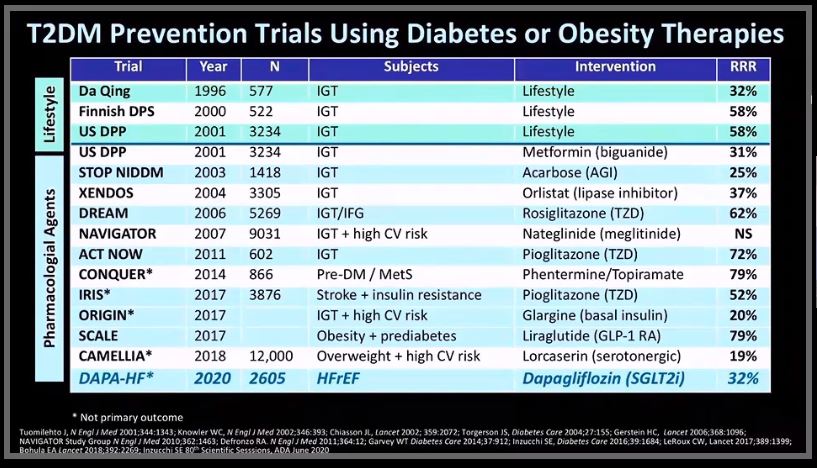 Nothing is specifically approved to prevent diabetes, although metformin is used in certain patients with pre-diabetes, and indeed many countries’ treatment guidelines recommend it. The prevention signal in Dapa-HF was primarily seen in patients on their way to becoming diabetics.

Metformin, which has long been generic, is considered to have the most evidence backing its use in prevention, largely based on a 20-year-old trial called the Diabetes Prevention Programme. This found that it reduced risk of patients with impaired glucose tolerance developing diabetes by 31%.

Dapa-HF finding a 32% risk reduction “suggest that in the HFrEF population perhaps consideration should be given to tweaking those guidelines to include the possibility of a SGLT2 inhibitor as baseline therapy, even before metformin”, Dr Inzucchi said.

He appeared to go even further, when asked whether endocrinologists should start rethinking the mantra that metformin is the first drug reached for to treat diabetes.

“Is there a mandate to use metformin outside of diabetes guidelines over and above a SGLT2, particularly in patients with established cardiovascular disease? I’d have to say no," he stated. "It’s mostly tradition that we use metformin. And many patients will require at least two drugs, so why not use metformin along with an SGLT2?"

All this will be music to the ears of makers of SGLT2 inhibitors. As well as Astrazeneca, Lilly and Boehringer Ingelheim, which jointly sell Jardiance, and Johnson & Johnson, with Invokana, have invested in huge clinical programmes to extend the reach of these drugs into cardiac and renal settings. And, as evidence of these agents’ broadly protective benefits has mounted, sales forecasts have surged.

The mechanisms behind the wide benefits seen with SGLT2 inhibitors are not fully understood, although most agree that many different pathways are likely to be in play.

Dr Jeffrey Testani, head of heart failure research at Yale, described the SGLT2 inhibitors as “smart diuretics”. He also predicted big uptake in the HFrEF setting, pointing out that existing medications were hard to use, required careful titration and carried safety concerns.

SGLT2s' “big advantage is that they are easy to use, and at the end of the day make people feel better,” he said at an ADA presentation. He also pointed out that patients with both heart failure and type 2 diabetes had a very bad prognosis; another exploratory analysis of Dapa-HF found that patients who did develop diabetes during the trial experienced a 70% increase in mortality.

SGLT2 inhibitors promote the loss of salt and glucose through the urine, and a cascade of physiological adaptations to this process could be providing a preventative benefit, speculated Joris Silon, senior vice-president of Astrazeneca’s cardiovascular, renal and metabolism unit. “You get this metabolic flexibility, which restores normal functions in the body.”

This might be just around the corner: the Dapa-CKD study, testing Farxiga in patients with chronic kidney disease, also includes an exploratory diabetes prevention analysis. The trial was stopped early for efficacy in March. The Credence study of J&J’s Invokana won that drug approval in diabetics with CKD, but it did not enrol non-diabetics.

As in Dapa-HF, the big question is whether non-type 2, CKD patients will benefit to the same extent as those with diabetes. Mr Silon said he had not seen the Dapa-CKD result, but hoped for a strong outcome. “Because we stopped the trial for overwhelming success, it means that the cardio-renal protection is there … whether you are type 2 diabetic or not.”

Reducing the risk of end-stage renal disease or death in all CKD patients will be the big win here, in much the same way that reducing heart failure hospitalisations and deaths for all patients was the goal in Dapa-HF. A second diabetes prevention signal could be considered the icing on the cake for this drug class, which continues to demonstrate benefits in an ever wider pool of patients.

Key clinical trial readouts for big pharma in the second half

After Lilly shrugs off schizophrenia failure pipeline must deliver