Nine IPOs have got away so far this year, and one of them is very big indeed.

The most notable aspect of the medtech IPO market over the first six months of 2018 is the sheer variety in the size of the offerings. Naturally the largest was the spin-out of Siemens Healthineers, which raised $5.1bn on the Frankfurt exchange in March. But the first deal of the year was the Swedish group Obstecare’s debut on Stockholm’s Aktietorget, which raised the equivalent of just $20,000.

There was great geographical variety, too: five European offerings – none of them on the Euronext – three US deals and two Korean (see analysis below). Device companies are staying close to their home market. But IPO activity is rising overall – with 10 medical device companies having floated at the half-year point, 2018 is already close to the full-year totals for both 2017 and 2016.

The uptick in IPOs is partly a consequence of the drop in acquisitions this year. Fewer companies are buying, many of the very largest companies having already closed gigantic mergers. Consolidation means that mid-stage groups have no choice but to turn to the public markets for growth capital.

The creation of the independent Siemens Healthineers business is not, perhaps, an IPO in the classical sense, being the separate listing of a long-established unit rather than the next step on a five or 10-year-old company’s path to growth.

Still, it would be remiss to let the biggest IPO in medtech and even biopharma history pass without comment. It is important to remember that the $5.1bn raised in Healthineers’ IPO does not come close to representing the value of the company: Siemens floated just 15% of the business, conferring a company valuation of around €28bn ($35bn).

Though the listing in March was priced at a slight discount to the preannounced range, the shares have done quite nicely since. Investors might have concluded that if medtech is a safe haven sector, a deep-rooted business with tens of thousands of customers, newly free to explore M&A as a possible additional route to growth, might be a particularly safe choice therein.

In listing in Frankfurt Healthineers has tapped into another trend: moving away from the US. The second largest IPO so far this year, that of the bone fixation device maker Medartis, was a rare Swiss deal, and the Nasdaq First North saw two deals with fellow Scandinavian exchange Aktietorget hosting another.

It might be that the large venture financings seen over the past few years, particularly of certain US companies, are inflating valuations to the point where a listing would be difficult to get off the ground.

Grail, for example, which has scored a succession of vast funding rounds, is rumoured to be considering Hong Kong for a $500m IPO, despite being based in Silicon Valley. The Nasdaq seems to be losing its dominance. 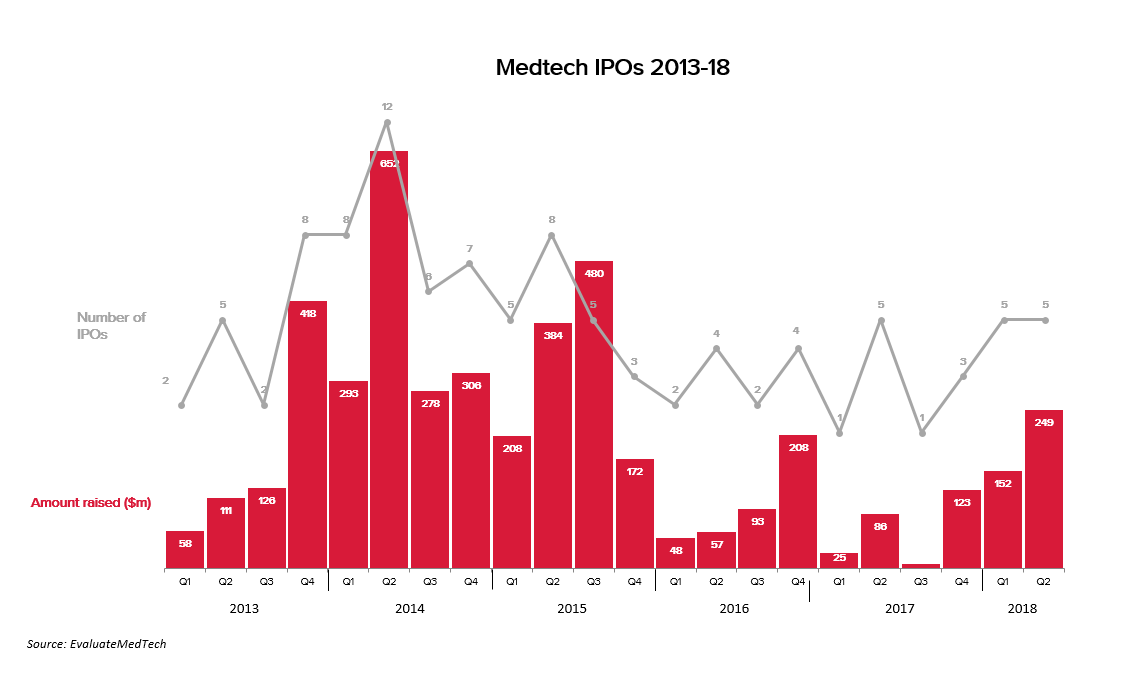 The graph above analyses the data on a quarterly basis – excluding the two megadeals of recent years, Healthineers and Convatec’s $1.9bn float in 2016, to give a better idea of the underlying health of the market. It suggests that companies’ chances of floating are improving, albeit slowly. With M&A activity down sharply in the first half of the year, the ability of companies to access the public markets is becoming increasingly important.