Pipeline projects are forecast to contribute a substantial proportion of future sales at Abbvie and Lilly, though the same cannot be said for all big drug developers.

Should sales growth driven by new products be valued more highly than income wrung out of additional indications? Those who answer yes might be interested to discover that, among big pharma, the top lines of Glaxosmithkline, Pfizer and Novartis are the most reliant on novel projects in 2024.

Another way of looking at this would be to say that these companies represent high-risk propositions. And that those at the opposite end of the analysis below look better placed to deliver projected growth; Merck & Co, Bristol-Myers Squibb and Johnson & Johnson are all heavily reliant on line extensions for new sales. Whatever your viewpoint, the data make it clear which firms are seen as having the most bountiful pipelines, in terms of contribution to 2024 sales: step forward Lilly and Abbvie.

Development-stage assets and new indications are seen contributing 16% and 17% respectively to these companies’ total prescription drug sales in 2024, according to consensus data from EvaluatePharma. Astrazeneca and Novartis are not too far behind, but compared with the likes of J&J and Roche the difference in potential pipeline contribution is notable. 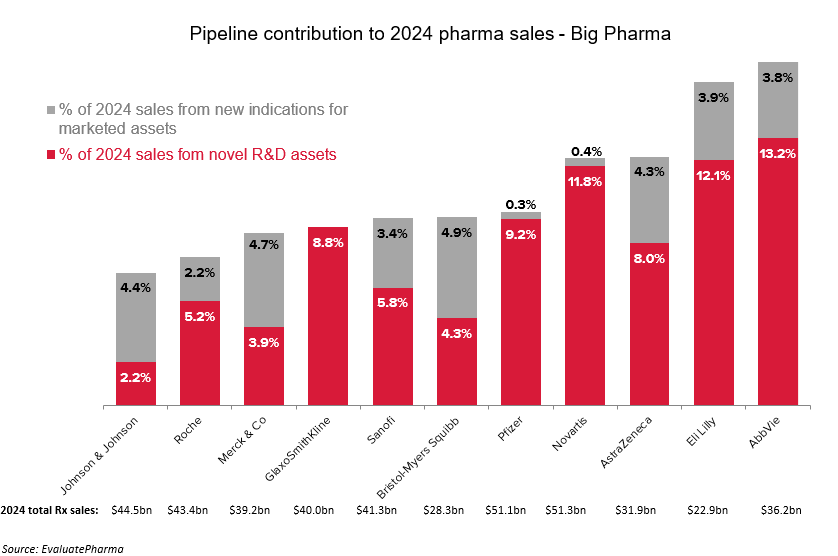 Of course this analysis does not tell the entire story and represents a snapshot in time. Pfizer yesterday won approval for Talzenna (talazoparib), a Parp inhibitor considered one of its most valuable pipeline projects that will fall out of any future analysis of pipeline contribution.

This means that recently launched products that are set to make a significant future contribution to sales are not captured here. So for example Roche is in the midst of rolling out two of its most substantial new therapies for several years in Hemlibra and Ocrevus. The sellside is not forecasting sales in any further indications for either drug, although both are expected to become $4bn-plus products.

This also highlights a major caveat of this analysis: the data on future sales in additional indications rely on sellside analysts forecasting and splitting out this information, something that is not always done in great detail.

More robust forecast data are available on novel products, and here the pipeline prospects clearly differ between these big pharma groups. Notably, these expectations are typically attached only to one or two products, highlighting the precarious nature of these future sales.

Turning to big biotech, the reliance on novelty for future sales growth compared with the pharma group is patently clear, though this should be expected from a sector with a reputation for innovation.

Only Amgen looks like a pharma company in that it has notable indication expansion in its sights, specifically for Blincyto in other haematological conditions. In many ways, this well-established big biotech has acted more like a big pharma name for some years now. 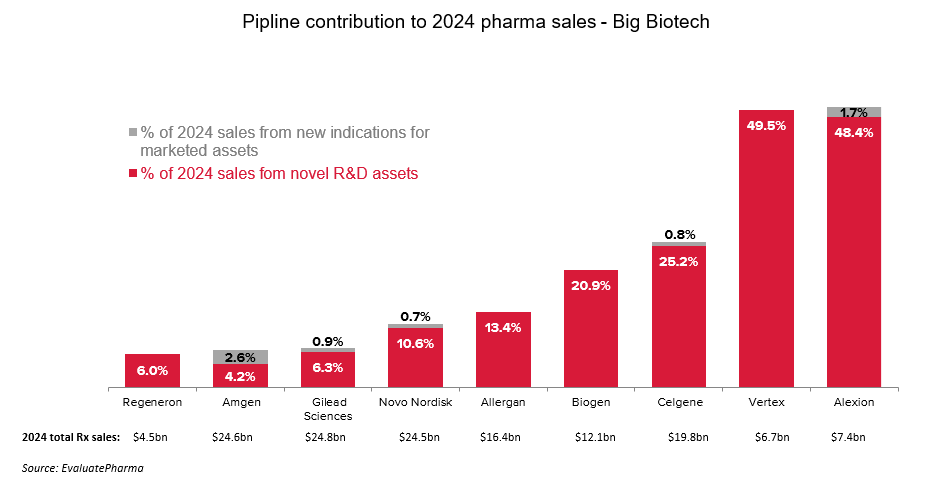 As part of a less mature industry, biotech companies should carry a higher risk, and these companies could be expected to have more riding on their pipelines. In reality the novelty of the pipelines of the clear leaders above is probably excessively flattered. Alexion’s forecast pipeline sales are almost entirely attributed to ALXN1210, essentially a longer-acting version of Soliris, while Vertex has much riding on a new cystic fibrosis triple, components of which are already available.

Investors might have fallen out of love with big biotech in recent years, but this analysis shows that these groups are still innovating. Had these numbers been run five or 10 years ago the rate of innovation would probably have looked even more impressive, largely explaining the love lost.

The need to source new innovation no longer exists only on the minds of big pharma executives; many of the companies in both of these analyses are under pressure to find new sources of growth. A beleaguered pharma or biotech CEO would probably not mind whether this comes from a novel product or a new indication.