Biopharma companies put the brakes on product deals last year, with the drop driven by a decline in oncology transactions. Meanwhile, a look at the big spenders shows how Celgene’s cash will be missed.

Sky-high asset valuations look to have finally taken their toll on licensing deal activity, which dropped last year to a five-year low. Transactions struck over individual assets held up pretty well in 2017 and early 2018, even as the M&A markets slowed, so what looks to be a similar retrenchment in a major source of revenue for small drug makers is notable.

Digging deeper into the numbers, compiled by EvaluatePharma, shows that a surprisingly quiet third quarter put a big dent in the 2018 total, though the second and fourth quarters were also slow; activity looks to have returned to pre-biotech boom levels. Oncology also generated fewer up-front dollars last year than has been seen recently, providing another explanation for the dip. Dwindling M&A activity has been blamed on overpriced assets and buyers’ poor track record in putting cash to work, factors that presumably also apply to the licensing deal market. This saw a burst of transactions in 2014 and 2015 when investor appetite for all things biotech soared, but looks to have pulled back.

This analysis only includes licensing deals where an up-front value was disclosed, focusing on the most significant transactions that biopharma companies struck. It ignores the “bio-dollar” value that is frequently never realised, and focuses on the initial cash sum that changes hands.

This means that the count of transactions shown here under-represents the true level of licensing activity, though the trends will be largely representative of the entire market.

Large deals inevitably skew the numbers, a case in point being the tie-up between Astrazeneca and Merck & Co primarily over the former’s Parp inhibitor, Lynparza, in 2017. This cost an initial $1.6bn, the largest upfront figure since at least 2010; Bristol-Myers Squibb’s $1bn payment to corner Nektar’s immuno-oncology hope NKTR-214 last year ranks as the second-largest, tied with the $1bn that Merck & Co paid Bayer for certain rights to various cardiovascular projects back in 2014.

Deals of this size can quickly inflate the top-line values, and it tends to be oncology products that attract such large sums: three of the five largest up-fronts this decade have been paid for cancer assets. The dominance of this therapy area is apparent when it is stripped out of the total up-fronts paid each year, below. 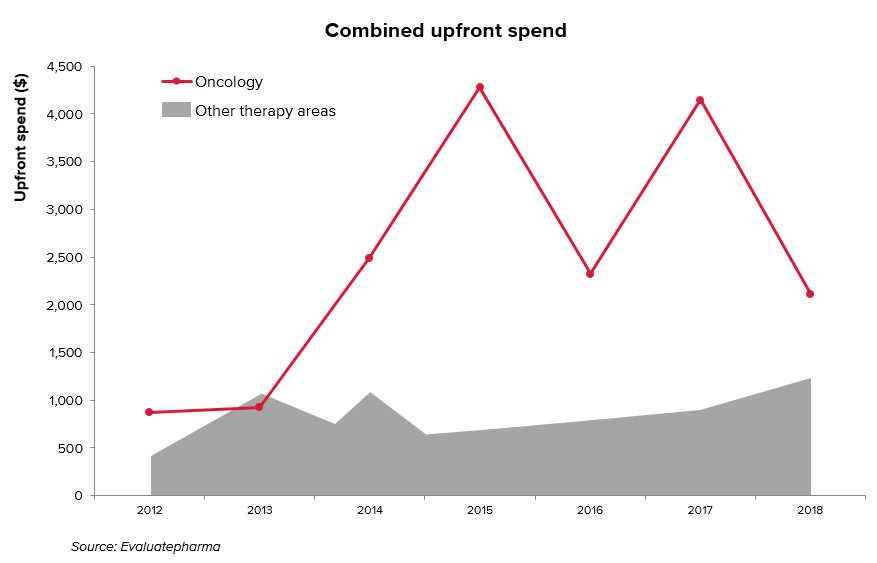 Oncology has really stood out since 2014, though the gap has narrowed again recently, outside of the large outlier deals. Notably, if the $1bn paid out for NKTR-214 is removed from last year’s numbers, there is no gap at all. Presumably this pattern reflects buyers’ disappointment with progress in the immuno-oncology world.

Central nervous system deals were the closest in value to those in oncology last year – the total up-front figures came in at $1.2bn versus $2.1bn, the smallest delta between these two therapy areas since 2012, according to EvaluatePharma data. A new 10-year collaboration between Biogen and Ionis over neurological diseases gave a big boost to the numbers for CNS collaborations last year; this comprised a $375m up-front fee, the largest for this therapy area since at least 2013.

Rare diseases also had a big year in 2018, led by the licensing deal between Akcea and Ionis over two amyloidosis candidates and Novo Nordisk’s acquisition of North American rights to the endocrine disorder therapy Macrilen. The latter saw Strongbridge bank $145m on the deal closing while the former, essentially an exercise in financial engineering, saw Akcea transfer $150m to its parent company.

The final analysis here looks at which companies have been splashing the cash since 2013, and it is not surprising to see Celgene neck and neck with big pharma players. Smaller companies will miss the biotech’s business development teams at the table; many of their big bets might not have paid off but the company was frequently applauded for an open-minded approach to deal-making.

Bristol only makes the top 10 thanks to the Nektar deal, while Merck takes the top spot largely because of the $1.6bn it paid for a share in Lynparza.

Again, it is obvious that oncology is a high priority for these big players. Two big deals announced today in the bispecifics space shows that there is still appetite for novel approaches in this highly competitive field. However after a period of huge investment into cancer drug development – indeed, some might argue over-investment – those hoping to find a partner need to ensure that they are not simply following the pack.