Asco 2020 – Enhertu impresses, but can it live up to high hopes?

Enhertu is associated with some very big numbers: the $1.4bn that Astrazeneca paid Daiichi Sankyo to secure rights to the Her2-targeting agent, and the billions in sales that the sellside forecasts, for example. In the clinical realm at Asco this year, response rates reported in three tumours were also impressively high.

While analysts’ sales projections were arguably swelled by the deal terms, very competitive efficacy is harder to refute. Two physicians discussing Enhertu data at virtual Asco over the weekend acknowledged as much. However, with lung toxicities still leading to patient deaths, despite this side effect being well documented, Daiichi and Astra face a challenge moving Enhertu into more valuable earlier treatment settings.

This will surely be required for Enhertu to meet current forecasts, which see global sales topping $4bn by 2026, according EvaluatePharma’s sellside consensus. It is notable that this projection comprises some very different outlooks, with the minimum and maximum forecasts around 50% higher or lower than that $4bn average.

Banks with numbers at the low end of the range assume that Enhertu will never move beyond a last-resort therapy, in certain diseases at least, where the benefits more obviously outweigh the risks. All three studies detailed at Asco concerned these types of patients, most of whom had been heavily pretreated and were running out of options.

In Destiny-CRC01, for example, colorectal cancer patients had received at least four lines of prior therapy, and some had received 11. In Destiny-Lung01 most subjects had had two prior treatments, with some on their sixth.

The lung results received perhaps the most effusive reception, and a look at the waterfall plot of responses shows why. Almost all patients responded, with objective remission rate hitting 62% and median progression-free survival hitting 14.2 months.

Dr Benjamin Levy of Johns Hopkins, reviewing the trial for Asco, described Enhertu as “the best drug in my mind that I have evaluated for Her2-mutated lung cancer". 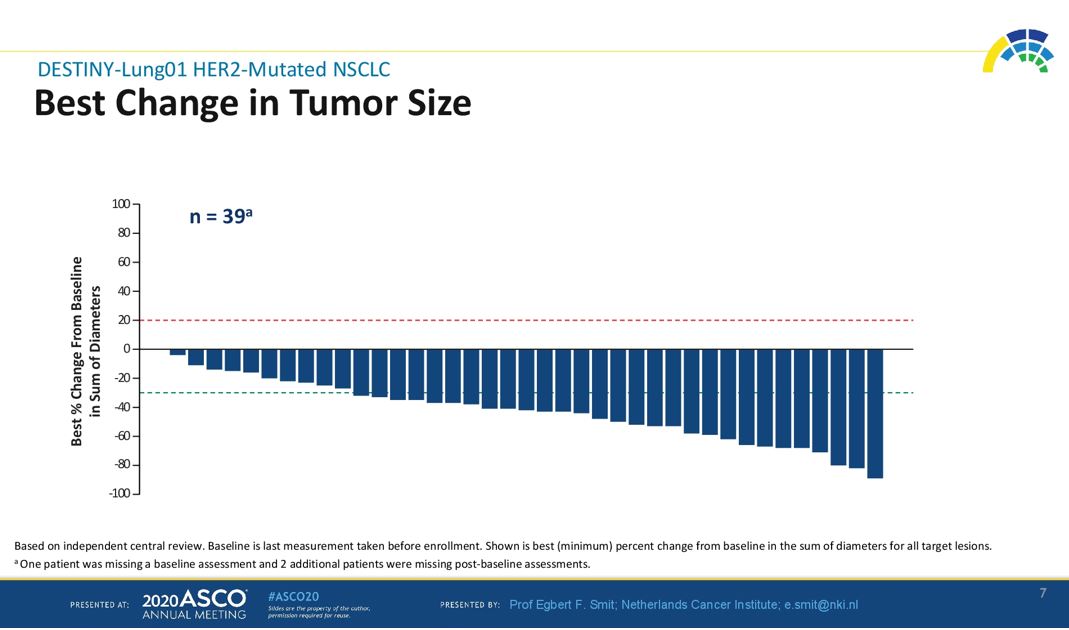 Still, she pointed out that it was not known whether a Her2-specific approach was superior to standard of care options in these patients – the academic-sponsored S1613 study could help answer this question – while it is also unclear whether Enhertu is a better rescue than traditional Herceptin.

Destiny-Gastric01 was also presented at Asco – this registrational study was known to have succeeded – and a four-month survival benefit over chemotherapy seems to give Enhertu a good chance of accelerated approval in this setting. Indeed, Astra and Daiichi are expected to file for quick approvals in all of these three tumour types.

The specific toxicity associated with Enhertu is interstitial lung disease, and related pneumonia, and this side effect was seen across all studies presented at Asco. Rates were in the same ballpark as those seen in the breast cancer studies that won Enhertu approval, with the drug being attributed to three deaths. It is clear why much more consideration will go into backing this drug in less sick patients.

Breast cancer will be the first indication to yield results in earlier settings, with three studies recruiting second and third-line patients. Destiny-Breast02, Destiny-Breast03 and Destiny-Breast04 are all still recruiting, with first data expected in 2021, Astra confirmed to Vantage.

The ’04 study is particularly interesting as it selects patients with low Her2 expression. Earlier studies confirmed Enhertu's effectiveness in these patients, who do not typically respond to existing Her2-targeted agents, and the drug's developers have made much of its purported ability to extend the reach of Her2 targeting. Still, it is notable that at Asco it was revealed that two exploratory cohorts of low Her2 expressers in Destiny-CRC01 had failed to respond to treatment.

Destiny-Gastric01 also stratified patients by Her2 expression, although these subgroups have yet to be detailed. Astrazeneca declined to share the results with Vantage, saying data would be presented at later medical meetings, and a spokesperson said the lack of signal in CRC01 should not be read through to other trials.

On a post-Asco call Daiichi laid out an ambitious clinical programme for Enhertu, including 17 new clinical studies, encompassing first-line trials in breast, lung and gastric cancers. It seems that a low Her2 strategy is only being pursued in breast cancer, however.

Targeting low Her2 expressers is not Enhertu’s only USP, of course; the drug has elicited responses in patients who had failed on mechanistically similar agents. But with a side-effect profile already threatening to cap its potential, neither Astra and Daiichi, nor analysts defending sky-high sales forecasts, will want to see a trial like Destiny-Breast04 fail.

SITC 2019 preview – Pieris joins the quest for a better Herceptin