After years of waiting, courtesy of Allogene investors at last have an allogeneic Car-T dataset comparable with autologous therapies.

Allogene scooped its upcoming Asco presentation by revealing results at a “CD19 forum” last night, likely hoping to avert disappointment at the limited data contained in the Asco placeholder abstract that went live yesterday. The forum had some effect, sending Allogene’s stock up 11% premarket, though this turned to a 1% decline early this morning.

Perhaps most importantly, the lymphoma data show its anti-CD19 Car-T therapy ALLO-501 to be on a par with autologous rivals Yescarta, Kymriah and Breyanzi – in more than just a handful of patients. The results are “the first to demonstrate durability for an allogeneic Car-T”, argued Allogene’s chief executive, David Chang.

The last time the ALLO-501 data, from the Alpha study, were presented was a year ago: there was promise, but only nine subjects were evaluable (Asco 2020 – early allogeneic Car-T promise, May 14, 2020). Thus investors looking for a knockout blow, after years of slow progress under ALLO-501’s originator, Cellectis, were left waiting.

As of yesterday they have a bigger dataset to work with. An April 19 data cut revealed 41 evaluable lymphoma patients dosed, and the focus was on 32 who had not previously received a Car-T therapy. The headline numbers here were a 64% overall response rate in 11 subjects with large B-cell lymphoma, and 81% in 21 with follicular lymphoma, a less aggressive cancer.

For a cell therapy to be viable off the shelf additional boxes need to be ticked. Thus it was noteworthy that Allogene’s data showed no graft-versus-host disease, just one serious neurotoxicity, and a 27% rate of cytokine storm, with all cases below grade 3.

And the company played up other advantages, including that the average time from enrolment to treatment was five days, and only one subject could not be dosed. In contrast, the need to wait for an autologous therapy to be produced results in weeks of vein-to-vein time, and pivotal trials of approved treatments have as a result seen up to a third of enrolled patients fail to receive product.

An allogeneic therapy also makes retreatment easy, and five subjects in Alpha were thus retreated on progression: four achieved complete and one a partial remission. And as for Mr Chang’s boast about durability – a problem for ALLO-501 under its incarnation as Cellectis’s UCART19 – 29% of complete responders were still in remission at six months. 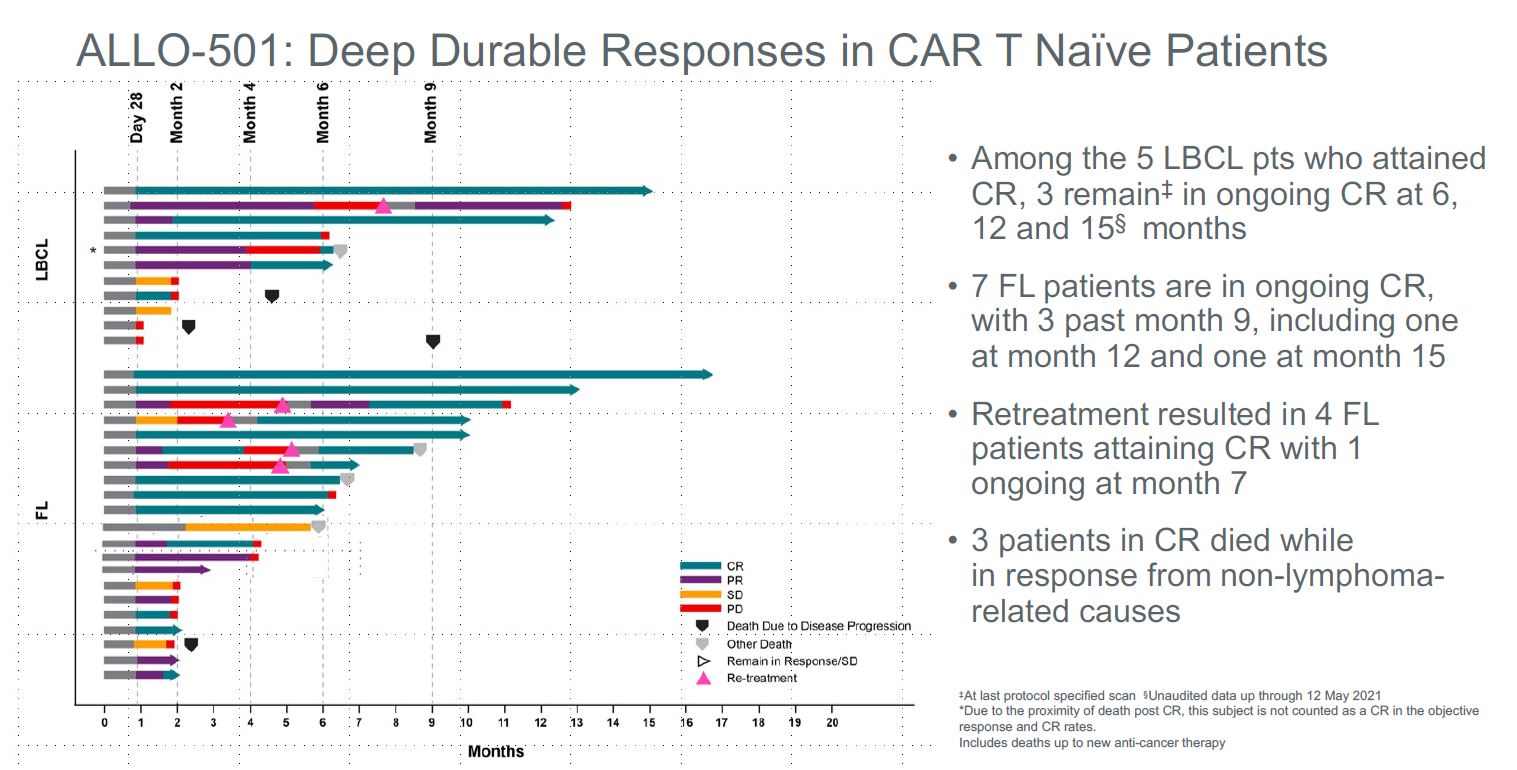 Of course, the allogeneic CD19 Car that Allogene wants to launch is not ALLO-501 but ALLO-501A, which uses an identical Car construct but dispenses with ALLO-501’s Rituxan-induced “safety switch”, which could impair efficacy in lymphoma patients, many of whom receive Rituxan as an early treatment.

It was initial ALLO-501A data, from the phase 1 portion of the Alpha-2 study, that feature at Asco, but whose abstract relates to a relatively old, January 15, data cutoff and appears to show a 20% response rate.

Yesterday Allogene gave unaudited data up to May 12, showing five responses, all complete, among nine lymphoma subjects, including some who had relapsed on autologous Car-T therapy, and one of whom had been retreated. Among 13 patients evaluable for safety there were two grade 3 or higher events: one CRS and one infection.

The next stage of developing potentially the world’s first off-the-shelf Car-T product will be to start a pivotal phase 2 portion of Alpha-2, by the end of the year. And if yesterday’s data are still short of a knockout blow for allogeneic cell therapy they are at least signs of progress being made at long last.

Allogene raises the spectre of a Car-T nightmare