The company reports decent data with its Oxbryta follow-on, but still has much to prove.

Global Blood Therapeutics believes that it has taken a step towards an oral functional cure for sickle cell disease, with encouraging but early data presented at Ash today with its Oxbryta follow-on GBT021601. Investors were less certain about what to make of the results: the group’s stock fell as much as 9% this morning, but ended the day up 5%.

The company met its target of showing haemoglobin modification of 30-40% with daily dosing of ‘601 in six sickle cell patients, and has room to dose higher. However, results were variable between patients, and reports of several vaso-occlusive crises during therapy also raised concerns.

During a conference call today Global Blood’s chief executive, Ted Love, countered that reading too much into the VOCs seen, given the small number of patients and the short duration of the study, “borders on the ridiculous”.

He added that the group would not expect to see an immediate impact on VOCs with ‘601, but that this should improve over time.

Still, the company's first-generation sickle haemoglobin (HbS) polymerisation inhibitor, Oxbryta, did not significantly decrease VOCs in the pivotal Hope study. Instead, the product received accelerated approval on the basis of an increase in haemoglobin levels, a surrogate endpoint. And Global Blood’s confirmatory study of Oxbryta does not evaluate VOCs, but instead has transcranial doppler (TCD) flow velocity – an indicator of a patient’s risk of stroke – as its primary endpoint.

Therefore, until ‘601 can show a benefit on VOCs, doubts are likely to remain.

The next-gen project works similarly to Oxbryta but is designed to be more potent – something backed up by the data presented today.

Oxbryta is dosed at 1,500mg/day, while the multiple-ascending dose portion of the phase 1 trial tested ‘601 at 50mg and 100mg daily, following a loading dose. The sickle cell patients received the 50mg/day dose for five weeks before moving to 100mg/day for three weeks.

At the end of the trial, the mean haemoglobin occupancy rate was 32.6%; occupancy has been shown to correlate with modification. There was also a mean 2.3g/dl increase in haemoglobin.

By contrast, Oxbryta has led to haemoglobin modification of around 26%, and a haemoglobin increase of 1.1g/dl.

On the latter measure, ‘601 also looks better than some potential oral rivals, albeit on the basis of cross-trial comparisons: Agios’s mitapivat and Forma’s etavopivat have been shown to increase haemoglobin by 1.2g/dl and 1.5g/dl respectively.

However, the ‘601 study found a great deal of variability between patients. Perhaps a larger study will make the trends clearer.

Global Blood plans to start a phase 2 trial of ‘601 in the first half of next year, but is not giving any more details for now.

On dosing, a spokesperson told Evaluate Vantage: “We haven’t determined the dose for the next study yet, but we’ve said we will study higher doses than 100mg but still significantly lower than Oxbryta. The data today suggest that we can achieve even higher occupancy at daily doses well under 500mg.” 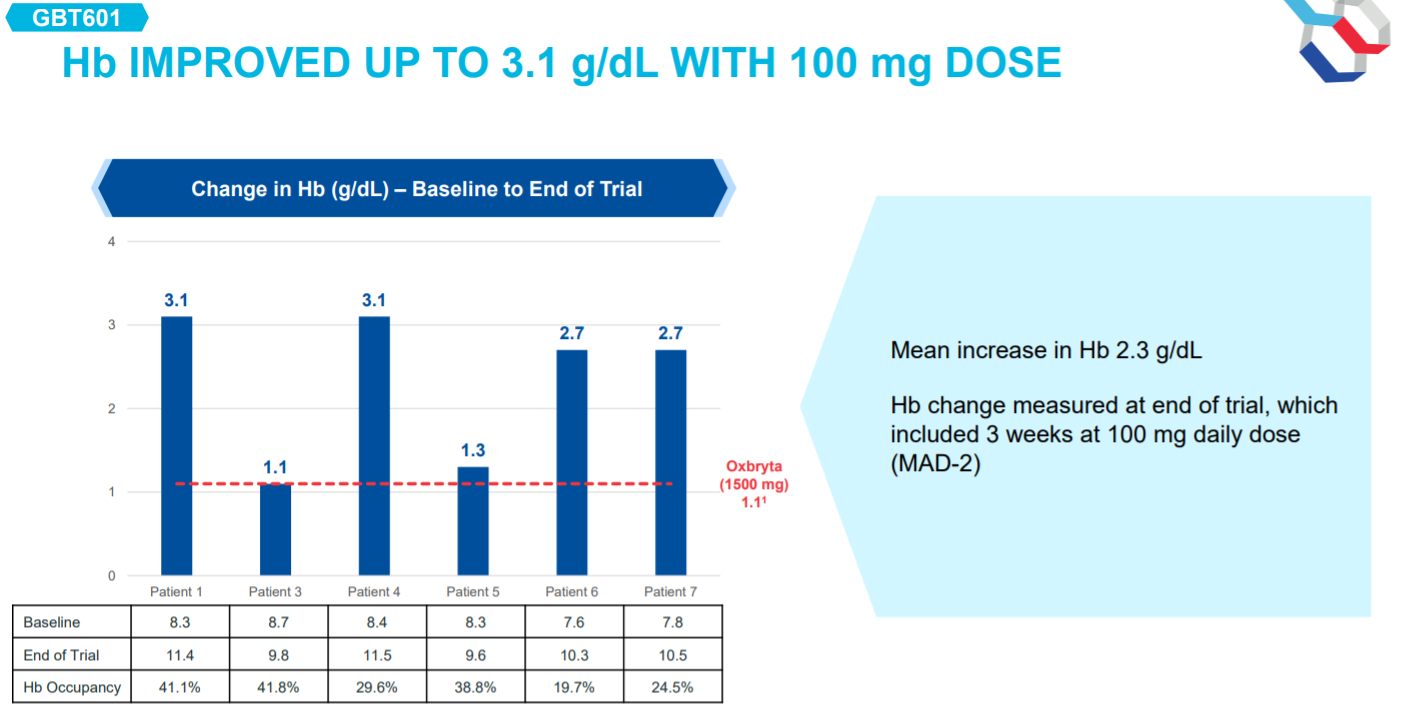