Like its two competitors Precision shows lack of durability with its allogeneic Car-T approach, but makes a quick move to next-gen assets.

As Precision Biosciences is the third of three players with relatively advanced allogeneic Car-T projects, some investors were looking to its Ash presentation yesterday for signs that this type of therapy is, after all, ready for prime time.

Unfortunately they got no such reassurance, with a lymphoma trial of PBCAR0191 showing that most remitting patients relapse within six months – echoing earlier disappointments with corresponding CD19-directed Cars from Allogene and Crispr. Precision’s plan now is to focus PBCAR0191 on Car-relapsed patients while looking to a next-generation asset, PBCAR19B, in the broader population.

This might come as a disappointment to some, who will read this as Precision abandoning PBCAR0191, its lead asset. Their fears will be reinforced by Precision separately admitting yesterday that PBCAR269A, a BCMA-targeting Car for multiply myeloma, was “not comparable with autologous Car-T” in efficacy terms.

That said, the company should be congratulated for moving quickly to remedy the situation. In CD19-expressing disease the next-gen PBCAR19B has already begun phase 1 at its first dose level, and the company hopes to present data in mid-2022.

PBCAR19B is a similar allogeneic project to PBCAR0191, but additionally expresses an anti-β2M shRNA, which the company hopes will help it evade rejection by the host’s T cells, and an HLA-E transgene to prevent rejection by NK cells. A similar “stealth” Car, PBCAR269B, is in development targeting BCMA but is still in preclinical trials.

As far as the first-generation PBCAR0191 goes, the omens are not good. Precision’s Ash presentation yesterday showed a 71% overall remission rate among 17 evaluable heavily pretreated lymphoma subjects. By six months, however, eight of the 12 responders had relapsed; of the other four, three were ongoing, one after transplant and one at very short duration, while the fourth relapsed at around nine months.

Though the company highlighted relatively good safety in terms of cytokine release and neurotoxicity, there were eight infections in the lymphoma cohort; three led to deaths, one of which was deemed potentially related to PBCAR0191.

Lack of durability is nothing new in allogeneic Car-T, which as a therapy approach has moved painfully slowly through clinical development. In October Crispr trumpeted a 58% ORR among 24 subjects given 100 million CTX110 cells, but by around six months all but three initial responders had relapsed, including an earlier disclosed death.

Unlike Precision, Crispr allowed the redosing of some relapsed patients with CTX110, though questions remain about the viability of such an approach. Allogene had similarly played up redosing in its study of ALLO-501, but now faces much bigger problems, with its entire pipeline on clinical hold after signs of chromosomal abnormalities.

All that said, Precision is not giving up on PBCAR0191. On an investor call yesterday the group pointed to a small cohort of six patients with lymphoma or leukaemia who had been given PBCAR0191 after relapsing on an autologous CD19-directed Car, but who were still CD19-positive.

All six went into remission, and though half again relapsed at least two responses were longer than those achieved with the autologous therapy. On this basis the group said this Car-relapsed salvage population could be “uniquely suited” to treatment with an allogeneic product.

In contrast, Allogene’s Asco update of ALLO-501 data focused on a Car-naive lymphoma population. Precision’s view could be backed by the fact that patients relapsing to autologous Car-T therapy often have relatively unfit T cells – a problem an allogeneic product might be able to overcome.

Precision must now prove this in a larger setting, as well as demonstrating the clinical benefit of its next-generation approach next year. Until then Crispr and Allogene will cast rather long shadows. 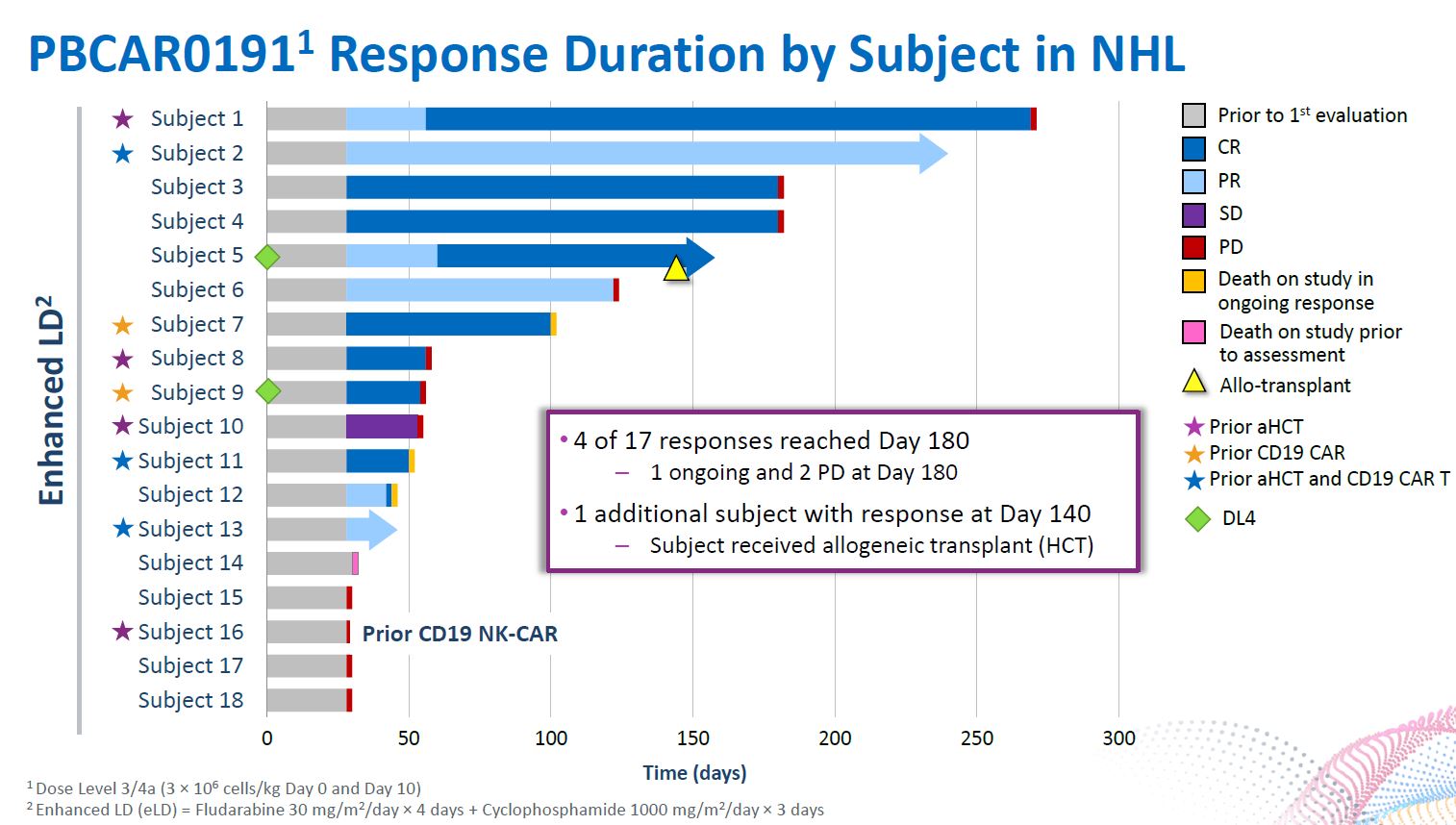