ESC 2018 – Pfizer impresses with tafamidis, but amyloidosis battle goes on

Pfizer eyes tafamidis approval in cardiac amyloidosis, but things could have been worse for its rivals, Alnylam and Ionis.

Pfizer looks like it might soon have a candidate on the market for the cardiac form of amyloidosis. Full data from the Attr-act study of tafamidis, presented today at the European Society of Cardiology congress, found impressive reductions on both components of the primary endpoint, death and cardiovascular hospitalisation.

But a closer look at the data reveals reasons to be cautious about tafamidis, including a lack of dose response and a relatively slow onset of action, which could hand the advantage back to Pfizer’s amyloidosis rivals, Alnylam and Ionis.

Still, Pfizer will be celebrating data that should help it “own” the cardiac amyloidosis space in the near term, according to Stifel analysts.

One worry before the ESC presentation was that the benefit on the primary endpoint of the Attr-act trial, a composite of all-cause mortality and cardiovascular-related hospitalisation at 30 months, had been driven by a reduction in hospitalisations rather than deaths (ESC 2018 preview – Getting to the heart of Pfizer’s amyloidosis data, August 20, 2018).

The full data showed that this was not the case, with Attr-act finding a 30% reduction in the risk of mortality and 32% reduction in the rate of cardiovascular-related hospitalisation with tafamidis. This means that the trial exceeded the 25% threshold set as a marker of success by Evercore ISI analysts before the ESC meeting.

Tafamidis’s performance was similar in mutant and wild-type disease, suggesting that it could be approved in both subtypes, and assuaging fears that the benefit might have been driven by wild-type patients.

However, things did not all go Pfizer’s way. A close look at the primary endpoint data revealed a very wide confidence interval for the mortality endpoint, with the upper bound of 0.96 coming uncomfortably close to 1.00. This could reduce confidence in the conclusion. 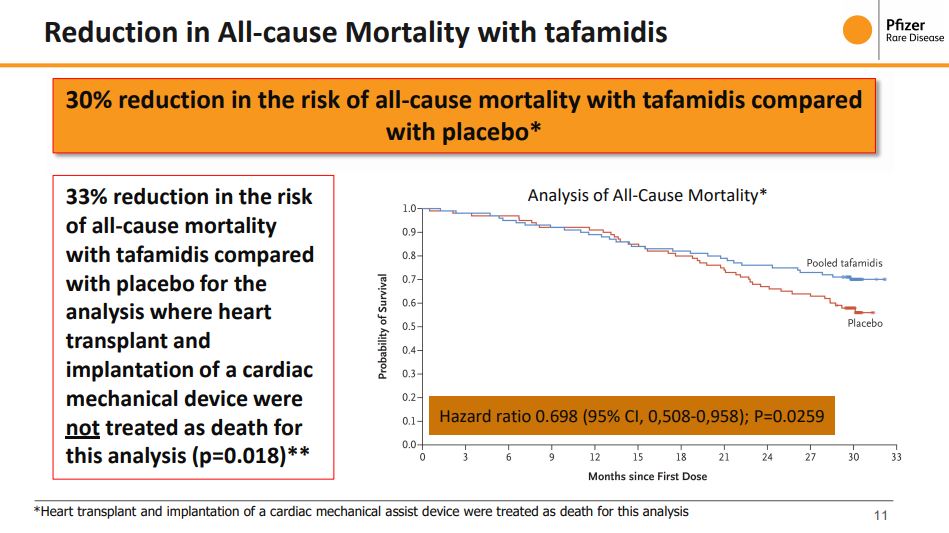 The lead investigator, Dr Claudio Rapezzi, of the University of Bologna, brushed off any concerns about this during a press conference at the ESC meeting. He admitted that the confidence intervals were “relatively large, but below 1.0”.

In Pfizer’s defence of this point, Brenda Cooperstone, chief development officer of the group’s rare disease division, told Vantage on the sidelines of the conference: “The primary endpoint was highly statistically significant, with a p value of 0.0006 – I think those results are telling.”

While the Stifel analysts concluded that the Attr-act data were “outstanding”, they added that tafamidis’s slow onset of action, plus a lack of dose response, left the way clear for TTR knockdown drugs like Alnylam’s Onpattro and Ionis’s Tegsedi to eventually emerge as the amyloidosis winners.

Onpattro is approved in the US for polyneuropathy in adults with hereditary transthyretin amyloidosis, while Tegsedi has European approval in this indication, and is awaiting a decision from the FDA by early October. Meanwhile, tafamidis, an oral transthyretin stabiliser, is available in Europe for polyneuropathy at a 20mg dose, but was knocked back in this indication by the FDA on lacklustre data.

For now, Pfizer plans to file tafamidis with the FDA in the separate cardiomyopathy indication first “and then have the discussion with the neurology division about the best path forward for polyneuropathy”, Ms Cooperstone told Vantage.

She would not be drawn on whether another trial might be needed in polyneuropathy.

And Ms Cooperstone would not say which dose Pfizer would take forward, saying this also depended on discussions with regulators. Attr-act tested both 20mg and 80mg – analysts had hoped to see an increased response with the 80mg dose, but this did not emerge, suggesting that Pfizer might end up focusing on the 20mg dose.

The fact that this dose has fallen short in polyneuropathy before could therefore help Alnylam and Ionis’s chances of staying ahead in this indication. Similarly, tafamidis’s slow onset of action versus Onpattro could also be good news for Alnylam, since Onpattro goes to work more quickly, the Stifel analysts noted.

Even so, Pfizer could soon have the only approved therapy for the cardiomyopathy amyloidosis subtype – which Alnylam tried, and failed, to get on Onpattro’s label.

The Attr-act results do not represent the worst-case scenario for Alnylam. But the prospect of a new amyloidosis competitor can hardly be seen as great news either.

This article has been updated to reflect the approval status of Onpattro and Tegsedi.