A high dose of AXO-AAV-GM1 impresses, but small patient numbers provide a reason for caution.

Sio Gene Therapies had already reported decent results with a low dose of AXO-AAV-GM1, its gene therapy candidate for the rare inherited disease GM1 gangliosidosis. Now it has posted even more impressive data with a high dose of the project.

However, the high-dose results come from just two patients, and mainly concern biomarkers. Sio will need to replicate its findings in more patients, and might need more data on harder endpoints to satisfy regulators.

Still, Sio believes that it will only need to enrol around a dozen patients in the next stage of the same phase 1/2 trial to allow a filing with the FDA, the group’s chief executive officer, Pavan Cheruvu, tells Evaluate Vantage – although that still needs to be agreed with the agency.

GM1 gangliosidosis is a lysosomal storage disorder caused by mutations in the GLB1 gene, leading to low or no activity of the enzyme beta-galactosidase. This enzyme usually breaks down molecules called gangliosides; in the disease these build up, causing symptoms such as neurodegeneration.

There is a spectrum of disease, and Sio (formerly known as Axovant) is focused on type 1, the most severe, and type 2, the so-called juvenile form. There are no approved therapies for the disease, and type 1 patients typically die before the age of two.

The latest efficacy data with AXO-AAV-GM1, presented at the European Society of Gene & Cell Therapy today, concern seven type 2 patients dosed in the first stage of an NIH-sponsored single-arm phase 1/2 study. AXO-AAV-GM1 was given intravenously at 1.5x1013vg/kg, or 4.5x1013vg/kg.

It has previously been mooted that, if a therapy could restore beta-gal activity to 50% of normal or more, this would be a good result (A three way battle beckons in GM1 gangliosidosis, February 23, 2021).

The low dose of AXO-AAV-GM1 has already produced results not far off this goal, with Sio previously reporting beta-gal activity of 23-57% of the lower limit of normal at six months.

Now the high dose has blown this out of the water, albeit with just the two-patient data. At six months the subjects had a 12 and 17-fold increase in beta-gal levels from baseline, taking them into the normal range. 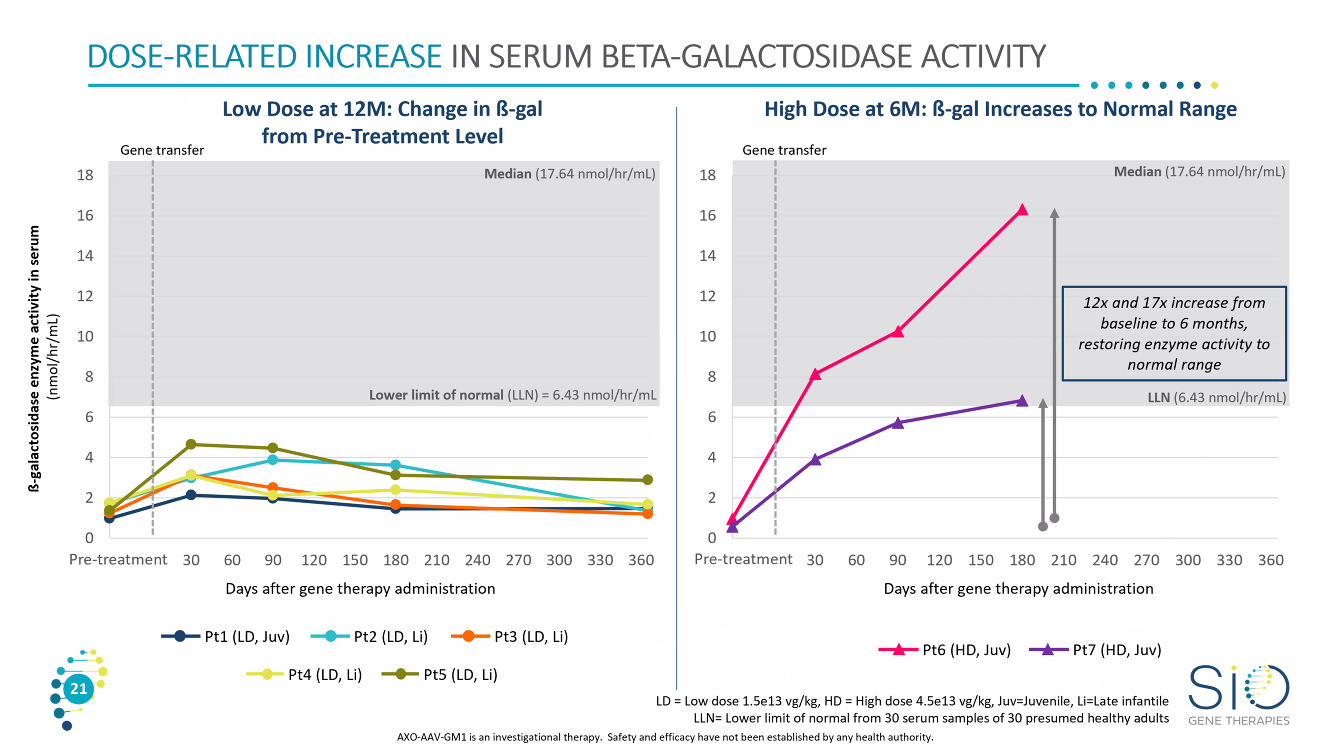 Importantly, there was also a reduction in these patients’ levels of toxic GM1 ganglioside, again to within the normal range.

In the low-dose cohort, GM1 ganglioside also decreased from baseline to 12 months, but levels did not reach normal here and Mr Cheruvu describes this impact as modest.

In addition, some patients saw their levels of GM1 ganglioside creep up between six months and two years after dosing, raising questions about the durability of AXO-AAV-GM1’s effects. This is always an important consideration for gene therapies, and will remain a focus with this project. 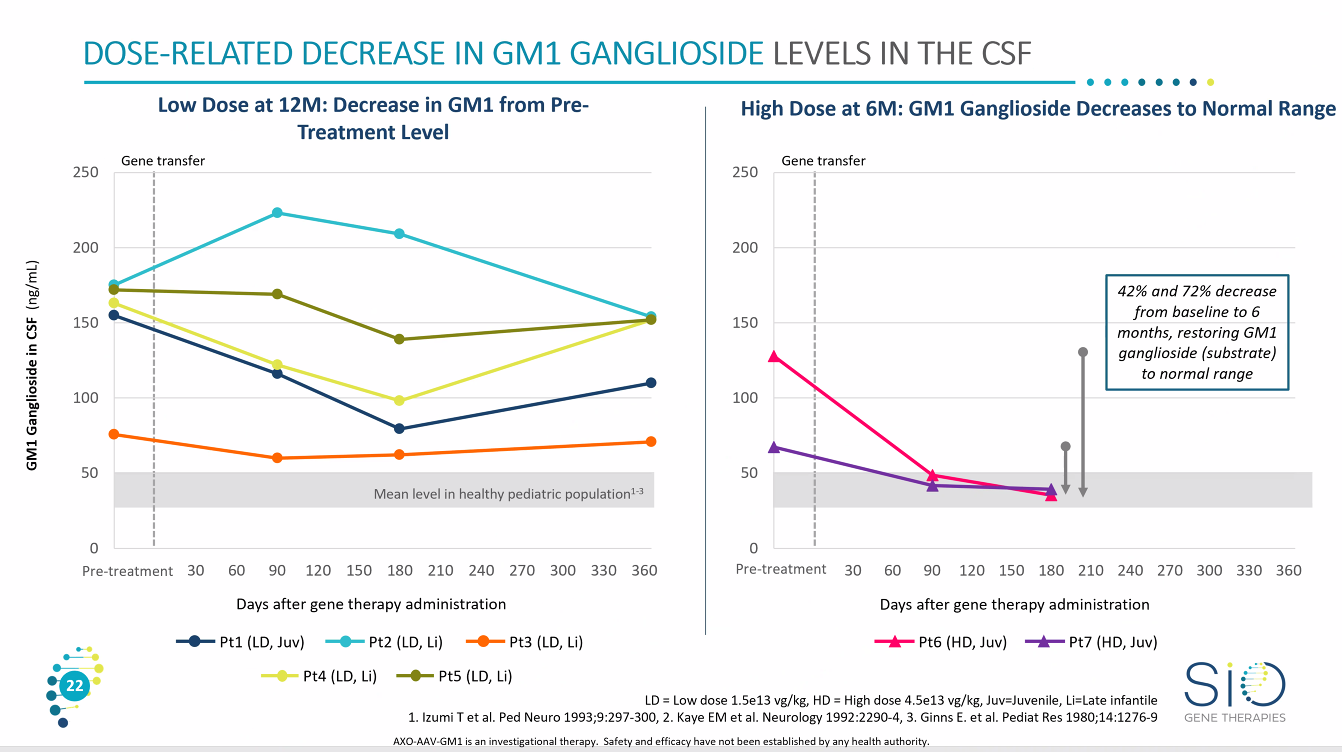 One of the low-dose subjects showed clinical worsening, although Mr Cheruvu notes that this patient had more advanced disease at baseline than the other participants, and that treatment might have come too late.

In any case, it looks like the 4.5x1013vg/kg dose is the one Sio will take forward in stage two of this trial. Mr Cheruvu says the dose will stay under the 1x1014vg/kg threshold that has been linked with toxicity issues with some other gene therapies.

As for the safety profile of AXO-AAV-GM1 so far, five out of five low-dose patients had treatment-emergent anaemia, while several cases of liver enzyme elevations were deemed possibly related to therapy. Sio pointed out that no liver-related adverse events needed clinical intervention.

Liver enzyme elevations are fairly common with gene therapies, with many developers using prophylactic steroids to combat these effects. It is worth noting that in the AXO-AAV-GM1 study patients were on a stringent immunosuppressive regimen.

Perhaps this regimen will be acceptable in a severe disease like GM1 gangliosidosis. That will soon be up to the FDA, which Sio plans to meet in the first half of next year to discuss stage two of this trial; the group hopes to use data from both stages to support regulatory filings.

Mr Cheruvu hopes that a combination of clinical outcome measures, such as the Vineland-3 score, plus biomarkers will be enough to satisfy the FDA.

More data from stage one of the trial will also be available next year, including the first results with more severe type 1 patients.

For now, Sio is ahead of its GM1 rivals. Passage Bio’s PBGM01 will yield one-month data this quarter, while the first patient was dosed with Lysogene’s LYS-GM101 in June.