Abbvie has finally scored a win with its Parp inhibitor, but the product will struggle to make headway – assuming it will even be filed.

After years of trying – and mostly failing – Abbvie has finally delivered a phase III hit with its Parp inhibitor veliparib. The Esmo cancer conference heard that the project had contributed to a significant extension in progression-free survival in front-line ovarian cancer patients in the Velia trial, one of three successful Parp studies in this setting unveiled in Barcelona today.

However while the trial was technically a success, its real-world impact could well be limited. This is largely down to the design of the study, which tested a sequence of therapy unlikely to be widely adopted. This also makes it hard to stack veliparib up against more established Parp inhibitors, Lynparza and Zejula.

With the Paola-1 and Prima studies respectively confirming these two agents’ utility in a broad front-line maintenance setting, Abbvie would have to work hard to carve out a niche in this very competitive market. This assumes that the project is actually going further: Abbvie has yet to confirm when and if veliparib will be filed.

The company told Vantage that this eventuality was still being explored; the sellside are largely ignoring the project, probably because of the previous late-stage failures and protracted development time. A phase III trial in breast cancer, Brocade-3, reports tomorrow, and the strength of that data could help answer the question of Abbvie’s commitment here. 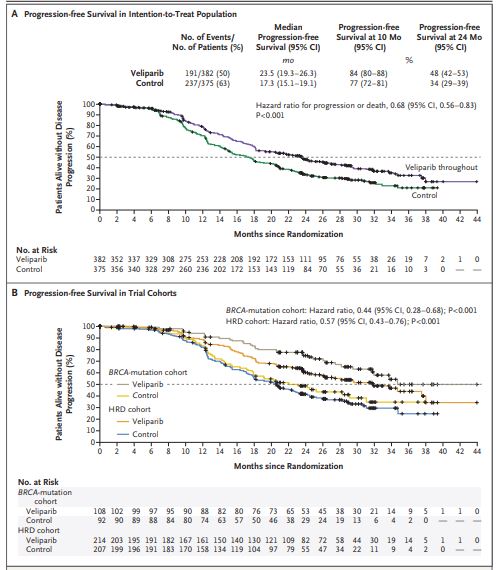 The Velia results are far from poor: all three cuts of the data by patients’ mutation status hit statistical significance, showing a reduction in the risk of progression. As expected the response was much more marked in subjects with a BRCA mutation.

But the data are hard to compare with the other front-line studies because Velia was examining the role of Parp inhibition in the induction phase of treatment for newly diagnosed ovarian cancer. Typically, these patients receive front-line platinum chemo; the Solo-1 trial of Lynparza, unveiled at Esmo last year, showed a dramatic improvement in PFS when that Parp inhibitor was used as a maintenance therapy in BRCA-positive patients.

Velia has a “true all-comers population”, Abbvie contends, and the trial was not limited to patients who responded to chemotherapy, as with conventional maintenance.

At the time of this data analysis, formal testing of the veliparib combination arm versus control had not been conducted, but the early results are not encouraging, with hazard ratios all above 1.0. This suggests that the benefit of veliparib is almost all down to the maintenance phase, something that the other front-line trials support. However, Velia fails to confirm this properly.

“There was a concern about toxicity from earlier studies in combining chemotherapy with a Parp inhibitor – but, if you don’t need to combine, why would you combine?,” asked Dr Susana Banerjee of the UK’s Royal Marsden Hospital.

Two other major studies today showed that significant survival advantages can be achieved with the exact regimen that Abbvie failed to include in this trial. It is hard to see where veliparib goes from here.