The company is one of very few to have studied combining PD-1 and PD-L1 blockade, an approach still in need of scientific validation.

Is there any logic to combining a PD-1 inhibitor with one blocking its ligand PD-L1? Beigene thinks so, based on a small, low-profile study presented over the weekend at the Esmo conference, though the limited precedent from other industry players suggests that the jury is still out.

Only Astrazeneca is thought also to have run human studies of such a combo, but the anti-PD-1 element of this, MEDI0680, is now discontinued, as is Bristol Myers Squibb’s anti-PD-L1 BMS-936559. Immunotherapy companies have picked either one target or the other, and Esmo experts could offer little insight into a combo’s mechanistic rationale.

But this has not stopped Beigene, which after concluding phase I dose escalation and confirmation is now in phase II with its combo of tislelizumab, the anti-PD-1 that it sells in China as Baizean, and BGB-A333, an anti-PD-L1. Data from a second-line urothelial cancer cohort of a solid tumour study were presented at Esmo by the Catalan Institute of Oncology’s Dr Juan Martin-Liberal. 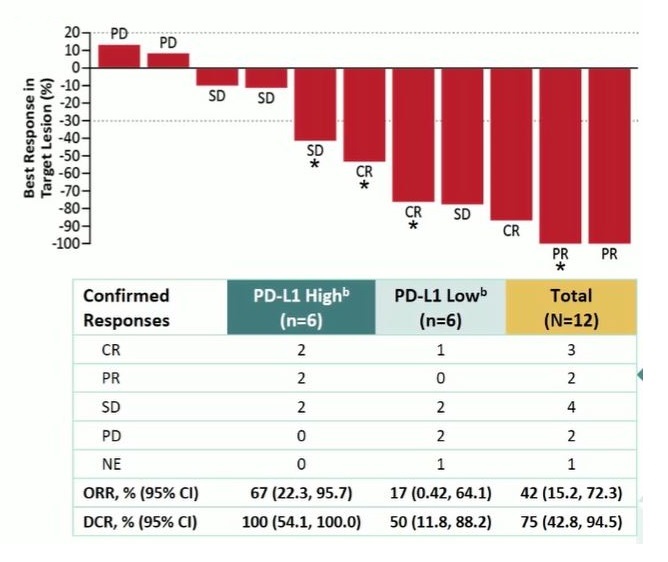 The headline efficacy numbers showed Beigene’s combo to yield a 42% confirmed remission rate among 12 subjects, including two partial and two complete responses among six ≥25% PD-L1 expressers. Median duration of response in the single-arm study was 9.1 months.

The lack of a control mean that investors have to look cautiously across rival trials for a comparison. Here ORRs range from 13% for Merck KGaA/Pfizer’s Bavencio to 24% for Roche’s Tecentriq – in much larger trials – and including a 28% ORR among PD-L1-high subjects given Tecentriq.

Rightfully, given the very small Beigene study, Dr Martin-Liberal’s enthusiasm stopped at the cautious conclusion that the data “provided insights” into the PD-1/PD-L1 combo. The study discussant, the University of Copenhagen’s Dr Ulrik Lassen, praised the 67% remission rate in PD-L1-high patients.

However, Dr Lassen offered little in the way of mechanistic rationale, only discussing the logic behind combining PD-(L)1 with CTLA-4 or Lag-3 inhibition. PD-1 is known to bind to PD-L2 as well as PD-L1, but this only hints that one approach might be better than the other, rather than backing a combination.

Previous studies have found little positive. Bristol is thought to have canned BMS-936559 without studying an Opdivo combo, but Astra did run trials of MEDI0680 plus Imfinzi, which it hypothesised offered “the potential for complete PD-1/PD-L1 axis inhibition”.

However, the data, last updated at Esmo last year, did not bear this out. Among 42 renal cell carcinoma subjects there were only two complete and four partial responses, with two of the latter unconfirmed; there was no difference between PD-L1 expressing and non-expressing subjects, and more patients dropped out because of adverse events in the combo versus monotherapy cohorts.

Again with the caveat of small patient numbers, the Beigene study saw no increase in severe treatment-related adverse events between its monotherapy dose-escalation and dose-expansion combo parts.

For followers of this space there is one other asset to watch: Lilly’s LY3434172. This is an anti-PD-1 x PD-L1 bispecific antibody, and has been in a phase I study for over a year, but no clinical data seem to have been presented yet.

A preclinical paper published this month in Cancer Immunology Research suggested that LY3434172 had demonstrated its “enhanced immunomodulatory properties”. Human data with LY3434172, and an update on Beigene’s combo strategy, are keenly awaited.