Worries over toxicity with Pfizer's PF-06939926 halts trial dosing and could leave the way clear for its DMD rival Sarepta.

Any Sarepta investors fretting about data with Pfizer’s Duchenne muscular dystrophy candidate needn’t have worried. Unimpressive efficacy plus a toxicity signal leading to PF-06939926's study being halted have helped Sarepta’s SRP-9001 keep its place as the DMD gene therapy to beat, and the smaller company’s stock shot up 17% on Friday.

The early data with PF-06939926 might not be disastrous for Pfizer, which plans to push into a phase III trial in the first half of 2020. And, with only a handful of DMD patients having been treated so far with gene therapies, there is still plenty to play for.

But if toxicity issues continue they could hit PF-06939926’s chances of approval. Of the six patients treated with the therapy so far in a phase I trial, two were hospitalised, attendees at the Parent Project Muscular Dystrophy (PPMD) conference heard on Friday.

One of these cases did not seem too sinister: nausea and vomiting saw one patient admitted, but he was quickly discharged and Pfizer has now put in place protocol changes involving anti-emetics and fluid intake that it hopes will stop this from happening again.

More worrying was a case of acute kidney injury that required treatment with Alexion’s complement inhibitor Soliris; this was eventually resolved, but the development spurred Pfizer to halt dosing in the trial.

The issue could be down to an immune response to the vector being used, Pfizer speculated. PF-06939926, which Pfizer gained through its $193m takeover of Bamboo Therapeutics, employs an AAV9 vector to deliver a shortened version of the dystrophin gene that is affected in DMD patients.

Solid Biosciences’ DMD gene therapy candidate SGT-001 also uses an AAV9 vector, and has also been linked with activation of the complement system and worrying side effects.

Sarepta’s SRP-9001 uses a different vector, AAVrh74, which might explain why it has managed to sidestep these problems so far.

In any case, Pfizer believes that better monitoring could address the issue, and is awaiting the go-ahead to restart the trial.

But, even without the toxicity concerns, PF-06939926 so far looks not as effective as SRP-9001, although caveats include the small number of patients treated with either therapy, as well as the usual issues with cross-trial comparisons.

Stacking the therapies up against each other has been complicated further by yet another measure that has been used to measure microdystrophin levels in patients’ muscles, a marker that the therapy should be working as intended.

Pfizer’s trial used a liquid chromatography mass spectrometry assay that the company claims is more sensitive and less variable than Western blot, the measure Sarepta has been using.

SRP-9001, meanwhile, led to microdystrophin expression levels of 74-96% at three months in four patients, depending on the Western blot analysis used.

Sarepta has already begun a 24-patient placebo-controlled trial of SRP-9001, with data due next year. There is still a long way to go in the Duchenne gene therapy chase, but Pfizer now looks like it has an even harder task to catch up with its smaller rival. 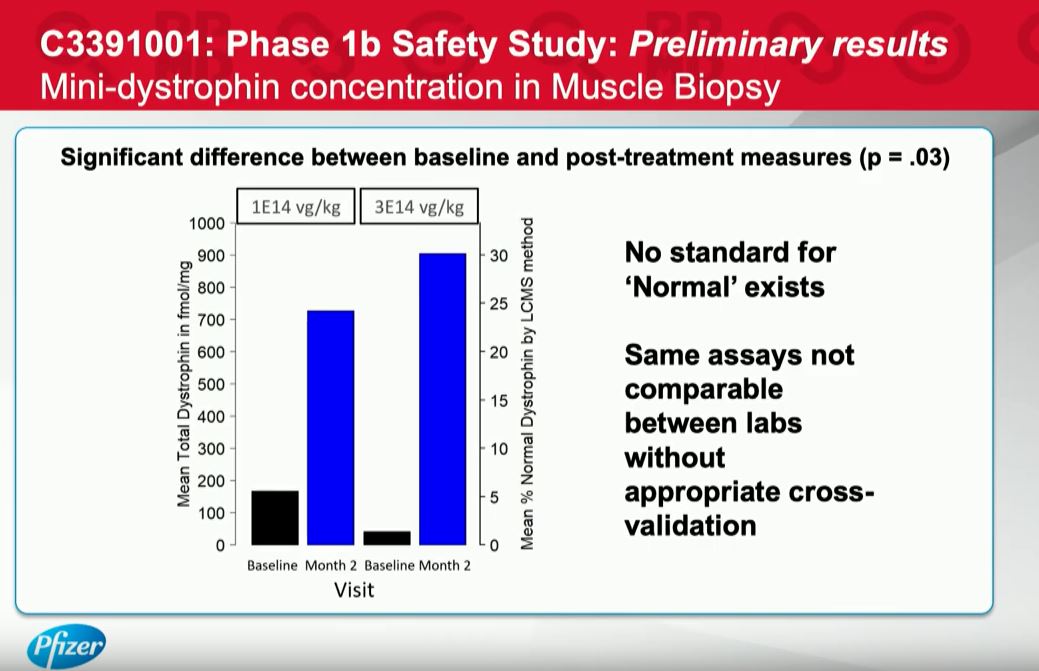