Transcatheter technologies could be the future – but a distant one.

There are four valves in the heart, and two of them can be replaced reasonably easily with catheter-mounted prostheses. The other two, the mitral and tricuspid valves, are harder to reach non-surgically, and efforts to develop transcatheter devices in these niches have not yet reached fruition.

Nevertheless, several companies are toiling hard to make these technologies a reality. Medtronic and Edwards Lifesciences are conducting pivotal studies of a mitral valve and a tricuspid prosthesis respectively, and data from early feasibility trials of these devices, reported over the weekend, look encouraging.

First, Medtronic. The company’s Intrepid mitral valve, obtained via its acquisition of Twelve in 2015, is in a pivotal trial called Apollo, but this has been delayed by Covid-19 (The crucial trials Medtronic has had to pause, May 1, 2020). Apollo was initially expected to report this year, but its clinicaltrials.gov record now gives a primary completion date of October 2023.

There could be another reason for the delay. Previously Apollo had tested the Intrepid valve when delivered via the transapical route, which involves the creation of a hole in the myocardium and is associated with complications including myocardial injury, ventricular arrhythmias and bleeding. It will now allow the valve to be delivered transfemorally, after data presented at the TCT meeting on Saturday from a separate feasibility trial showed that this route was safe.

The TCT data come from the first 15 patients treated with transfemorally delivered Intrepid valves. All had severe, symptomatic mitral valve regurgitation. At 30 days survival was 100%, with no cases of stroke and no, or trace, regurgitation. Median procedure time was 46 minutes.

Patients’ heart failure improved significantly too: at baseline 67% had New York Heart Association class three or four heart failure – four being the most severe. At 30 days this had shrank to 7%. However, seven patients had major bleeding events, six of which were access-site related haematomas. 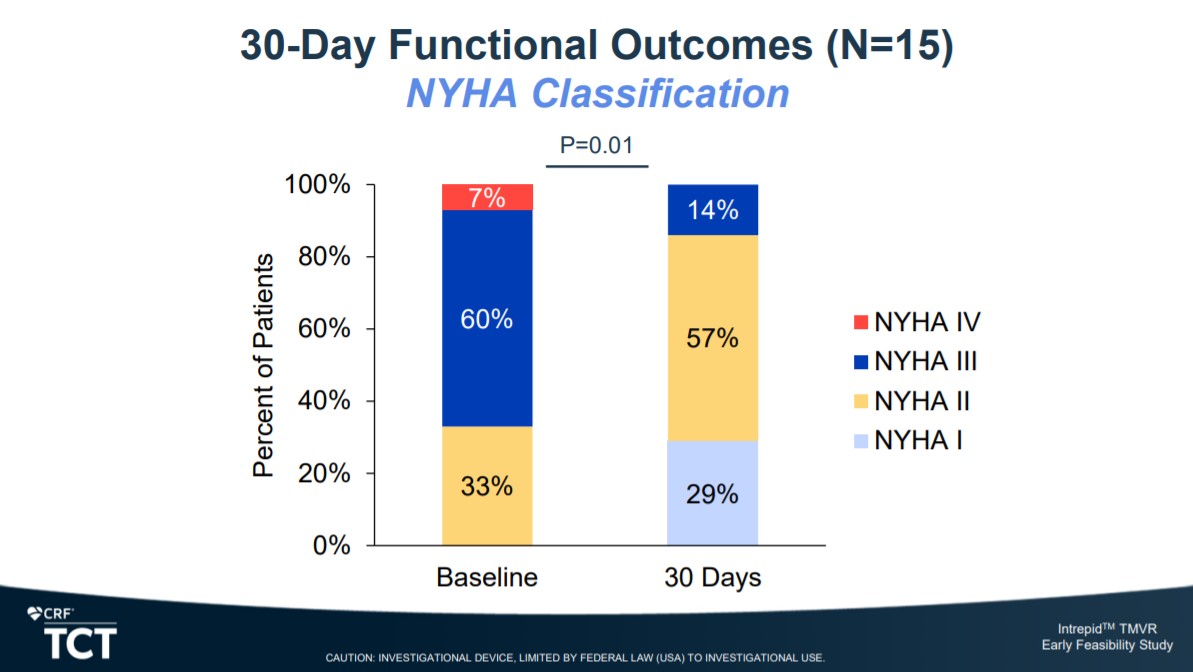 When, in 2018, the same feasibility trial yielded data on transapically delivered Intrepid, survival was 86% at 30 days, and 4% of the patients had a stroke. Median procedure time was an hour and 40 minutes.

The transfemoral delivery route is not perfect either, of course, as it too involves making a hole in heart muscle, this time in the septum separating the two atria. But so far the data seem to favour the new route.

At baseline 67% of patients had NYHA class three or four heart failure. Six months after implantation of an Evoque only 11% were in these classes.

Evoque’s pivotal trial, Triscend II, is already under way, though it is not expected to report for another three years.

While these trials are designed to answer the question of whether Evoque and Intrepid work well enough, and are safe enough, to be approved, there is another issue that will have to be addressed before the size of the market for these products can be estimated.

Devices to repair rather than replace damaged valves, such as Abbott’s MitraClip and TriClip, are already approved in some countries. Future research will have to settle the question of which patients can be effectively treated with repair, and which need to undergo the more burdensome valve replacement. With pivotal data on Intrepid and Evoque not coming for some years, at least there will be ample time to investigate this point.