Biopharma IPOs dipped in the opening months of 2019, but numbers look fairly healthy despite January's US government closure.

After a bumper crop of initial public offerings in 2018, this year was always going to look pale by comparison. But it is hard to make a call yet on whether a decline in flotations in the first quarter of 2019 is a reason for concern, or just a hangover from the US government shutdown.

It is encouraging that 10 companies managed to make their debut on the public markets during the first quarter despite the closure, which took out most of January. And the numbers look fairly healthy compared with other recent years except 2018, which looks like a clear outlier.

The analysis below includes developers of human therapeutics floating on Western stock exchanges and excludes, for example, medtech companies. It only covers first-time IPOs, so does not include a listing on Nasdaq by the French company Genfit, which already trades on the Paris exchange. 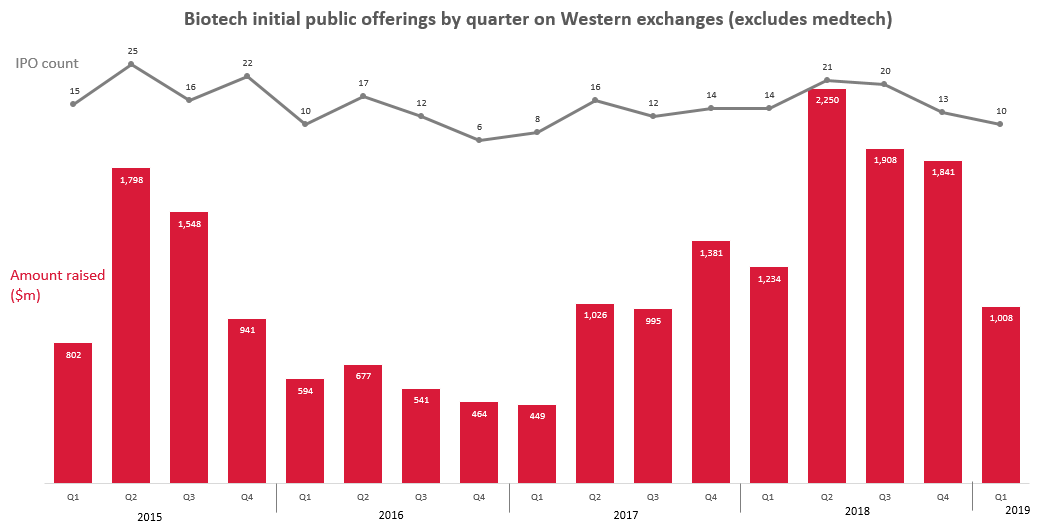 The first quarter is traditionally the quietest of the year, so there is plenty of scope for things to pick up in the rest of 2019, particularly with the spectre of another shutdown receding.

And after the stock market turbulence at the tail end of last year, biotech indices recovered in the first few months of 2019, which should bode well for new IPO hopefuls (US big biotechs lag in the opening quarter of the year, April 3, 2019).

However, there are signs that things could get tougher. In contrast to other recent quarters, none of the companies that went public during the first three months of 2019 was able to command a premium over its initially proposed price range; indeed, four had to price at a discount.

Overall, though, the average discount did not look out of the ordinary versus other recent quarters. 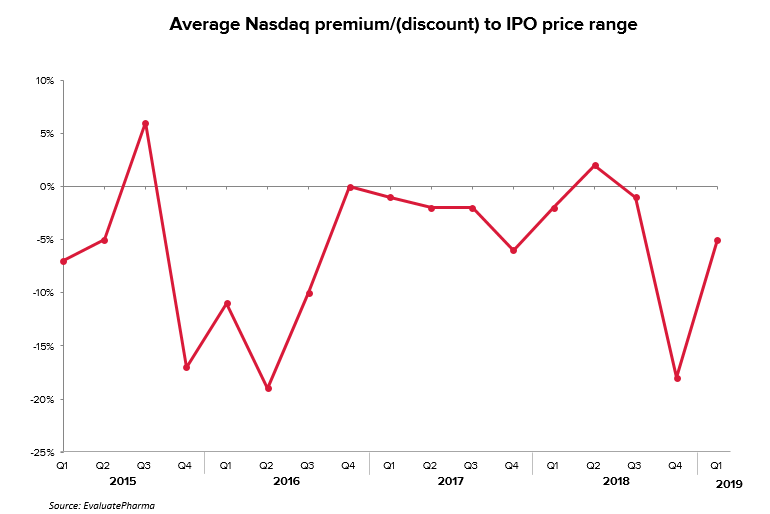 In another worrying omen for young companies hoping to make the jump from private to public, the performance so far of the class of Q1 2019 has been, on the whole, negative.

A handful of the newly public companies did manage to make gains across the quarter, including two cell therapy players, TCR2 and Precision Biosciences. This shows that the appetite for new assets in this space is still strong despite a disappointing commercial performance so far from first-generation CAR-T therapies.

However, neatly demonstrating the fact that these numbers represent only a snapshot in time, Precision’s share price is now over 20% lower than when it floated while another initial climber, Gossamer Bio, also faltered in April.

And there are still no signs of a public market entrance by Poseida, a cell therapy peer of TCR2 and Precision. Poseida announced plans to float in January, but has since gone quiet; meanwhile, the Nash specialist Cirius Therapeutics has also put its IPO plans on ice (EASL 2019 – Having filed to float, all Cirius needs now is the data, April 12, 2019). And last week the drug formulation developer Cure Pharmaceutical withdrew its $12m IPO.

Other IPO hopefuls will be watching for any more signs of a slowdown. Groups lining up to go public in April include the targeted cancer medicine specialist Turning Point Therapeutics and Hookipa Pharma, which aims to harness patients’ immune systems to treat cancer and infectious diseases.

Still, it is not all doom and gloom, with another Nash player, NGM Biopharmaceuticals, managing to raise $107m in its listing earlier this month. A bigger test of investors’ appetite for new issues could soon be approaching, with the mRNA player Biontech rumoured to be considering an $800m flotation late this year or early 2020.

The German group’s chances of going public will depend on the IPO window remaining open. It does not seem to be closing just yet – but the frothiness seen in 2018 looks to be a thing of the past.