With interest rates rising and developers focusing on favourite therapy areas, should hopes for mega-deals be reined in?

The $28bn that Horizon went for is undeniably a huge amount of money, but in the biopharma world this is still considered a bolt-on transaction. A relatively quiet couple of years for M&A shows that these tuck-in moves are exactly what large developers are focusing on.

The three transactions that emerged on day one of the JP Morgan healthcare conference fit this pattern. Rising interest rates will only make large deals harder to justify, even for companies flush with cash. Throw in the demerger trend that several big pharma names are following, and the chance of more megabuck deals happening any time soon dims even further.

This is despite a serious expansion in the sector’s financial ability to strike deals, at least according to EY’s calculations. Biopharma’s 25 largest companies have almost $1.5tn in available “firepower”, EY estimates in its annual M&A Firepower report, a figure that has grown substantially since 2020.

EY’s defines firepower as a company’s capacity to fund transactions, and calculates this using various inputs including cash, debt capacity and market cap. The pandemic will have contributed to this rise in spending potential, thanks to a surge in cash flow; at the same time several large cap groups have seen serious valuation hikes over the past few years, thanks to pipeline successes and investors’ flight to safety alike.

This expansion in firepower coincided with a market crash – but an expected uptick in deals never materialised. Total M&A spend last year only managed to reach 2021’s levels because of the Horizon deal, and both years are sitting way below the five-year average, according to Evaluate Pharma data.

“The M&A market does not like volatility, and we’ve seen volatility on many fronts in the last couple of years,” he says in an interview with Evaluate Vantage.

He points out that this “firepower” can also be deployed on other strategic initiatives, and it is certainly true that several majors are supporting substantial pipeline investment; Lilly, for example, is making a huge push with Mounjaro and its follow-on assets.

Deals are getting done, he maintains, when a company identifies a desirable asset. “We’re seeing more and more a focus on therapeutic areas. Valuation is an important driver, but the quality of the asset, the management and the clinical data are more important.”

The sector has moved away from mega mergers because it is incredibly hard to extract value from such huge business combinations, and executive teams have realised that investors value focused developers more highly – hence the various consumer healthcare and generic spinoffs that big pharma has undertaken.

“We think bolt-ons will continue to dominate the M&A scene in 2023 and beyond,” he says. 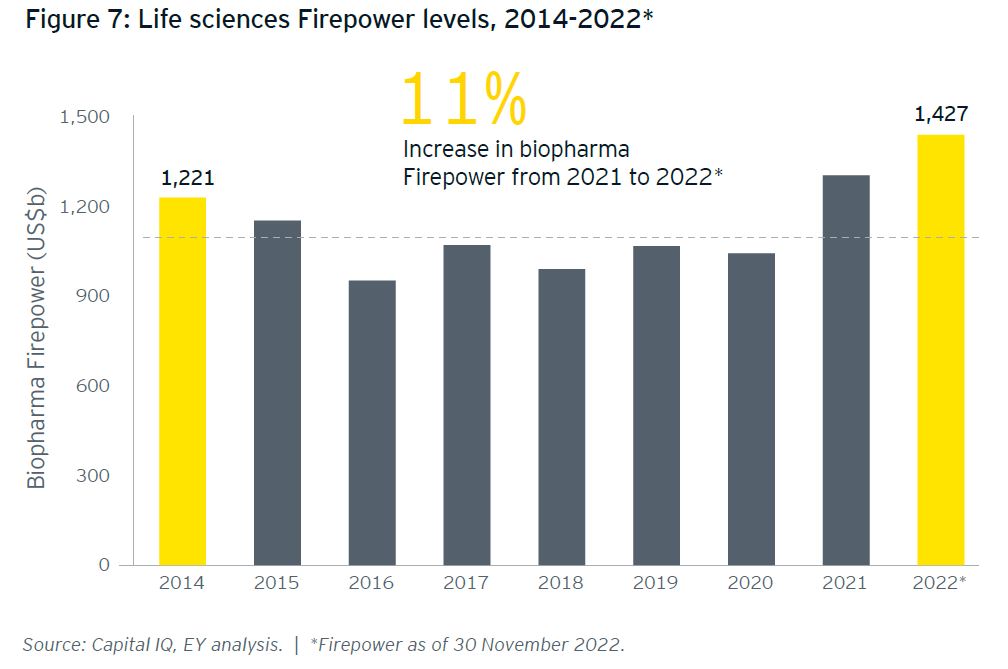 As Horizon showed, these bolt-ons can still amount to a lot of money. Even Astrazeneca’s $39bn move on Alexion should probably be described as a bolt-on, given that the target company was essentially based around a single franchise.

But these larger tuck-in transactions could get harder to strike in the coming years. The large-cap sector has substantial firepower, but these groups are not immune to the wider financial climate.

“These companies have their own IRR targets on these deals, and as borrowing rates go up the hurdles go up as well,” Mr Baral says. “Justifying $30-40bn isn’t easy in a climate where interest rates are rising and there is a recession uncertainty.”

“We expect 2023 to be an active year for deal making – maybe not straight M&A but collaborations and partnerships,” he says. “Watch for the bolt-ons, watch for the alliances – and never say never to the mega-merger.”

Bankers must bet Bayer cannot do more with less