Medtronic decides that Solitaire is best played with a partner.

While many medtech start-ups have their eyes on a trade sale as their ultimate goal, most would agree that a partnership with a big company is not to be sniffed at. And medtechs don’t come any bigger than Medtronic.

The world’s largest device maker is to sell Viz AI’s stroke identification software, which uses artificial intelligence to spot suspected large vessel occlusion strokes on CT scans, and automatically notify neurologists and surgeons. The deal makes sense for Medtronic, which makes a device, Solitaire, to treat these strokes, but could be a game-changer for Viz AI.

The patterns it recognises are large vessel occlusions (LVOs) – blockages in the large cerebral arteries that serve the brain – as displayed on CT images. This is combined with an app that the various stroke treatment specialists have on their mobile phones and tablets; when an LVO is detected the Viz software sends an alert including the images to the neurosurgeon and other specialists simultaneously, so they can prepare to treat the patient as soon as possible.

Though only between a quarter and a third of strokes are LVOs, they are the most severe type.

“We have two major arteries that supply the whole brain,” Mr Mansi says. “If one of these is blocked potentially half of the brain will die unless we remove that blockage. It’s the LVOs that are the ones causing major disability and leading to patients ending up in nursing homes.” 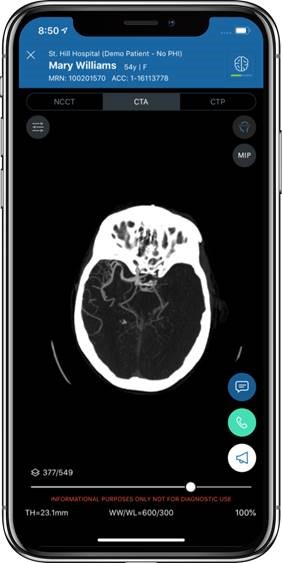 In a hospital that does not use Viz AI’s software, it takes a median of three to five hours to get a patient to treatment, Mr Mansi says, “and the average time’s much longer”. This is particularly galling because an effective treatment does exist – mechanical thrombectomy, a procedure to remove the clot from the blocked vessel, using devices such as Medtronic’s Solitaire.

“With Viz, in an FDA study in 300 patients we save an average of 52 minutes,” Mr Mansi says. This might not sound like a great deal, but pointing out that “time is brain” he adds that this could save over a hundred million neurons, making a meaningful difference to the patient’s health.

It will also mean that more thrombectomy devices will be used, and bundling the Viz software with Solitaire, as Medtronic is almost sure to do now, is a win for both parties. Terms of the partnership are not being released, but Viz AI reckons the deal will boost its reach beyond what it has achieved alone.

Since the software was granted US de novo clearance in February 2018 it has been sold to 200 hospitals. There could well be room for expansion in Europe: the Viz technology is not yet CE marked, with Mr Mansi saying this should occur next year.

He declines to say how much the Viz software costs, as pricing now comes under Medtronic’s aegis, though he says it is a subscription service rather than a one-off payment.

One interesting aspect is that, though the software is approved by the FDA, Viz AI has had no interest in obtaining reimbursement for it. This is because despite the subscription fee Mr Mansi says the technology pays for itself rapidly, getting patients out of hospital sooner.

“Medicare reimburses the thrombectomy device, as does Nice in the UK, because it has such a big benefit. Our software is paid for by the hospitals because they see the clinical benefit of doing more of these procedures and doing them faster,” Mr Mansi says. “They’re willing to pay for the software.”

The partnership with Medtronic ought to increase Viz AI’s sales. But the company might still be in need of separate investment, having received less than $30m so far from venture investors include Google Ventures. Mr Mansi hints that a further infusion if cash might be on the cards “in the coming months”.

That said, Medtronic does have a history of buying smaller groups in which it has invested, or with which it has signed other types of deal. It could be that all Medtronic wants from this deal is improved Solitaire sales. However, if the deal results in a large and reliable revenue stream from the Viz tech, Medtronic might decide to bring the software in house.

Intuitive faces down the competition