Another endorsement as Unum goes beyond the CAR-T

As competition among the many CAR-T players shifts investor focus towards safety switches and follow-on approaches like engineered T-cell receptors and tumour-infiltrating lymphocytes, one company – Unum Therapeutics – is looking to go further still.

The private start-up already counts Sanofi’s venture arm as an investor, and yesterday it got its second key endorsement in the shape of Seattle Genetics. If Unum’s science can overcome some of the shortcomings of current cell therapy approaches, the simple logic of combining a chimaeric receptor with an antibody could become an extension of Seattle’s work on antibody-drug conjugates.

This is surely why Seattle signed on the dotted line. Under yesterday’s tie-up the company handed across $25m up front plus a commitment to put $5m into Unum’s next private financing; Unum came out of stealth mode last October with a $12m series A round that was led by Fidelity and Atlas Venture and included Sanofi-Genzyme Bioventures.

Unum’s focus is a variation on the autologous T-cell therapy theme, using transfection to express a chimaeric receptor on a patient’s T-cells. But this receptor is not a CAR, specific for a single antigen, but rather an antibody-coupled T-cell receptor (ACTR) designed to bind any appropriately designed antibody. 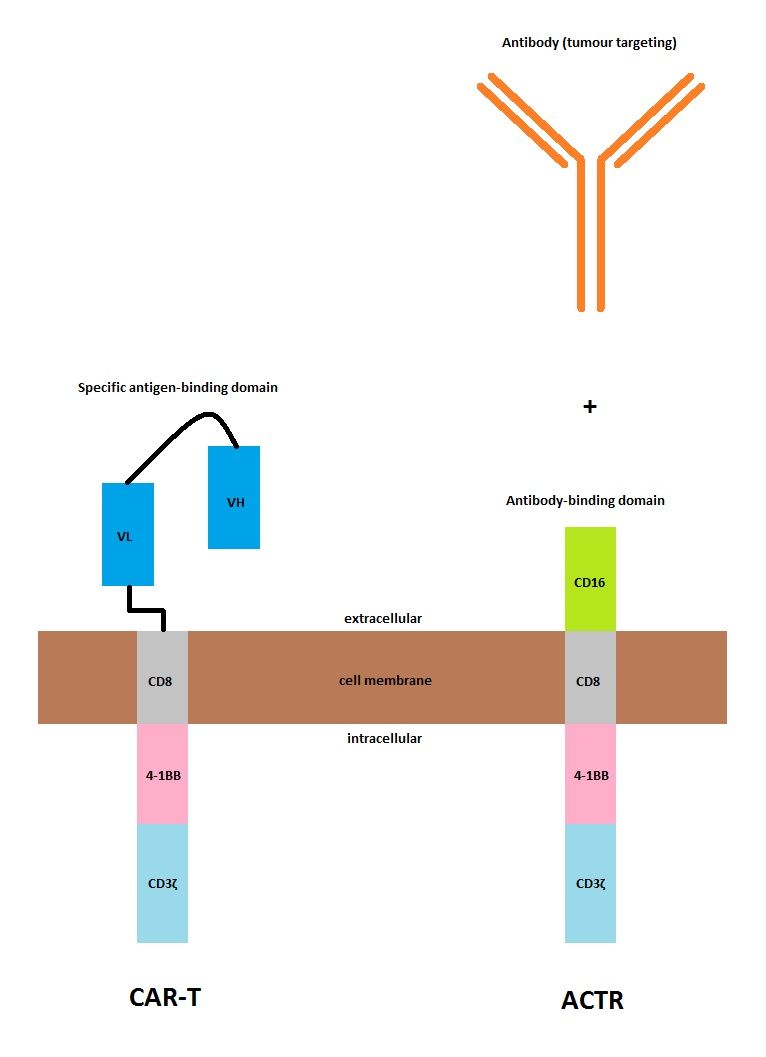 The beauty of this is that only a single ACTR construct is needed to target a wide variety of tumour antigens. This is because it is the co-administered antibody that latches onto the tumour antigen, and thus specificity is governed by the antibody; the ACTR simply binds the antibody, and triggers T-cell-mediated killing.

Unum’s ACTR has transmembrane and intracellular co-stimulatory domains that are identical to a CAR’s, but its extracellular section comprises CD16, a receptor present on natural killer cells that acts as an antibody-binding domain.

This approach can also be seen as a sophisticated form of Seattle’s antibody-drug conjugates, the most advanced of which is Adcetris, whereby an antibody directed towards a specific tumour epitope is physically linked to a cytotoxic payload. Unum and Seattle will initially work on ACTRs co-administered with two Seattle antibodies.

While this puts Unum well behind CAR-T players like Novartis, Juno and Kite, its novelty hints at some serious advantages. CAR-Ts have yet to prove themselves in targets beyond CD19, for instance, and an alternative approach like Adaptimmune’s engineered T-cell receptors is, unlike CARs and ACTRs, limited to antigens presented on other immune system cells.

Meanwhile, Lion Biotechnologies’ tumour-infiltrating lymphocytes could be prohibitively expensive and limited to tumours that express a wide variety of neoantigens. Attention has also turned to allogeneic approaches like Cellectis’s CARs, as well as suicide switch technologies like Bellicum’s designed to limit toxicity.

The ACTR approach requires no inbuilt safety switch; in the event of toxicity the mere cessation of antibody dosing could be sufficient to make the therapy inactive.

So what are the drawbacks? One might be intellectual property: Unum’s co-founder Dario Campana was previously at St Jude Children's Research Hospital and worked on the CD19 CAR that was taken into the clinic by the University of Pennsylvania’s Dr Carl June and formed the basis of litigation between Juno Therapeutics and Novartis (A settling CAR-T development, April 7, 2015).

Unum’s chief executive is Chuck Wilson, who formerly worked at Novartis and drove the CAR-T alliance between the Swiss group and the University of Pennsylvania.

Still, any patent issues will only come out once projects advance in the clinic. For now Unum’s great promise is its potential to augment the activity of an antibody in solid tumours – the holy grail of cell therapy, and one in which CAR-Ts have failed to make a mark.

Results of the pilot study of ATTCK20 will be awaited keenly, though to relate them to solid tumour work will require a leap of faith.

EP Vantage has published a broad overview of the current opportunities and risks in the CAR-T space. A free copy of the report is available by download.

For Gilead Kite is no Pharmasset