Approval for Helius’s neuromodulator hangs in the balance

The failure of Helius Medical Technologies’ Portable Neuromodulation Stimulator (Pons) device in its approval trial is a blow not just to Helius – its shares were down 26% yesterday – but to all of us who enjoy more off-the-wall medical devices.

The Pons system is intended to treat severe balance problems in patients with traumatic brain injury by sending electrical impulses to the tongue. The device is worn like a collar, with a cable that runs to an electrode array held in the patient’s mouth. The company intends to push forward with US clearance despite the trial miss, and the nature of the failure means that it might have a chance of getting it. 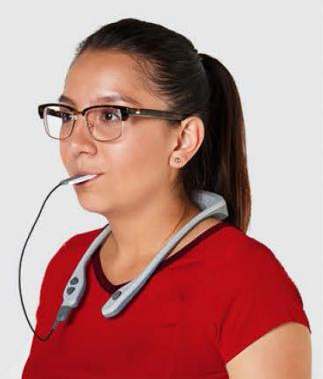 The double-blind trial enrolled 122 patients with chronic balance deficit due to mild to moderate traumatic brain injury. These were treated for five weeks (two weeks in-clinic and three at home) with physical therapy, and were randomly assigned either a high-frequency Pons device – the active arm – or a low-frequency Pons device as control.

Not such a sham

Patients were designated responders if their composite score on the sensory organisation test (SOT) improved by at least 15 points from baseline. There was a trend toward a higher response rate in the high frequency group (75.4%) compared with the low frequency group (60.7%), but at a p value of 0.081 this was not statistically significant.

Helius is still holding out hope for approval, saying that the study failed because the low-frequency device worked too well. Patients in the low-frequency arm showed significant improvements in SOT scores over baseline (p<0.025).

This, plus the device’s clean safety profile – there were no adverse events and falls were reduced in both trial arms – might well enable it to get a pass from the FDA. The company expects to submit a 510(k) application in the first half of 2018, which could enable market clearance in the second half.

The question is what kind of reception the device might get from patients and payers. For the former group one concern will surely be the fact that using it makes one look rather odd. Doubtless many patients do not care how they look if their walking is improved – though uptake rates for technologies such as hearing aids show that aesthetic concerns are not easily dismissed.

For the latter group the question will of course be cost. It is more than possible that having done one trial for approval Helius could end up doing another to prove cost effectiveness.

Boston nerves itself for US launch of spinal cord stimulator