Medtronic bets on flexibility for its surgical robots

The long-awaited robotic surgery system is designed to open up the market.

Medtronic’s Hugo soft tissue surgical robot system will not reach market until 2021 at the earliest, but the company has already set out an aggressive pricing aim – and with the technology’s merits unproven as yet, pricing might be the group’s best bet at taking on Intuitive Surgical.

The goal is to compete with Intuitive for new customers rather than to take share from the incumbent, which would be almost impossible. Medtronic’s system’s innovative modular design could appeal to customers that have previously not been able to afford this type of technology, but ramping sales will be a long, hard grind.

The unnamed system will go up against Intuitive’s da Vinci franchise, by far the most popular surgical robots with around 5,000 machines installed in hospitals worldwide. Intuitive sells its systems for a large up-front fee – between $600,000 and $2m apiece, with an average price of $1.4m – plus extra charges for the single-use instruments. Medtronic said it would also use this model, and that the costs would be comparable.

This is in marked contrast to CMR Surgical, which will charge its customers a rolling subscription when its Versius device launches (With new unicorn status, CMR Surgical sets profitability target, September 17, 2019). European launch is imminent, CMR told Vantage last week, putting the UK firm well ahead of Medtronic – but CMR is minute compared to Intuitive and Medtronic, and will face a significant marketing challenge.

That said, both CMR and Medtronic are focusing on the same pricing angle in one sense: price per procedure. Both groups say it is crucial to get this level with the cost of manual laparoscopic surgery, which – bearing in mind the sizeable additional cost of buying or leasing the machines – can only be done by increasing the speed of treatment.

This might be easier said than done. Research published in Jama suggested that robotic-assisted laparoscopy was significantly more expensive than manual procedures, and that one of the main drivers of this was longer use of the operating theatre, with the robotic procedures taking an average of 51 minutes longer to do.

That study dates from 2017 and concerns only resection procedures for rectal cancer; it is possible that robotic procedures can be done more quickly now, or that other operations are faster. But, overall, robotic surgery is still generally considered to be more expensive than manual procedures; Intuitive bases its value proposition on the lower rates of complications it says occur when its systems are used.

Medtronic has some experience of robotic surgical technology thought its investment in, and later acquisition of, Mazor Robotics, which makes a much smaller system dedicated to spinal procedures (Medtronic spends $1.6bn to finish what it started with Mazor, September 21, 2018). But competing with Intuitive, which enjoys economies of scale in terms of manufacturing thanks to its nearly 20 years on the market, will not be easy. 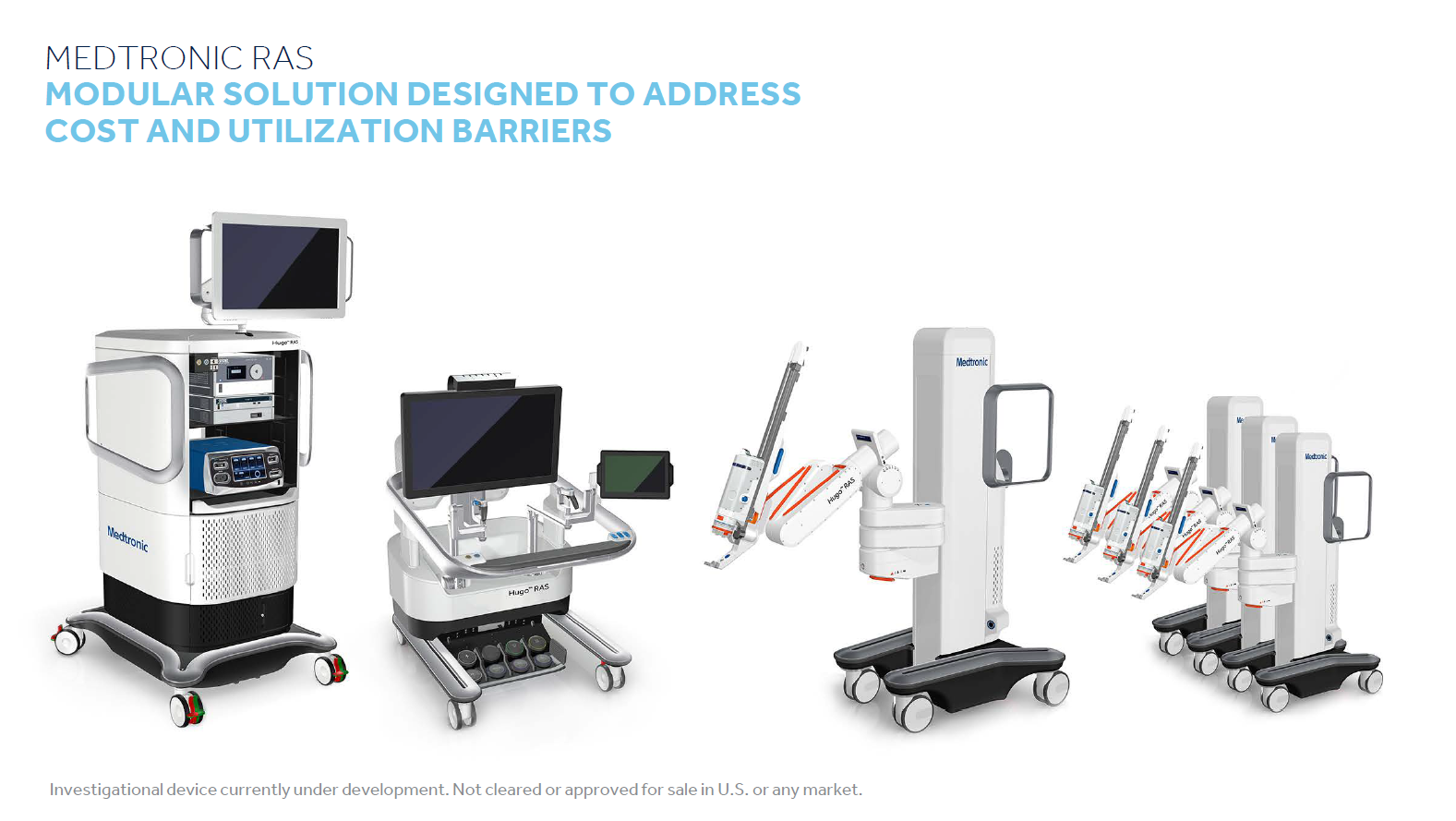 Medtronic has designed its new system to be modular and more portable than Intuitive’s. Each of its four robotic arms is mounted on its own cart, meaning the surgeon only need use two or three for less complicated operations. Any spare arms could be wheeled to a different operating room for use in another surgery. This is in contrast to Intuitive’s offering, which tends to consist of one very large immobile machine with four arms.

Ultimately the fate of Medtronic’s product is in the hands of surgeons. The long-established da Vinci systems give Medtronic’s machines a clear bar to aim for, and if they fall short they will not sell, particularly if there is no price difference.

Launch is planned for late 2019 or early 2020 outside Europe and the US. CE mark is expected in early 2021, with FDA approval late the same year; the group will then pursue further approvals for additional indications.

Stifel analysts expect Medtronic to focus on hospitals with underused robotic systems as well as those that have so far been priced out of the market.

They say launch of the system would be slow initially, and have added $34m to their 2021 forecasts for Medtronic. This figure is the forecast ex-US sales from the company’s minimally invasive therapies group, into which the robotic system will fall. In 2022 the total uptick in sales will be $111m, the analysts said, including some incremental US contribution from the minimally invasive therapies group in the second half.

Intuitive had a turnover of $3.7bn last year. If Medtronic hopes to match this kind of robotic revenue, it has a long road ahead of it.

J&J tries to strike the right note with Ottava

Corporate investing plays an ever bigger role in medtech

Medtronic spends $1.6bn to finish what it started with Mazor