Vantage has today published a detailed report into first-line lung cancer, discussing key upcoming trial readouts and regulatory decisions, and putting into context the developments that have seen Keytruda consolidate its dominant position.

After the recent failure of Astrazeneca’s Mystic study investors following developments in first-line lung cancer have one further key event to look forward to this year: a US approval decision over Roche’s Tecentriq combined with Avastin and chemotherapy.

This, a new report published today by Vantage asserts, is the final remaining near-term threat to Merck & Co’s Keytruda, which will otherwise stand as the immuno-therapy with an unchallenged hold on this lucrative use. The report also looks at the small but steady march of targeted small molecules, and considers the risk of the US FDA abandoning what has so far been a very lenient approval stance.

Already there are hints that not all immuno-therapies are immediately approvable: Roche’s own filing had been due a decision by September 5, but a request for additional information pushed this back by three months (US agency to rule on Tecentriq’s most important use, August 15, 2018).

A similar fate befell Bristol-Myers Squibb, which is awaiting approval of Opdivo plus Yervoy in tumour mutation burden-high NSCLC, a use the report concludes to be a long shot.

The study used to support this, Checkmate-227, arguably showed a benefit in TMB-high patients, but an additional analysis revealed a virtually identical hazard ratio for survival in TMB-low subjects. This made Checkmate-227 one of several Bristol missteps that have caused Opdivo’s lead to vanish, and allowed Keytruda to become entrenched.

The report compares the results various companies have reported across a variety of first-line NSCLC trials, and presents the current treatment cascade in a clearly understandable flow chart. It also suggests how this increasingly complex paradigm might develop if testing for gene signatures, mutations, PD-L1 expression and other biomarkers becomes widely used. 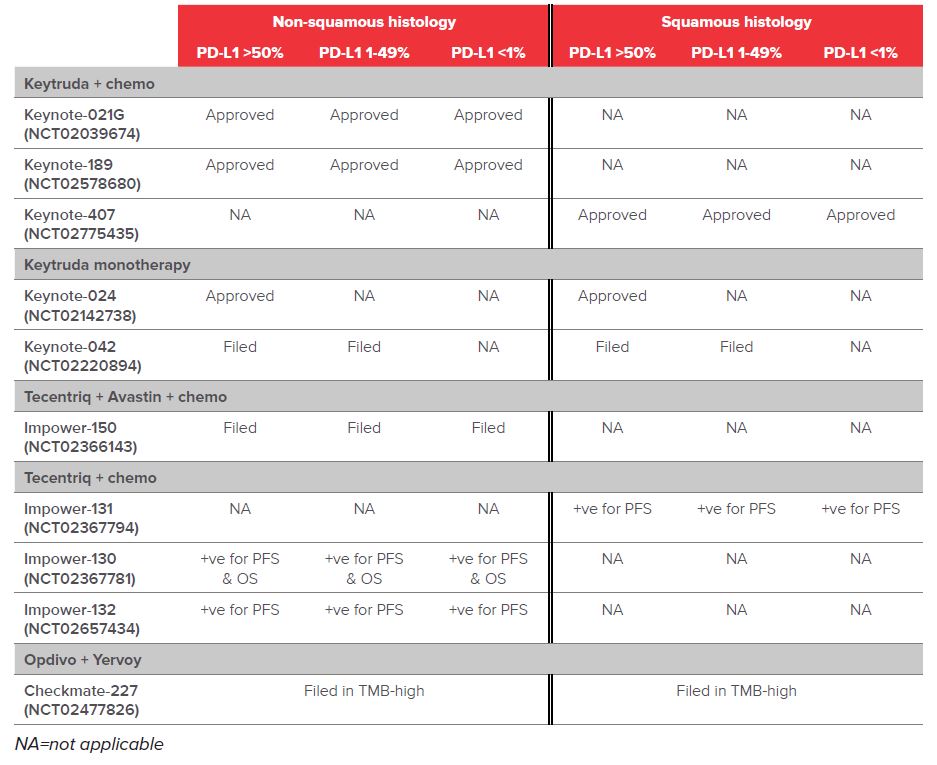 Already the first-line treatment of NSCLC driven by specific genetic mutations has become big business, yielding the likes of Pfizer’s Xalkori and Roche’s Alecensa in Alk-positive tumours, and Astrazeneca’s Tagrisso in EGFR. Just this week Loxo/Bayer’s Vitrakvi got the US green light for tumours carrying NTRK gene fusions.

Small-molecule kinase inhibitors of this sort represent one of the few ways to bypass immunotherapies as these increasingly dominate first-line NSCLC. Other strategies include the separate setting of stage III, non-metastatic disease, where Astra’s Imfinzi is at present the only player, thanks to results of the Pacific trial.

In the metastatic setting there are of course other trials set to read out, including Bristol’s Checkmate-9LA, Astra’s Neptune and Pfizer/Merck KGaA’s Javelin Lung 100. Apart from the problem that time is running out for Keytruda's competitors, however, such studies face the confounding effect of second-line immunotherapy; moreover in the US it could soon become difficult to offer first-line patients an experimental treatment that does not include Keytruda.

It is hard to escape the notion that for these competitors the boat has sailed, and Keytruda has left them fighting over what is at best a vanishingly small slice of the pie.

The Vantage report First-line lung cancer: can Keytruda be stopped? is available via free download.

Asco – IO strategy in mesothelioma finally gets mapped out