Abbott’s latest aortic valve launch is unlikely to gain it a meaningful slice of the market; meanwhile, Edwards’ attention has switched to tricuspid.

The transcatheter aortic valve market is generally regarded as mature these days, with Edwards Lifesciences and Medtronic occupying around 80% of the European space between them. This has not stopped the entry of new devices, and the most recent is Abbott’s Navitor, CE marked yesterday.

Abbott already sells an aortic valve, Portico, which was CE marked in 2012 when it still belonged to St Jude Medical. But the company’s sales fall far behind the two leaders. And Edwards this weekend showed how it intends to keep ahead of the pack beyond the aortic space, with early data on its tricuspid valve, Evoque.

Navitor is approved in Europe for patients with severe aortic stenosis to whom surgical valve replacement poses high or extreme risk; its USP, Abbott says, is that it has best-in-class deliverability, particularly through small vessels.

Clinical data on the valve have yet to be released, meaning there is little reason for European interventional cardiologists to opt for this device over Edwards’ Sapien range or Medtronic’s CoreValve franchise, both of which are long-established as highly safe and effective. Navitor is in a 550-patient global clinical trial called Vantage, data from which are doubtless intended to support US approval, but this is not expected to report for another couple of years.

Abbott will hope for better results in Navitor’s Vantage trial than it got from Portico’s pivotal US study. Portico was shown to be statistically non-inferior to Sapien and CoreValve, but did not perform quite as well as them (Abbott’s aortic valve disappoints, October 1, 2019). 18 months later, it remains unapproved in the US.

Edwards' market leader status in the aortic space is pretty much unassailable, and the company is now looking to another valve: the tricuspid. At the virtual ACC meeting at the weekend it presented data on Evoque, showing that the tricuspid prosthesis significantly reduced the severity of regurgitation and improved patients’ quality of life at 30 days.

The data came from the first 56 patients in the early, single-arm feasibility study, Triscend, which will go on to enrol a total of 200 patients. A month after implantation of Evoque, tricuspid regurgitation reduced to mild, a trace or none in 98% of patients; at baseline all patients had regurgitation classified as moderate, severe, massive or torrential. 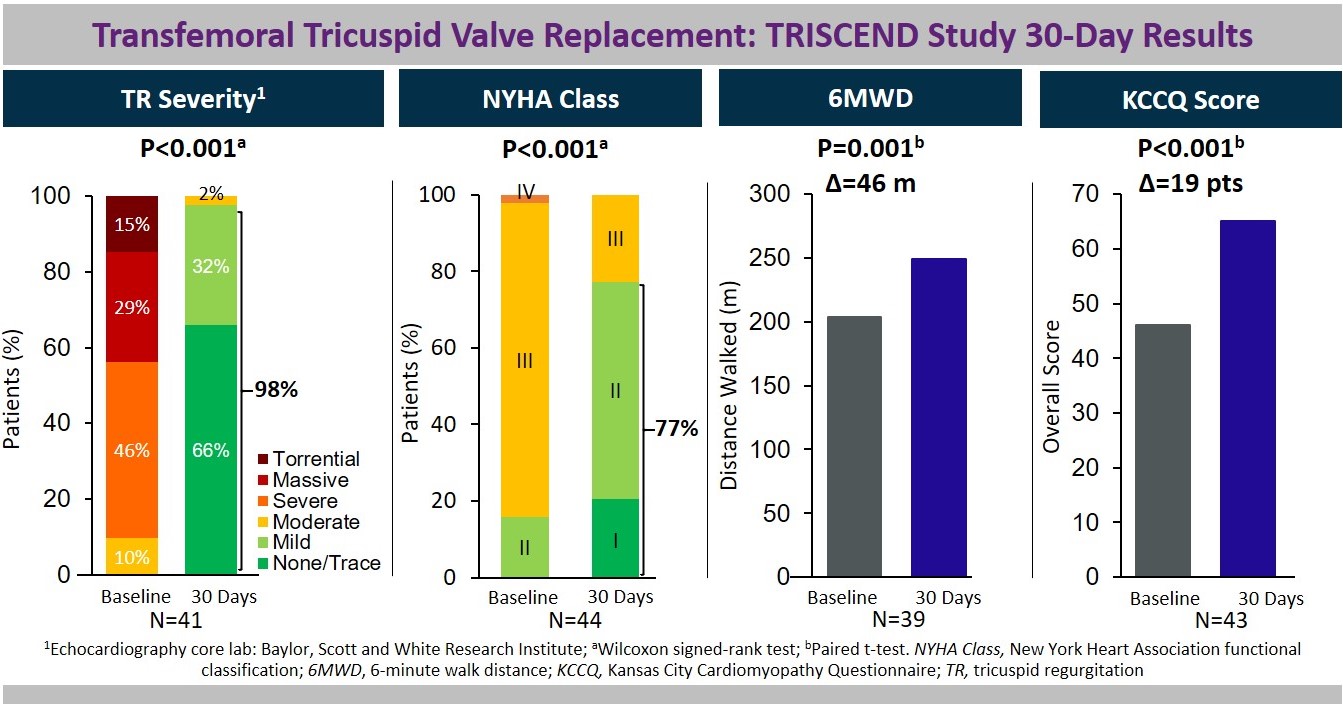 The composite major adverse event rate was 22.6%, with one cardiovascular death, two non-tricuspid reinterventions, one major access site/vascular complication, and 12 severe bleeding events, none of which were life-threatening.

These data are promising but come from an early cut of an early trial; Evoque is some way from approval yet. A pivotal trial, Triscend II, has just begun, and will compare Evoque with drug therapy, since no transcatheter tricuspid valves are yet approved.

Final data from Triscend II will take another three years or so to appear. By then the tricuspid market might be shaping up to be competitive – Medtronic’s Intrepid valve is in feasibility trials here, for example. But the aortic market will probably be much as it is now: Edwards in the lead, Medtronic fairly close behind, and Abbott a distant third.