AHA 2019 – The Medicines Company reaches for the stars

Two more Orion trials have hit neatly and cleanly, and now success will be largely down to pricing.

The first cholesterol-lowering RNA interference therapy looks like it’s on the way. Full data from the Orion-9 and -10 trials confirm that The Medicine Company's inclisiran has comparable lipid lowering efficacy to the similarly acting anti-PCSK9 antibodies, Repatha and Praluent.

The company’s shares surged 19% in early trade today to a record high on rumours of takeover approaches, with Novartis named as the leading contender.

The Medicines Company is to file inclisiran with the FDA this year, and an EU application will follow a couple of months later. The group believes inclisiran represents a “vastly different value proposition” than the antibodies thanks to its more convenient dosing. Whether doctors or payers agree is an important question, and much will depend on the price at which the company chooses to launch.

The new data are almost certainly good enough for approval. In Orion-10, results from which were presented at the American Heart Association meeting on Saturday, inclisiran reduced LDL-C by 58% over placebo at 17 months – better than the 54% seen in the very similar Orion-11 trial in September (ESC 2019 – Medicines Company impresses with inclisiran, September 2, 2019). 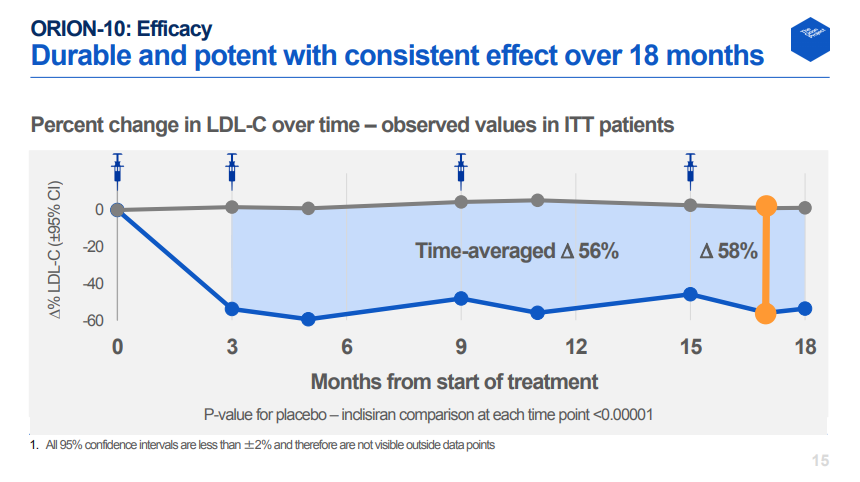 The 56% placebo-adjusted reduction in LDL seen when the Orion-10 and -11 data were pooled is in line with data on Repatha and Praluent, which showed placebo-adjusted LDL lowering of 55-58%.

The Medicines Company also looked ahead to the Orion-4 study, its vast cardiovascular outcomes trial which is due to report in around five years’ time. An exploratory analysis of the pooled Orion-10 and -11 data showed a 26% risk reduction in cardiovascular events. Using this, the company projected a five-year relative risk reduction in Mace rates of 30% for Orion-4, though the slight imbalances in CV death and heart attack/stroke in Orion-10 might give some pause.

The other AHA data came from the Orion-9 study in heterozygous familial hypercholesterolaemia. Presented yesterday, these showed an LDL lowering of 50% at 17 months. Again safety was clean, and the data in this slightly different population could expand the potential reach of inclisiran. 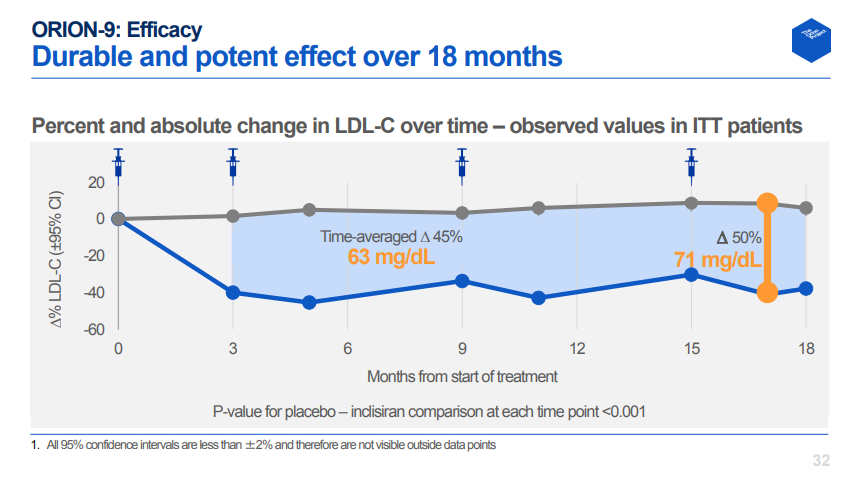 On a conference call the Medicines Company made much of the drug’s twice-yearly administration, comparing it to a ’flu vaccine and stating that it would solve the problem of dwindling adherence seen with Repatha and Praluent.

Be that as it may, pricing the drug will be a tricky line to walk. Amgen and Regeneron/Sanofi both had difficulty setting acceptable prices for Repatha and Praluent, and were eventually forced to settle for less than half of what they wanted (Regeneron and Sanofi play follow the leader on Praluent pricing, February 11, 2019).

It may be that this decision is someone else's headache, and despite the tripling in the group’s share price in 2019 an acquisition is considered a real possibility. Novartis management has so far refused to comment on its rumoured candidacy as buyer.

With data like these, it is feasible that big pharma groups with an interest in the cardiovascular space will be taking a serious look. But the Medicines Company will not be a cheap apple to pluck – as of this morning it had a market cap just shy of $6bn. Any notion that the inclisiran launch might depress that valuation could well give interested parties pause.