Albireo sets the standard for Mirum to hit

Mirum has it all to do after Albireo gets a result with lead project odevixibat in a rare childhood liver disease.

Albireo and Mirum are vying to get the first bile acid transporter inhibitor to market. And Albireo just scored a point against its rival with data for odevixibat in the rare paediatric liver disorder progressive familial intrahepatic cholestasis (PFIC).

Now Mirum knows what it needs to do with its lead bile acid transporter, maralixibat; the project is in the pivotal March trial in PFIC, set to complete in December. However, Mirum is targeting a narrower patient population and EvaluatePharma sellside consensus currently expects odevixibat to be the lead bile acid inhibitor by 2026.

In early trade shares in the Astrazeneca spinoff Albireo were up 47%; after an initial fall Mirum rallied and climbed a couple of percent.

Albireo looks like it has cleared a path for odevixibat’s approval in PFIC, a life-threatening disorder characterised by the build-up of bile in the liver. There are currently no approved drug treatments for PFIC; surgical options include partial external biliary diversion or liver transplant.

Pruritis, or itching, is one of the most troublesome symptoms of PFIC. This was one of the co-primary endpoints of Albireo’s 62-patient phase III study, Pedfic 1; the other co-primary was bile acid responses.

The study met both of these endpoints with a high degree of statistical significance. Pruritis improvement was defined as a one-point or greater reduction in a 0-4-point scale. 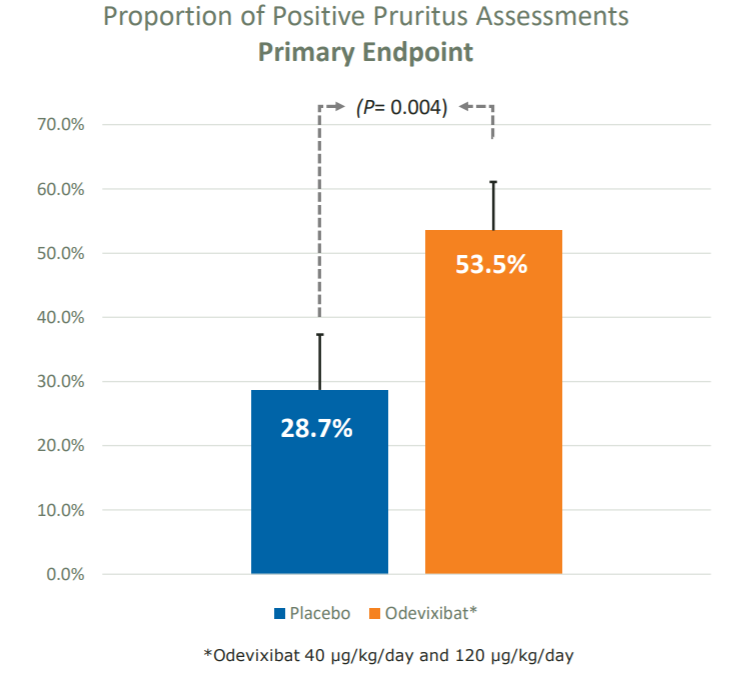 The improvements seen are clinically meaningful and represent a real improvement in patients’ quality of life, Professor Richard Thompson of King’s College London, the lead investigator of the trial, said during a conference call today. The ultimate goal is to prevent liver transplants, but it is too soon to know whether odevixibat can contribute to that outcome.

The primary analysis was pooled across both doses studied, 40µg/kg/day and 120µg/kg/day. However, Albireo executives said during the call that each dose, analysed separately, also demonstrated a statistically significant improvement over placebo on both co-primary endpoints. 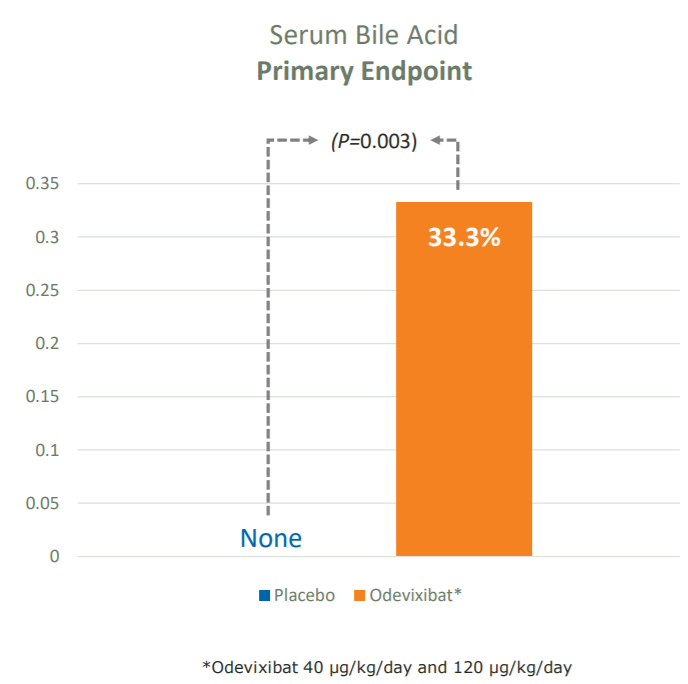 Perhaps just as importantly, odevixibat’s safety profile looked acceptable. Diarrhoea is a known side-effect of IBATs – indeed, elobixibat is approved for constipation in Japan, where it is marketed by Eisai. In Pedfic 1, diarrhoea occurred in 9.5% of odevixibat-treated patients versus 5% of those receiving placebo.

Albireo now plans to file odevixibat with regulators in PFIC early next year, and anticipates approval in the second half of 2021.

The company also has a phase III trial ongoing in biliary atresia, where Mirum is also planning to start a phase II study of maralixibat soon.

Overall, pipeline wise, Mirum is slightly ahead of Albireo – it has already started a rolling NDA for maralixibat in another rare disease affecting the liver, Alagille syndrome.

But in PFIC maralixibat is only targeting PFIC2 patients, who make up around half the total population. In contrast Albireo’s Pedfic 1 trial enrolled both PFIC1 and PFIC2 patients, and showed similar efficacy in both.

Professor Thompson reckons that odevixibat could be used in around 80% of PFIC2 patients and all patients with PFIC1. In rare diseases like PFIC, every little helps.

AASLD 2020 – Nash updates from Novo and Inventiva in focus

Rhythm hits its obesity endpoints after excluding some patients