Angst for Abbvie as Gilead scores with cast-off

Filgotinib delivers an important win in its first pivotal rheumatoid arthritis study, setting partners Gilead and Galapagos hot on the heels of Abbvie.

Gilead took quite a bet when it paid $300m upfront for a mid-stage asset that had been rejected by Abbvie a mere three months previously. The first phase III data to emerge on filgotinib suggests that the risk was worth taking: in rheumatoid arthritis, the Jak inhibitor looks able to hold its own on efficacy in a very competitive field.

Perhaps more importantly the results hint at a best-in-class safety profile – although as the least advanced agent in its class this picture could still change. Still, the results were enough to boost shares in Gilead and partner Galapagos this morning, and presumably have left Abbvie wondering it made the right decision.

There was a very good reason for Abbvie to walk away – back in 2015 its own Jak inhibitor, upadacitinib, was also looking good in mid-stage trials. Exercising its option over filgotinib would have cost it $200m, plus the sunk costs of any previous work on its in-house project, which presumably would have been abandoned (For AbbVie filgotinib becomes no-go-tinib, 25 September 2015).

As it stands for now the two agents, which both target Jak 1, look pretty similar on efficacy, the caveats of cross-trial comparisons notwithstanding. The trials listed below were conducted in patients who had not responded to biologics like the anti-TNFs, or who could not tolerate them – so a treatment resistant patient population – though trial design and patient demographics will of course be different. 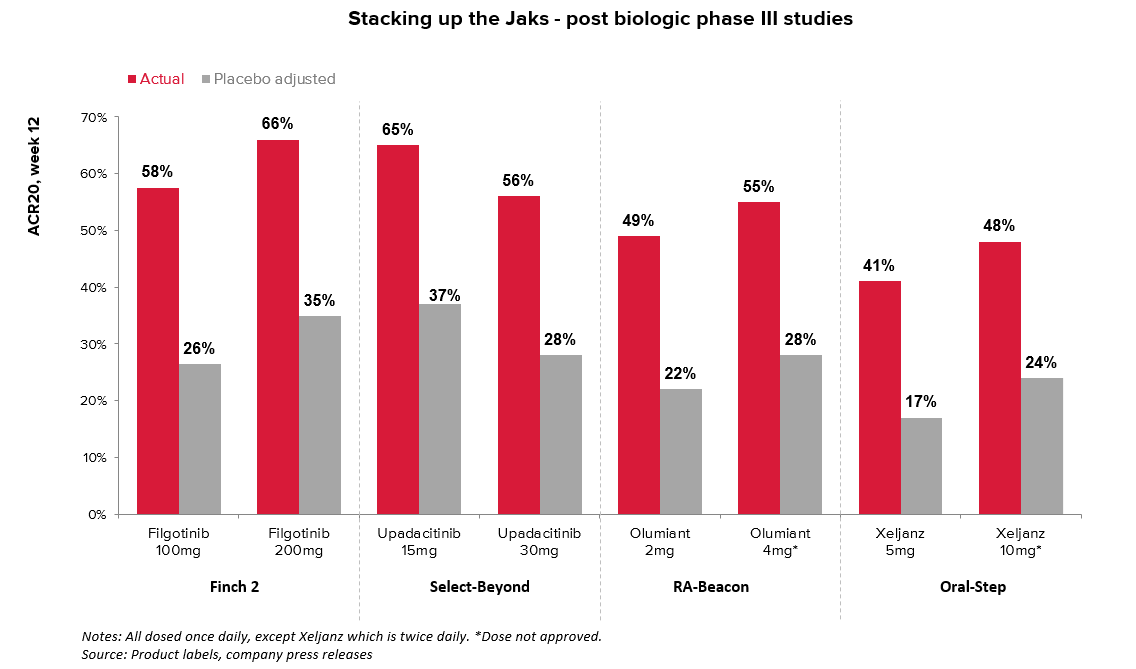 The relatively clean safety readings from Finch 2 confirm that safety will be the battle ground for these agents.

It is widely accepted that herpes zoster infections and other serious opportunistic infections are red flags for the class. Xeljanz from Pfizer and Eli Lilly’s Olumiant, which are already on the market, both carry a black box warning of the latter, and it looks likely that upadacitinib will too, should it make it that far.

The Abbvie asset has shown similar infection rates to the two marketed agents, Bernstein analysts estimate, while filgotinib has so far has recorded much lower rates, most importantly on the incidence of serious infections.

More crucial is the apparent absence of a thrombosis signal with filgotinib. Concerns about the risk of blood clots delayed Olumiant’s approval in the US, with the FDA finally refusing approval of the more effective higher dose. Meanwhile Abbvie has disclosed six pulmonary embolisms in the Select-Beyond study. The extent to which these were caused by the drug are still unclear, but the frequency at which these events occurred in a relatively small patient population has set alarm bells ringing.

Gilead today said that there were no incidents of deep venous thrombosis or pulmonary embolism in Finch 2, though one case of non-serious retinal vein occlusion was reported in the high dose filgotinib arm. The frequency of these events in future trials are pivotal to the commercial potential of filgotinib; four phase III studies are due to report next year.

Abbvie meanwhile has now reported top-line results from the five trials that comprise upadacitinib’s pivotal programme, and plans to file for approval before the end of the year. What regulators make of the data remains to be seen – approval of only the lower dose has to be one possible outcome.

For now the sellside has upadacitinib becoming the biggest challenger to the established incumbent, Xeljanz, but this picture is sure to shift after today's data. The economic case for picking upadacitinib over filgotinib is starting to weaken.